3 Examples of How Social Media Influencers Can Hurt Your Business

When you choose social media influencers, you don’t just want to go for the biggest fish in the pond. You want to choose influencers who align with your brand and company culture.

You also want to make sure that you craft smart and non-offensive campaigns with those influencers - or the backlash can be fierce.

Unfortunately, some companies haven't adhered to this mantra, and they've paid the price by using social media influencers who, in some way, have dented their brand. Either the fit wasn’t right, or they used them in a wrongheaded campaign, but they highlight what can go wrong when you don't think through every aspect.

In this post, we'll look at three examples of what can happen when you don’t choose your social media influencers wisely - and why they didn't work out as expected.

But Pepsi’s reach greatly exceeded its grasp after it premiered its campaign with a video that starred pop-culture icon Kendall Jenner.

In the video, Jenner is filming a photo shoot, when she sees a social protest that features young people from a diverse group of races who are facing off against police officers.

Jenner joins the protest, and in the climactic moment of the video, she approaches a police officer and hands him a can of Pepsi as a peace offering. This gesture causes the young protestors to cheer and hug each other as the police officer drinks the Pepsi.

Predictably, the video came under immediate fire on social media, for various reasons, including the fact that Pepsi was selling the idea that one drink could solve all of society’s ills, and that the catalyst for that misguided message was a privileged young woman who's never known hardship in her life.

Pepsi quickly pulled the video and apologized for missing the mark, but judging from the hundreds of Tweets that criticized the campaign – the damage was already done.

The takeaway is that Pepsi broke two cardinal rules of social media influencer marketing - not choosing the right influencer (no one believes Jenner is interested in social protest, because she hasn’t shown that side of herself yet), and expressing the wrong message (Pepsi can solve society’s problems). Some key lessons for all brands considering the option.

Naomi Campbell is a world-famous model and actress, who has spent years honing her brand as an ambassador of style and of fitness. Given this, it wasn’t so odd to see Adidas reach out to her as an influencer.

But the company’s Instagram campaign to showcase the release of its 350 SPZL kicks backfired in a big way when Adidas included its promotional instructions meant for Campbell’s private review on the actual Instagram post: 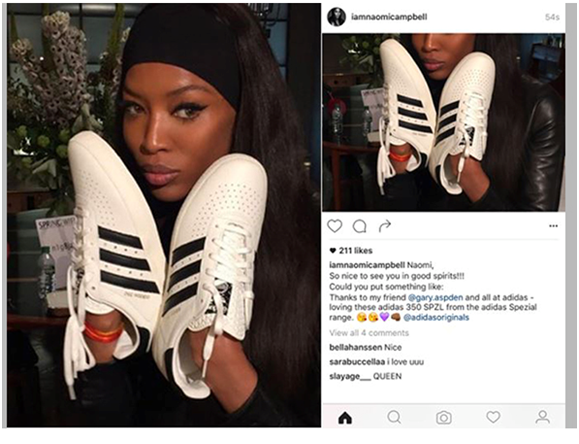 The last thing you want as a brand is to let your audience in on the way the sausage is made - in other words, keep your private campaign messages to your influencers off your actual campaign posts.

By not taking the time to delete its private instructions to Campbell as to how it wanted her to display the shoes, Adidas lost a ton of credibility with its audience. It’s hard enough to convince people that big influencers really believe in a product or service, so when this type of social media faux pas happens, your job gets that much harder.

The takeaway is to make sure that any direction regarding the style or tone of an influencer’s social media post never goes public. More importantly, you need to give influencers the leeway to ‘sell’ your product or service in their own unique way - after all, that’s why you partnered with them in the first place, right?

Bagging a big influencer can change the fortunes of a small business, or drive a successful business into the stratosphere, and that was clearly the goal when Microsoft was able to persuade Oprah Winfrey to take part in its social media launch of the Microsoft Surface.

What company wouldn’t want Oprah on its side? She's one of the most popular personalities in the U.S., a woman trusted for her judgment and taste. By all measures, Microsoft had gotten a homerun influencer.

But a funny thing happened on the way to world domination for the Microsoft Surface, because when Winfrey posted her endorsement of the new laptop, she did so from her iPad: 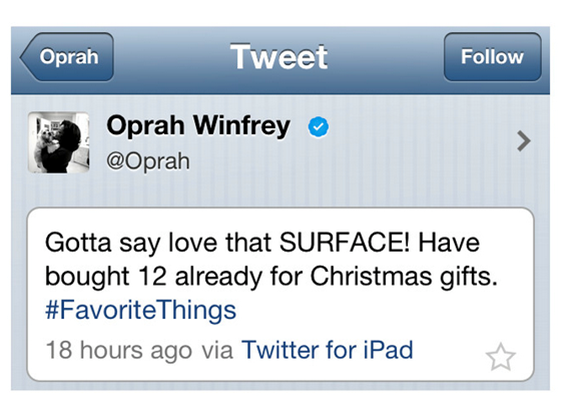 This tweet was sent to Winfrey’s 15 million Twitter follows, urging them to invest in the Surface - even though Winfrey herself was using a competitor’s mobile device to post her recommendation on social media.

The takeaway is that if you’re going to use an influencer of stature in your industry, it has to be the right fit. Just because someone's popular, and has millions of followers, that doesn’t mean that they're the right person to co-sign your product or service.

Your audience would rather you choose a lesser-known influencer who actually uses and loves your product or service, than a big name who is clearly just doing it for the money.

Authenticity is a big driver in social media marketing, and your audience will sniff out influencers who are in it for the money from influencers who've truly bought into your company’s culture.

The Size of the Fight In the Influencer

Influencers can lift your social media campaigns to new heights, but they can also dent your company’s credibility and authority if you choose the wrong one, or if you don’t communicate the right message through your messaging.

Remember that it’s not about how big your influencer is, it’s about the genuine passion and commitment that the influencer has for your products and services. That authenticity will shine through, and help you avoid costly social media misfires.