We’re now three months into Facebook’s News Feed shift, which re-weighted the platform’s infamous algorithm to put more emphasis on ‘person-to-person engagement’ over Page interaction. That change, along with other, smaller tweaks, has had varying impacts, with some publishers going out of business entirely (Little Things) and others reporting improved performance, seemingly against the odds.

Have you noticed any significant impacts on your Page reach? And if so, what can you do to improve it?

One of Facebook’s key points of emphasis within their changes – and aside from the major change to put more emphasis on direct engagement – has been to give local publishers more promotion.

The idea behind this is to use Facebook as a means of increasing civic engagement – Facebook, in response to reports that the platform had become a key tool in the spread of misinformation, has sought to increase the prominence of local content in order to help get people involved in local happenings, while also reducing the spread of less reputable news outlets by consequently giving them less space in feeds.

And while the initiative is still in development to some degree, thus far, the numbers don’t seem to have shifted for most local publishers in the regions where the change has been implemented, according to data from Nieman Lab. 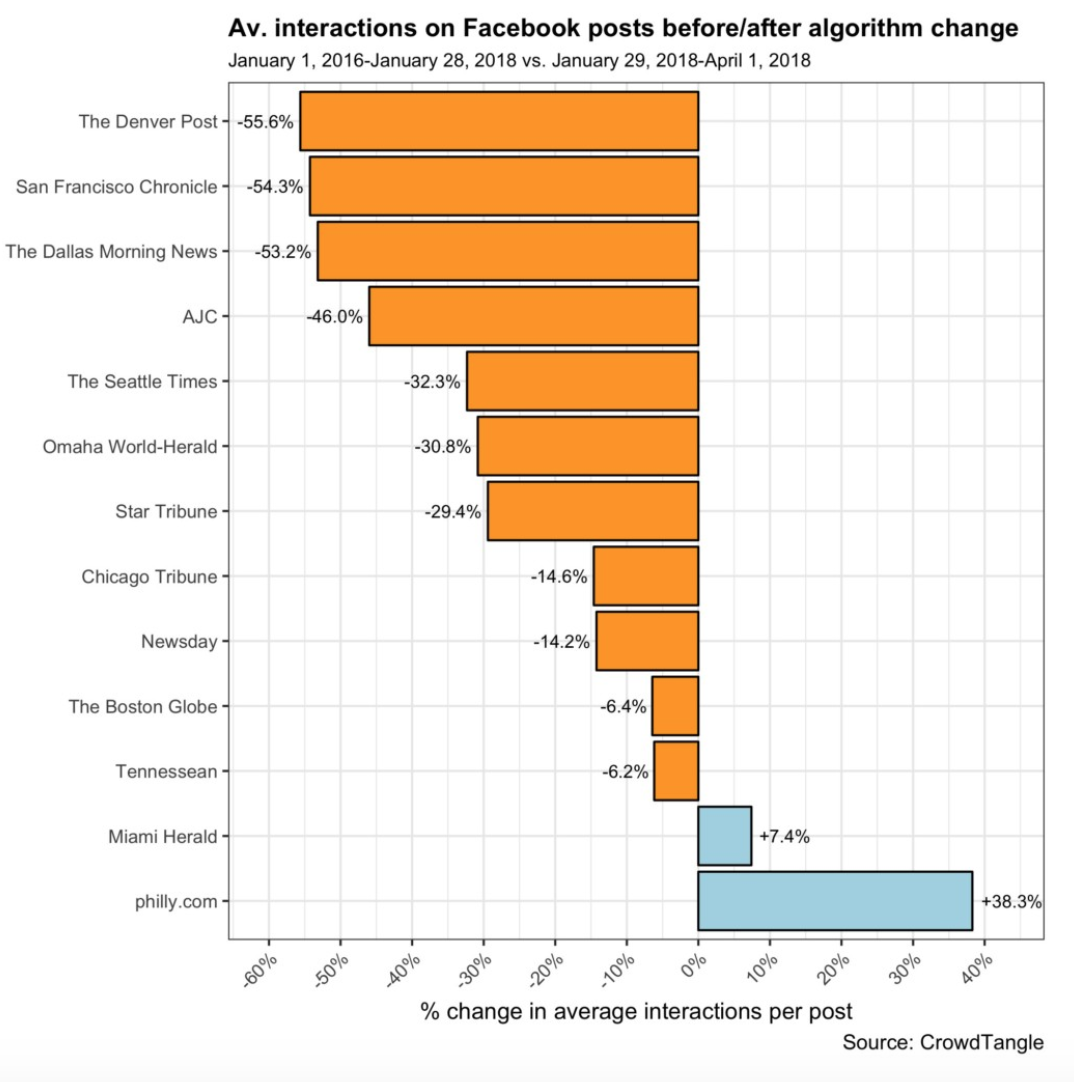 As you can see, the average Facebook interactions for most local publishers have decreased since the announcement of the change, some significantly so.

Now, there may be more to it than that - you’d have to investigate each on a case-by-case basis to understand the definitive causes. But the data here is pretty compelling – Facebook’s changes, thus far, are not helping local publications, and the declines they’re reporting are potentially indicative of the broader reach trends other Pages are seeing.

That’s a challenge, obviously – with so many publications and businesses now reliant on Facebook traffic, if these trends are indicative, that’s going to be hard to deal with.

As noted, the program is still in development - Facebook only expanded the main element of the program late last month – but so far, the numbers don’t paint a very positive picture for the News Feed changes.

2. Smart Businesses are Diversifying to Reduce Reliance on Facebook

Now, this one's something of a no-brainer, the most logical response any business could have to Facebook’s January announcement. As has been advised by any digital marketing expert worth his/her salt, more businesses are now looking to diversify their digital marketing strategies and reduce their reliance on Facebook, thereby better safeguarding themselves against future News Feed shifts.

There’s growing opportunity in a range of digital platforms, and if Facebook’s News Feed change highlighted anything, it’s that businesses need to reduce their singular reliance on the platform, which is now well known for changing the rules.

An example of this in practice – BuzzFeed has effectively built its business on Facebook, with its listicle and quiz-style content gaining huge traction on The Social Network. But BuzzFeed has been spreading its wings – as explained by AdWeek:

“…the company’s food-themed Tasty channel has expanded to YouTube (with 6.2 million subscribers), Snapchat Discover and a stand-alone application. To reach a larger audience for news coverage, BuzzFeed tackled Twitter, the social platform that’s best for tracking breaking news. It found a winning formula with its ‘AM to DM’ morning news show, which launched last September and is averaging more than a million views per installment.”

If BuzzFeed was seen as one of the leading brands to emulate when building a Facebook strategy, it would stand to reason that smart brands should also continue to follow their moves in spreading to other platforms. While you can’t, and shouldn’t, ignore Facebook and its 2 billion users, it makes logical sense to branch out, where possible.

And branching out is becoming more viable as other social platforms continue to find their niches. Pinterest has evolved from a social network to an eCommerce platform, following user trends. Twitter’s video strategy has become more niche, realizing that it can’t compete against the larger players, but it can put together a viable approach within smaller segments. Snapchat is refining its efforts to boost appeal with its younger audience, rather than trying to accommodate everyone.

The advertising and business options on each platform are also getting more advanced, providing increased opportunity to reach your target audience wherever they’re active.

Not every business has the capacity to spend the required hours building up their presence on every social network, but it makes sense to diversify where possible, and conduct more research into where your target market is most active - along with solidifying your own email lists.

And that then leads into the final point – while not every brand has the inspiration or talent to utilize Facebook Live, those that do are seeing significant results.

Check out this graph from socialbakers – those big spikes in organic post reach all correlate directly with the days when the company posted a Facebook Live video. 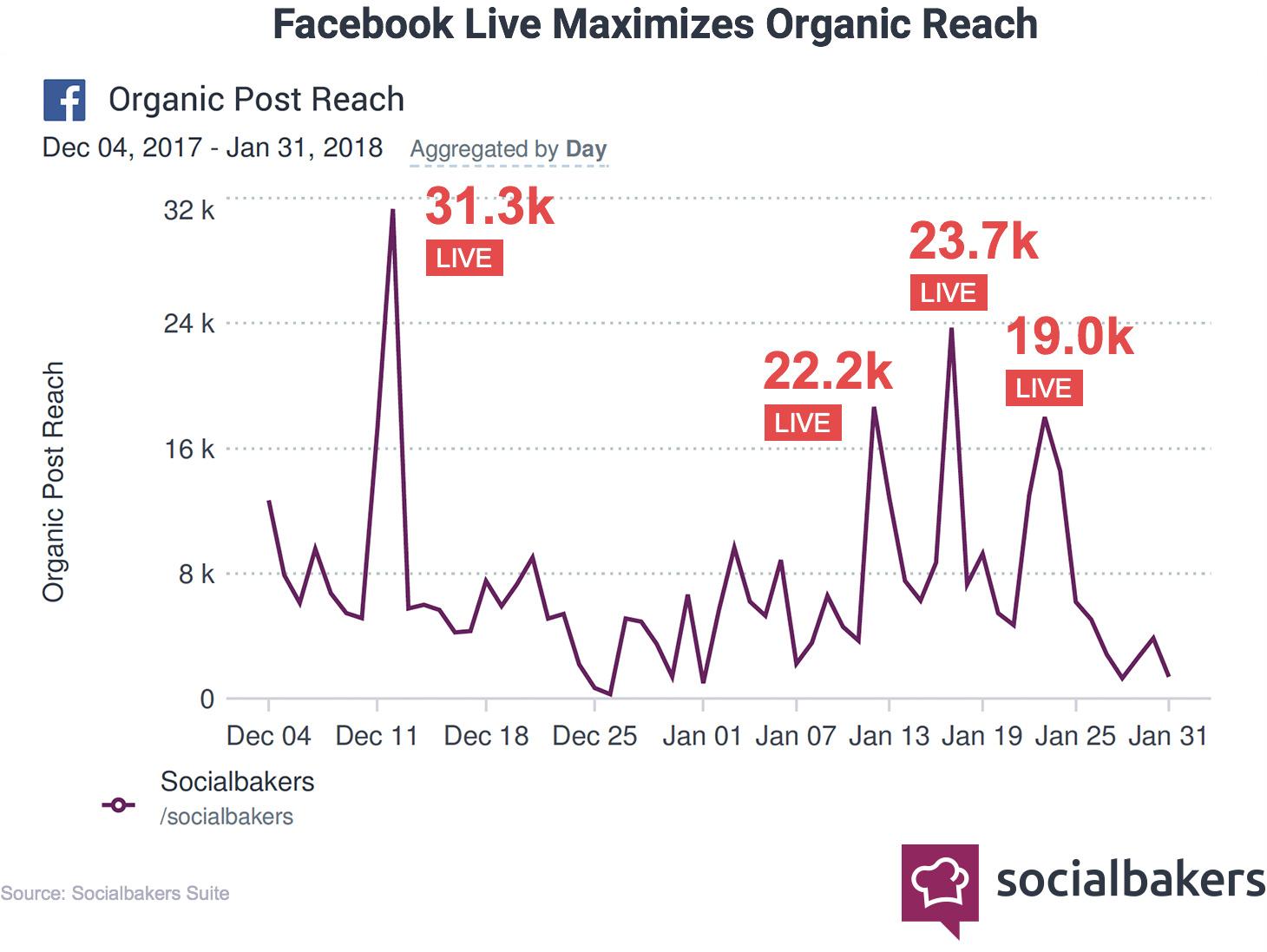 Of course, the emphasis on video makes sense within the context of Facebook’s wider plan to challenge YouTube, with the success of its Watch video platform somewhat reliant on having more video content to sort through and show to viewers. As such, it makes sense for Facebook to encourage video posting, and the data here clearly shows that Facebook is doing just that, even with their algorithm shifts.

It’s not for everyone, it’s not necessarily easy to create high-quality live-stream content. But the numbers show that it’s a winning strategy – if you need to maintain your Facebook reach, video, and live video especially, should be a key consideration.

These are just a couple of notes on the impacts of the News Feed changes, and we still may not have seen the full effects rolled out, particularly as Facebook re-assesses all of its processes in the wake of the Cambridge Analytica scandal.

The one thing we can rely on with Facebook is change, and you can expect more shifts moving forward, but right now, these trends could help inform your platform strategy, and better offset the potential traffic declines caused by algorithm updates.