Publishers have long seen it coming, and Facebook has made no secret about it, but now The Social Network has confirmed that they’ll be making concerted moves to show users more posts from people they know - and fewer posts from Pages.

Facebook CEO Mark Zuckerberg announced the coming changes in a post, outlining that their aim is to ensure that the time people spend on Facebook is ‘well spent’.

The key focus of Zuckerberg’s announcement is research which has shown that:

“…when we use social media to connect with people we care about, it can be good for our well-being. We can feel more connected and less lonely, and that correlates with long term measures of happiness and health. On the other hand, passively reading articles or watching videos -- even if they're entertaining or informative -- may not be as good.”

Facebook opened the discussion about this research last month, with their emphasis being not so much on using social media less, but using it better – which, in practice, is much harder to implement. But that’s what Facebook’s doing, they have absolutely no desire to stop people using Facebook, but by encouraging more engagement between friends – or indeed, forcing it to happen by changing the way the News Feed works – they could help make your Facebook experience more meaningful.

But the news for Pages is not so great.

As confirmed in the video:

“Now, we’ll also consider whether a potential interaction is between two people, or between a person and a Page. Person-to-person will be more valuable than person-to-Page. Connections with people in your network will get the biggest boost because interacting with people you’re close to is more meaningful”

Translation: Your Facebook Page reach is going to go down. How much will depend on how well your business is able to adjust to the changes, as they roll out.

How and when they’ll roll out, Facebook hasn’t said – you can likely expect a series of tweaks that will see Page reach decrease over time, further than it already has. Facebook has specifically noted that this change is not related to their News Feed test which is underway in some regions, where Page posts have been separated into an ‘Explore’ feed, and eliminated from the main News Feed.

So what can Pages do to counter potential reach declines? Facebook’s Head of News Feed Adam Mosseri offers some suggestions:

“Page posts that generate conversation between people will show higher in News Feed. For example, live videos often lead to discussion among viewers on Facebook – in fact, live videos on average get six times as many interactions as regular videos. Many creators who post videos on Facebook prompt discussion among their followers, as do posts from celebrities. In Groups, people often interact around public content. Local businesses connect with their communities by posting relevant updates and creating events. And news can help start conversations on important issues.”

The reach benefits of Facebook Live have been reported for some time – Live videos tend to generate more comments and interaction because people can do so in real time, so that’s an option to consider. Making better use of Facebook Groups, including Groups linked to Pages, is another avenue to investigate, with those discussions helping to prop up engagement.

But the bottom line is that you need to be generating engagement with your posts, as real conversation will be favoured by the system. How much, exactly, the algorithm will lean this way, we don’t know, but if you start seeing declines, this may be the cause.

While more recent developments relating to mis-use of Facebook’s systems to spread political propaganda are likely among the key drivers for this new push, it is worth noting that Facebook’s been seeking to address the decline in personal sharing for some time.

Back in 2016, The Information reported that Facebook had seen big declines in user engagement, with sharing of personal posts - like people's own thoughts and photos – falling some 21%. Concerned that this would eventually drive users away (ala MySpace), Facebook set up an internal taskforce to tackle the problem, which they’d labelled ‘context collapse’, and they’ve since implemented various News Feed tweaks designed to address it.

In 2015, Facebook announced a News Feed update which would ‘re-balance’ the amount of posts from Pages and people in the News Feed, then in 2016, they rolled out a change to prioritize updates from your friends and family above those from Pages and publishers.

As noted, publishers have seen this coming for some time - but while it’s no surprise, it’ll still mean website traffic takes a hit.

“Over time, we believe people will see more posts from people they’re connected to, and less content from publishers. We also expect overall time spent on Facebook to go down, but our goal is that the time people do spend on Facebook will be better.”

‘Rented land’ is the key term to keep in mind. You build your reliance on traffic from any one source and you’re at the mercy of their decisions. In Facebook’s case, this is more complex because the platform is just so big and all-consuming now – in fact, according to data from Parse.ly, Facebook is now the biggest driver of referral traffic, with Facebook and Google well above all others. 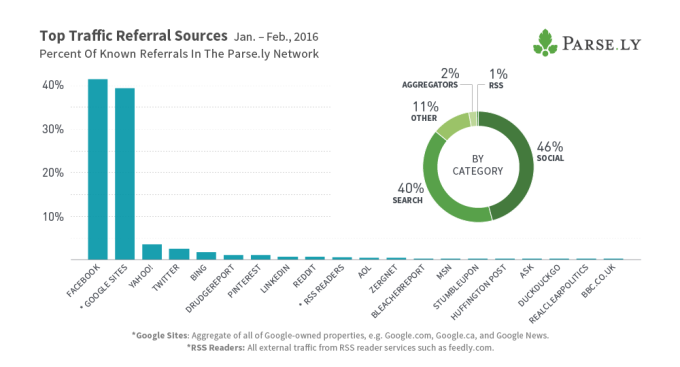 If Facebook pushes hard with this change, that graph could soon look a lot different – but whether you’re reliant on Facebook traffic or not, you’re still no doubt going to be seeking ways to maintain a balance of some sort and keep your site traffic flowing.

As noted earlier, your key focus will likely need to switch to engagement, on generating interactions amongst those in your audience. That means Pages will need to dedicate more time to responding to comments, in addition to scheduling posts; to engaging in Groups, in addition to maintaining their own Pages. There’s no cover-all answer, it’ll be the cumulative impact of various efforts, but generating conversation will be key.

Keep an eye on your Facebook Insights, and start exploring new ways to converse with your audience.

Also, what likely won’t be impacted? Ads. Pay-to-play may soon be the only way to go.