Facebook has released its Q4 and full year 2017 performance results, once again posting solid numbers across the board – though there are some interesting notes on the impact on their shift towards more ‘meaningful connections’ 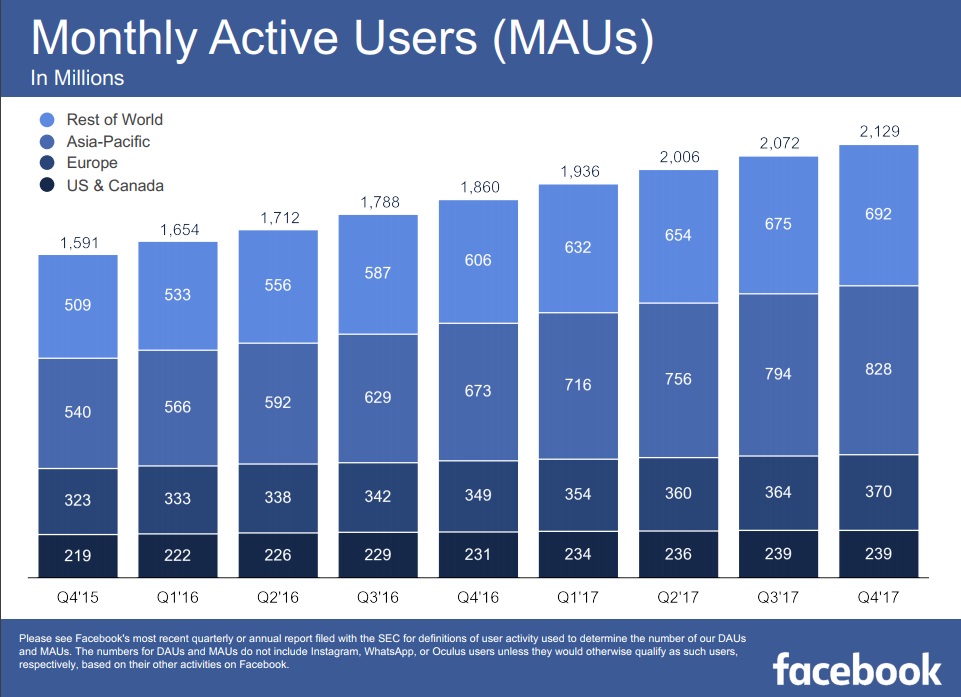 Facebook hit the 2 billion user mark in Q2, and has continued to stack on numbers, which is still surprising, considering the platform, you’d think, must be close to reaching saturation point.

Where Facebook has continued to see significant user growth is in Asia and areas that have not always had great connectivity. Through the ongoing development of their internet.org initiative, there’s no reason to assume Facebook won’t continue to see steady user growth for the foreseeable future.

That said, within this, questions can, and will continue to be, raised about the number of fake profiles on the platform.

As part of the investigation into foreign manipulation of social media platforms to drive political messaging, Facebook has come under scrutiny for the ways in which it can be used to influence large groups by fraudulent actors. Within that, Facebook had admitted that up to 60 million automated accounts are active on the platform, double what it had previously estimated. That, along with the continued updates on the actual impact of these accounts (after initially playing down the role their network played, Facebook has since admitted that Russia-backed content reached as many as 126 million Americans on Facebook during and after the 2016 presidential election), will have some questioning exactly how many active users Facebook has.

But either way you look at it, the platform’s reach and influence is staggering, and continues to rise – though there is one especially interesting note in their daily active user graph. 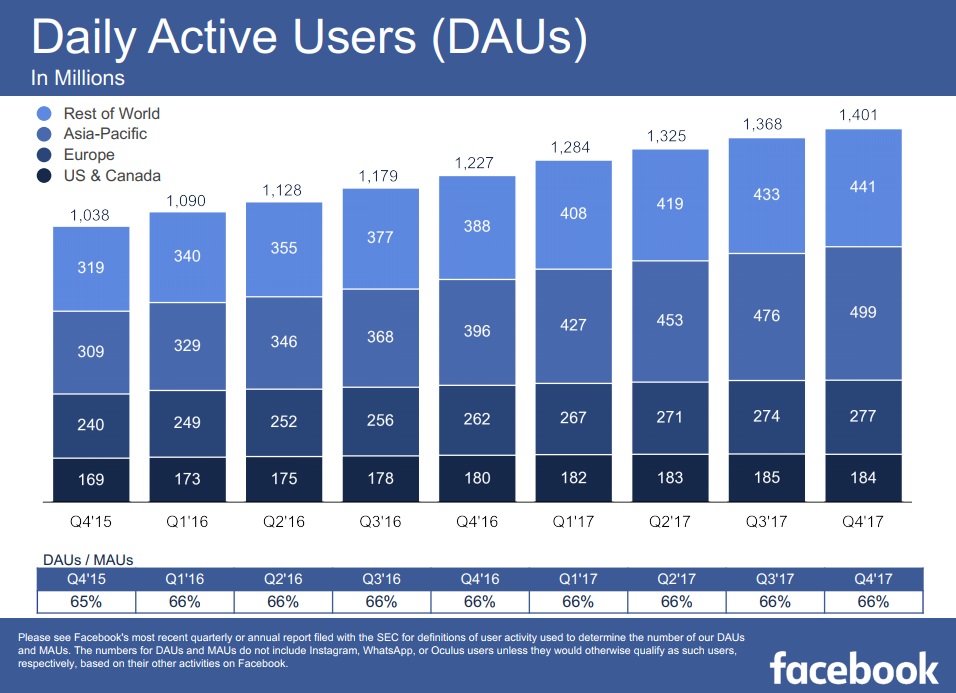 Facebook’s daily active users grew to 1.4b on average in December, an increase of 14% year-on-year – but check out the US and Canada segment. Facebook actually lost a million active users in the North American region in Q4, the only region, and time (at least in the frame shown here) Facebook has lost audience anywhere.

Could that be a sign of declining trust in the social network as a result of the ongoing investigation?

Could it be reflective of a wider shift towards messaging, and away from social networks?

It’s a relevant trend that’ll be worth keeping tabs on in future results. Overall, Facebook's daily user count growth dropped from 3.8% in Q3 to 2.18% in Q4, which Mark Zuckerberg addressed, to some degree, in his accompanying statement (more below).

In terms of revenue, Facebook continues to print money, posting a $12.97 billion result for the quarter - up 47% year-on-year. 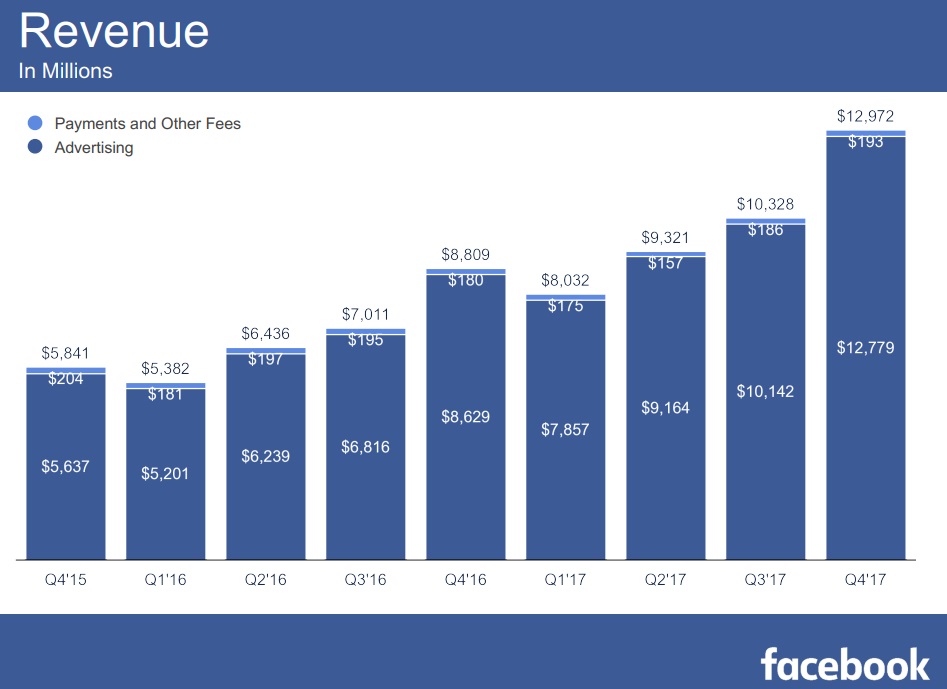 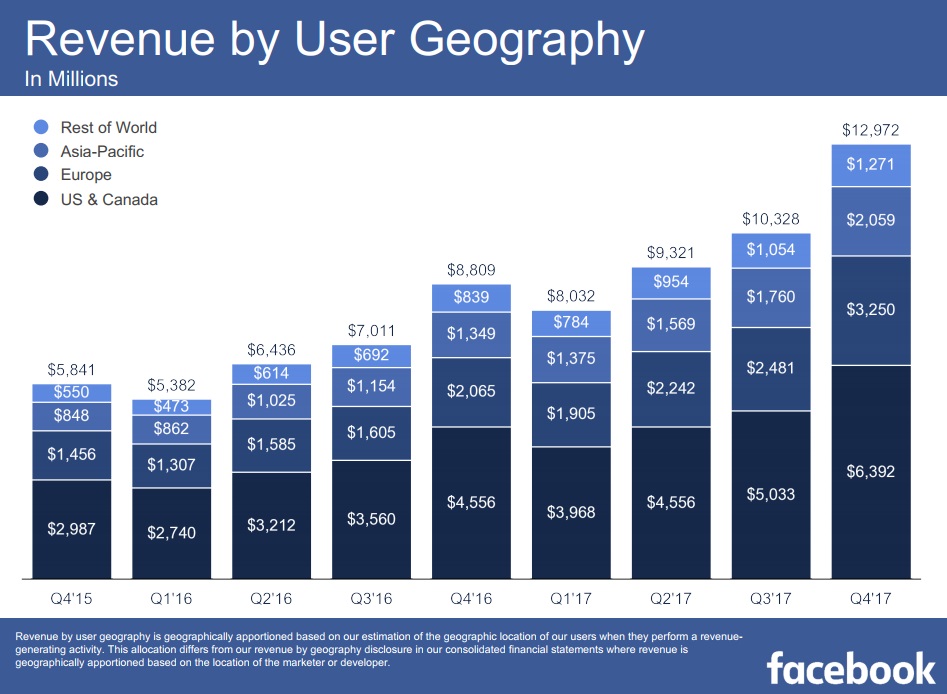 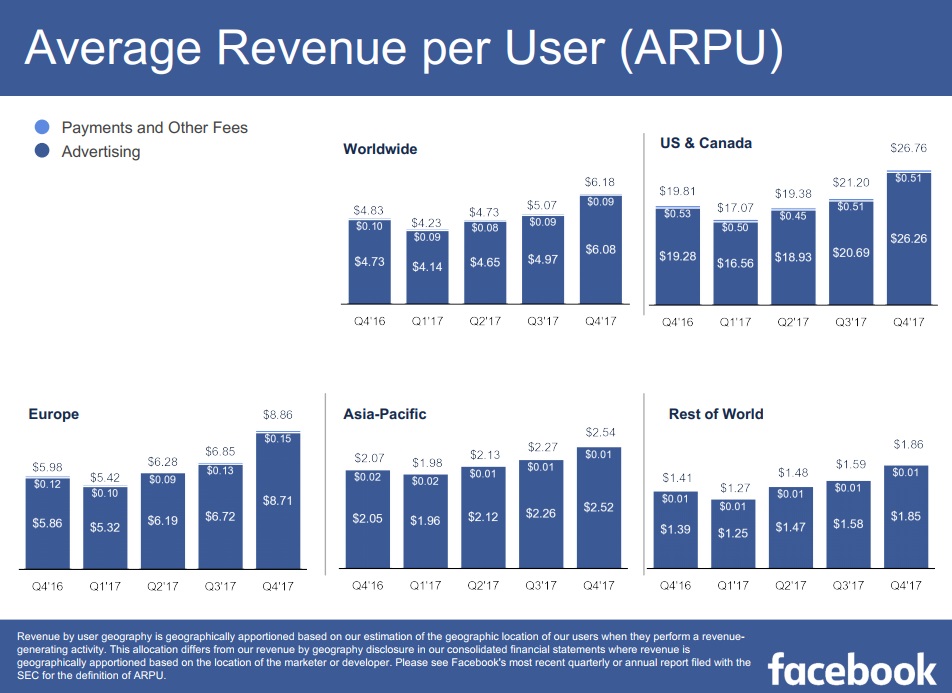 "2017 was a strong year for Facebook, but it was also a hard one," CEO Mark Zuckerberg noted in his accompanying statement. Addressing the ongoing concerns about the platform being used to fuel societal division and political turmoil, Zuckerberg made specific note of their renewed focus on ensuring time spent on Facebook is ‘time well spent’.

"In 2018, we're focused on making sure Facebook isn't just fun to use, but also good for people's well-being and for society. We're doing this by encouraging meaningful connections between people rather than passive consumption of content. Already last quarter, we made changes to show fewer viral videos to make sure people's time is well spent. In total, we made changes that reduced time spent on Facebook by roughly 50 million hours every day. By focusing on meaningful connections, our community and business will be stronger over the long term."

Facebook has already flagged their coming News Feed changes along these lines, within which they also repeatedly noted that such changes may reduce time spent on the platform. But while 50 million hours is a lot, at Facebook’s scale, it’s important to keep that in context.

On the other hand, that's a decline of 2 minutes per daily active user.

So rather than the current 50 minutes spent per user, per day on the platform (as per Facebook’s last update on this stat), it’s down to 48 minutes. Significant, but still, worth putting in perspective.

But with further changes coming in, that could be set to drop again. Facebook has flagged this, and the News Feed changes haven’t yet come into effect. As such, we don’t know what the full impacts will be, or how much of a reduction Facebook can tolerate ‘for the greater good’. It’s hard to imagine the market will respond favorably to any significant decrease in time spent - at least, not without some broader perspective from Facebook on the longer term benefits.

Overall, the numbers reflect Facebook’s current state of play – performance remains strong, but questions over the platform’s impacts continue to loom, and will play a part in the numbers moving forward. Facebook clearly knows what it’s doing – they have more data on audience behavior than any organization in history, and the revenue figures show that they have little to worry about on that front. But the impacts are impossible to measure right now, and won’t be fully understandable until they’re enacted.

As such, The Social Network’s 2018 results could yield some far more interesting trends.