Twitter Will Allow Political Ads Once Again, While Also Relaxing its Rules Around Cause-Based Promotions

Twitter has announced that it will relax its rules around political and cause-based advertising, and allow more types of political-based promotions to run via tweet, which will re-open avenues for campaign promotion that Twitter cut off three years back. 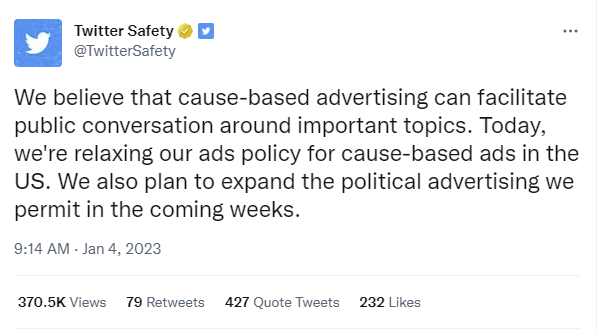 Twitter says that, moving forward, it will look to align its political ad policies with TV regulations, which, in the US, includes provisions around equal share of accessibility for all candidates and the prices charged for political ads.

“Broadcast stations are prohibited from censoring or rejecting political ads that are paid for and sponsored by legally qualified candidates.”

It’s this particular aspect that Twitter has had issues with in the past.

Back in 2019, then Twitter CEO Jack Dorsey made headlines when he announced that Twitter would ban political ads completely.

As Dorsey explained at the time:

“While internet advertising is incredibly powerful, and very effective for commercial advertisers, that power brings significant risks to politics, where it can be used to influence votes to affect the lives of millions.”

Dorsey specifically noted that online political ads, which utilize machine learning-based optimization and micro-targeting, can significantly sway voter opinions in all new ways, and as such, they need to be subject to rigorous fact-checking to avoid the amplification of misleading and untrue claims. Twitter, Dorsey noted, was already working to address these challenges in regular tweets, but applying the same to paid promotion added new conflicts – i.e. Twitter would essentially be financially incentivized to promote such messaging, which was a position that Dorsey preferred not to be in.

So he cut them off, avoiding those conflicts entirely, and restricting one avenue for political outreach.

Twitter 2.0 chief Elon Musk clearly doesn’t see things the same way, which he’s already made clear in his various political tweets and comments, as well as his efforts to uncover corruption and institutional influence on Twitter’s past decisions.

Those investigations, which Musk has labeled ‘The Twitter Files’, haven’t, in large part, contained any significant revelations, but they have shown that political and law enforcement groups have played a part in Twitter’s past decisions around moderation, censorship and more.

Twitter has reported on this in its past transparency reports, but still, the extent to which Twitter had acted in direct response to requests from, say, The White House, or the FBI, has been revealing.

Musk is determined to avoid such in his time at the helm of the app, which is why it makes sense to see him re-open political advertising to all, and deal with the consequences of such as they come about.

But it could, as Dorsey warned, lead to the promotion of misleading and deceptive messaging, designed to dissuade certain user groups from voting, for example, or amplify rumors in order to harm opponents, with half-truths or deliberate misinterpretations of fact.

That’s become a common playbook for certain political entities, and while they can already share such messages on Facebook, which hasn’t gone as far as banning political ads outright (though it has implemented many new restrictions), providing reach for such via Twitter re-adds another element.

And given Musk’s attraction to conspiracy theories, it seems potentially risky. That’s even more so when you also factor in its reduced moderation workforce as a result of Musk’s wide-reaching job cuts, and other cost-reduction measures.

But then again, Twitter will still be beholden to the App Store and Play Store rules around misinformation, so some guardrails will still remain in place.

We’ll see what comes next – Twitter says that it will reveal more details as it revises its political ad policies.