While audio social platform Clubhouse has seen a significant rise of late, as with the sudden ascent of group video streaming app Zoom last year, that rapid acceleration in exposure has lead to increased scrutiny of its processes, and uncovered several major flaws that will need to quickly be addressed in order to reassure users and avoid further complications.

The latest comes as a result of hackers gaining access to Clubhouse audio, and re-recording that data into third-party streams.

"An unidentified user was able to stream Clubhouse audio feeds this weekend from “multiple rooms” into their own third-party website, said Reema Bahnasy, a spokeswoman for Clubhouse. While the company says it’s “permanently banned” that particular user and installed new “safeguards” to prevent a repeat, researchers contend the platform may not be in a position to make such promises."

Clubhouse audio has previously been made available via GitHub using a similar process: 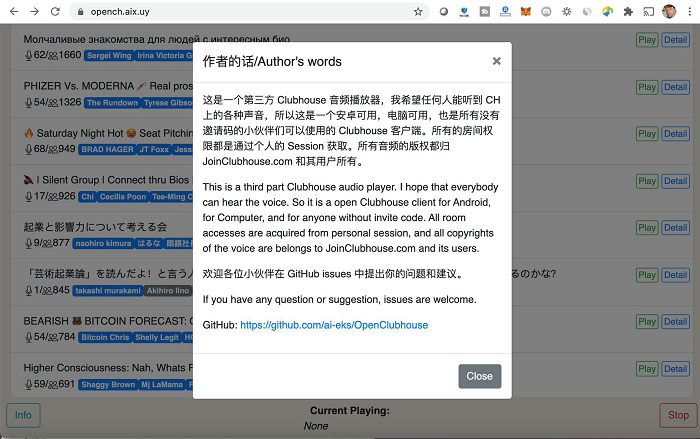 Indeed, various app researchers and web security experts have already sounded the alarm about Clubhouse and the security, and potential exposure, of its systems. Some have also noted the app's connection to China, similar to TikTok, with Clubhouse routing much of its back-end operations through China-based systems. That could leave Clubhouse data exposed to the CCP, if the Chinese government were to take an interest in such. There's no evidence to suggest that this has happened, or ever will, but it's another potential concern, which, like TikTok, could eventually prompt US Government examination.

Clubhouse has also faced various challenges in content moderation, and addressing concerning behavior within the app. Those challenges are exacerbated by the live engagement of the app, which makes it harder to censor and limit discussions that could delve into concerning territory.

As noted by Vice:

"Users are warning that outlandish coronavirus conspiracy theories – everything from false rumors that the vaccine is made from fetal cells to 5G satellites controlling people through social distancing – are spreading fast on the app. Those who call out these false claims can even face harassment and abuse."

Indeed, various users have raised concerns about these and other forms of harassment and abuse, both within and stemming from Clubhouse chats. That puts increased pressure on the app to implement more protection measures before a broader public release.

For its part, Clubhouse has acknowledged that it does have work to do in this respect. In October last year, the app posted an update on its work to address the various concerns around moderation, while last month, it outlined its key areas of focus moving forward, including moderation and improved user safety.

"User safety has always been a top priority for us, and as we welcome more people, it will remain one. This means scaling up our Trust & Safety and Support teams as we grow, continuing to invest in advanced tools to detect and prevent abuse, and increasing the features and training resources available to moderators. We’ll also be aggressively growing our support team so that everyone’s clubs can get same-day approval."

It should be acknowledged, of course, that Clubhouse is still very young, and it's unrealistic to expect it to have all bases covered this early in its process.

But then again, it has various past examples of similar issues and social apps to go on - given the high profile challenges on the same faced by every other major social app, Clubhouse should have a better plan in place to prepare for such concerns ahead of time, which doesn't appear to be the case.

And this, again, is aside from the security concerns and connection to Chinese-based support systems. Right now, Clubhouse is still in invite-only mode, which, at least in part, is designed to give the platform more room to address such before launching to everybody, and compounding these concerns. But there are some significant issues here - and if Clubhouse can't scale quickly, high profile users will quickly turn to alternative tools, like Twitter Spaces, where they can use their already established social graph to reach more people with their audio chats, without the same issues.

These are the biggest challenge Clubhouse now faces as it looks to the next stage. In this sense, its invite-only approach is a wiser way to go - but can it resolve all of these concerns in time in order to maximize its growth momentum?

Some key elements to watch in the app's ongoing development.