If you hadn't heard of Zoom before March 2020, no doubt you have by now.

The multi-participant video meeting app has seen a massive surge in usage amid the COVID-19 lockdowns, with everyone from teachers to celebrities using the platform to connect with their respective audiences, and maintain some level of social engagement. 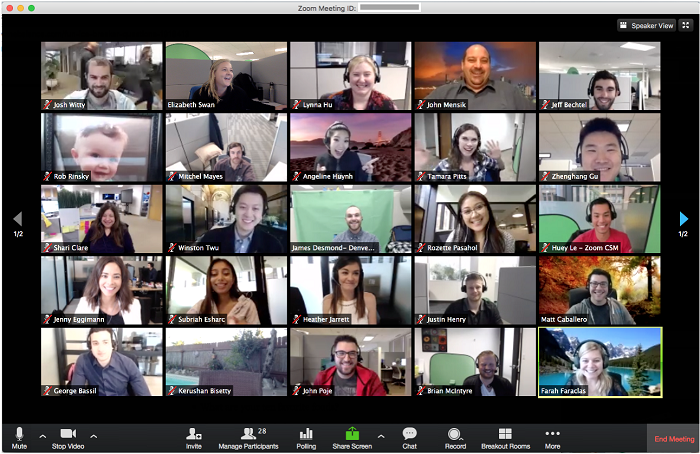 Zoom was founded back in 2011, but its primary use case is enterprise video, so it hasn't made a big push into direct consumer marketing and promotion. But the simple functionality has made it a hit with those looking for some face-to-face meeting time - and with anybody able to go live for up to 40 minutes, with up to 100 participants, it's proven to be a great solution to address a sudden need in the market.

That's seen demand for app explode. According to the latest report from App Annie, Zoom was the most downloaded iOS business app in 141 markets in March, while Zoom says that it's gone from 10 million DAU in December, to 200 million MAU right now.

The rising demand has forced the company to re-focus on its use-case - but it's also exposed some flaws in Zoom's systems, which has even lead to the FBI warning users about potential risks and exposure to outside elements within Zoom meetings.

Acknowledging these flaws, Zoom has this week vowed to commit all of its effort to improving its systems, and protecting user security, while also working to cater to the massive increases in meetings.

"These new use cases have helped us uncover unforeseen issues with our platform. Dedicated journalists and security researchers have also helped to identify pre-existing ones. We appreciate the scrutiny and questions we have been getting – about how the service works, about our infrastructure and capacity, and about our privacy and security policies. These are the questions that will make Zoom better, both as a company and for all its users."

Among the various issues, Zoom has removed the Facebook SDK from its iOS app, due to concerns that users were unwittingly sharing information with Facebook, while it's also removed an integration with LinkedIn's Sales Navigator, which shared LinkedIn profile information on Zoom participants within the app.

And this is just the beginning of its efforts - as per Zoom:

"Over the next 90 days, we are committed to dedicating the resources needed to better identify, address, and fix issues proactively. We are also committed to being transparent throughout this process."

Is Zoom trustworthy? Is the app scraping and re-sharing user data? The evidence would suggest that it's not acting maliciously in this respect, and that Zoom is working to remove any data-sharing elements which could see users providing personal information without their expressed knowledge.

Of course, the other issue is 'Zoom-bombing', in which uninvited guests crash your Zoom meeting, often sharing offensive content in the process.

Zoom says that it's working to address this also:

"On March 20th, we published a blog post to help users address incidents of harassment (or so-called “Zoombombing”) on our platform by clarifying the protective features that can help prevent this, such as waiting rooms, passwords, muting controls, and limiting screen sharing."

It has some way to go, but it's good to see Zoom taking responsibility for its flaws, and seeking to address them in a transparent way. The COVID-19 lockdowns could be a key turning point for Zoom, and could make it a key resource for many more people moving forward - though much of that growth has come about unexpectedly, with Zoom being largely unprepared for the sudden influx.

As such, the noted issues are not unsurprising, and by addressing them, Zoom could become a much bigger consideration for many more use cases in future.