Facebook continues to take out potential competitors, with The Social Network acquiring rising social app tbh in a deal said to be worth less than $100 million. 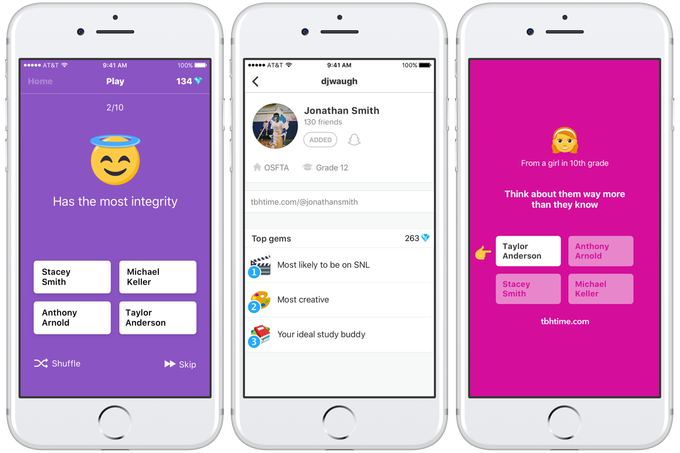 tbh, which has proven particularly popular amongst high school students, is a simple social app which enables users to answer multiple choice questions about their friends – you can see this in the first and last screenshots above. The app’s focused on positivity, so the questions are light-hearted and geared around encouragement.

Once you’ve answered, the people who you pick are awarded ‘gems’ based on your responses. Poll participants are anonymous, but you can chose to reveal your answer if a user replies to a gem.

Pitching itself as ‘the only anonymous app with positive vibes’, tbh has been downloaded five million times since it launched in August, and now has four million daily active users, with over a billion poll answers provided. That was enough to pique Facebook’s interest, and they’ve moved quickly to take ownership. TechCrunch reports that tbh will remain in operation as a separate entity, much as WhatsApp and Instagram have, for the immediate future.

The move once again underlines Facebook’s dominance in social, with the size, scale and resources to take out competitors before they have a chance to become a significant challenger. But more interesting in this case is the speed at which Facebook’s moved on the app – Facebook acquired Instagram after it had been in operation for around 18 months, while they made an offer to Snapchat after that app had been active for around two years.

As noted, tbh has only been active for a matter of months, which shows that Facebook is developing better systems to evaluate potential threats, in order to move on them before they become they’re able to more significant alternatives.

Is that a good thing? It’s hard to say. Definitely, it seems that Facebook will remain in a strong enough position to quell any potential challengers - if there can even be an actual challenger for Facebook at this stage. But it may also mean we see less innovation in the social sphere as developers and investors become more weary of being blown out of the water by Zuck and Co.

And worth noting here, Facebook also recently released an app (in limited capacity) which clones the features of Houseparty, another social rival which has been gaining traction amongst teens, which has raised some $73 million in funding thus far.

Given the basic process of tbh, it’s hard to see it becoming as big a platform as, say, Instagram, but it gives Facebook yet another opportunity to gather data and maintain a hold on that critical younger demographic. And given their own app aimed at this market (Lifestage) was recently shuttered, maybe Facebook will stop looking internally for solutions on this front, and simply work harder to detect and contain threats before they have a chance to grow.