Facebook Adds New Option to Slow Down Comments Within Groups

This is interesting - Facebook has added a new option within groups which enables group admins to slow down comments on a specific group post, which could help to ease tension and angst amid increasingly heated debates. 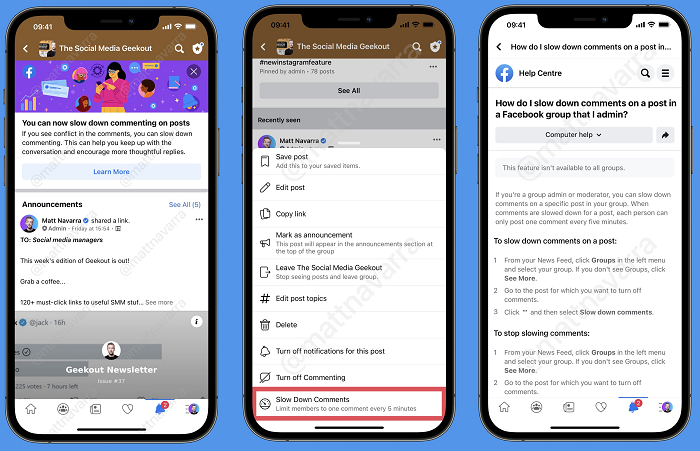 As you can see in these screenshots, posted by social media expert Matt Navarra, the new 'Slow Down Comments' option is listed in the post options menu for group admins.

"If you're a group admin or moderator, you can slow down comments on a specific post in your group. When comments are slowed down for a post, each person can only post one comment every five minutes."

That could be a great circuit breaker in tense or argumentative debates, giving people a moment to take a breath and think about what they're posting, rather than reacting in the heat of the moment. Emotional response is key to prompting that back and forth on posts, and what Facebook's own News Feed is notorious for feeding - but by adding a simple element of friction, like a five-minute delay, that could be all that's required to scale things back and keep conversations civil.

Twitter has experimented with several similar options, like removing the option to straight retweet in the lead-up to the US Presidential election last year. Users could still retweet things if they wanted, but the system would default to a quote tweet instead, which would ideally prompt more people to think about what they're sharing (and why), before they did so.

Twitter has also added alert prompts on re-shares of potentially false information, and on sharing tweets with links when they haven't opened the content.

These are only small measures within the regular engagement process, but again, sometimes that's all that's needed to get users to think more rationally, as opposed to simply firing back in the replies.

As such, this could be a low-key, significant addition for Facebook groups. It won't solve all of the various issues with Facebook group engagement, but it's another control option for group admins, which may end up easing conflicts.