You may have noticed over the last few days that Facebook has rolled out a change to its lower navigation bar, in order to better align the displayed icons with the on-platform functions which you actually use.

TechCrunch has confirmed that this update also includes a new capacity to more easily change your listed icons, and get rid of those sometimes annoying red dot notifications on each. 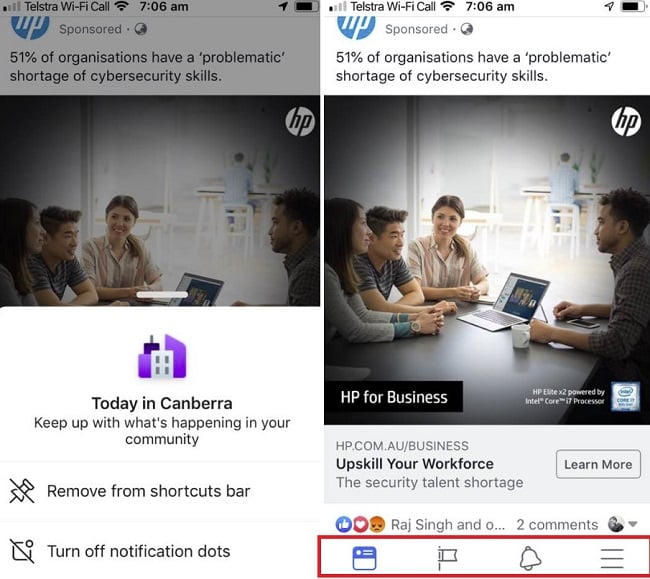 In order to remove a tab in this new process, you tap and hold on whichever one you want to action. That will bring up the option to either remove it or turn off the notification dots. You can't remove the News Feed or Notifications tabs, nor the hamburger menu, giving you a couple of tabs to play with as you wish.

Facebook's been working on better personalizing the lower navigation bar since August last year, so you may have noticed it change a few times (as I have). But aside from personal preferences, Facebook has also traditionally used the lower navigation bar to promote its latest options - like Facebook Watch or Marketplace. Now it seems that Facebook's going to give more control back to users on this front, which could help it encourage more activity.

But what I found particularly interesting in this new update - and as you can see in the image above - is that you can delete tabs from your lower navigation bar and not replace them with anything.

As shown in the second screenshot (right), when I removed the 'Marketplace' tab, I was left with just three tabs remaining. I could also remove the Pages tab, leaving me with just two. That's interesting because, as noted, that lower tab is a prime area to promote on-platform activity, and it's somewhat surprising to see Facebook give you the option to essentially remove quick links that can promote more engagement. This may be a bug, but it looks like a feature, and may be something to experiment with.

It's also worth noting that you can control the red notification dots on any tab in your Facebook settings: 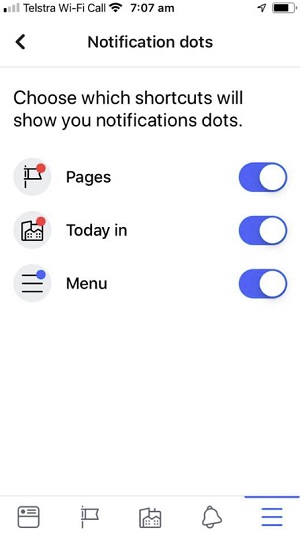 While you can also add and remove your lower bar shortcuts via your setting tools. 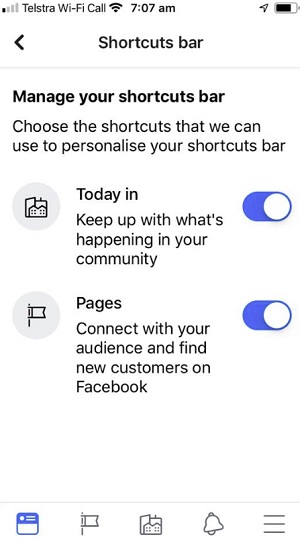 Giving users more control over their shortcuts and notifications seems like a good move, and it'll be interesting to see if the added personalization actually gets people tapping across to other areas within the app (I checked in on the local news section for the first time in a long time once it appeared on my lower bar).

It'll also be interesting to see if Facebook chooses to add its coming News tab to the lower bar for all users, or if these new customization tools are the new norm.

Either way, some new options to consider to manage your Facebook experience.