After seeing positive results with the initial roll-out of its dedicated News tab in the US last year, then expanding the option to the UK in January, Facebook has now announced the next stage for Facebook News, with the additional tab to launch in Germany this May. 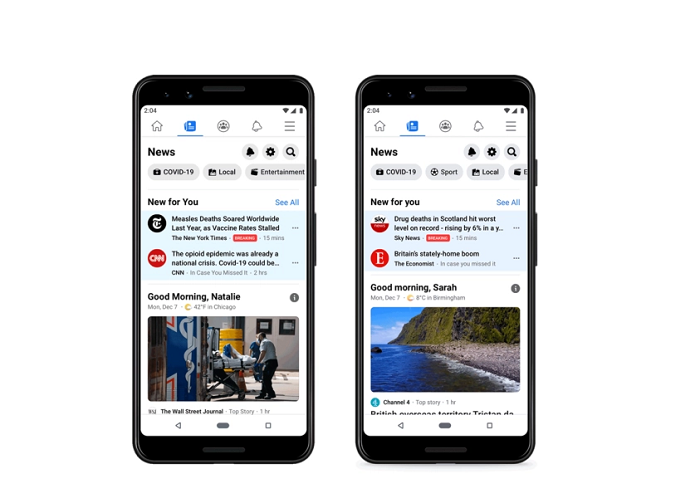 "Today we announced early partnerships with publishers that represent more than 100 editorial brands in Germany."

The dedicated tab provides a means for Facebook to showcase a curated set of news reports, which, ideally, will lessen the distribution of misinformation on the platform, while it could also give Facebook more opportunity to reduce the amount of political news in the main News Feed, which it recently noted that it will be exploring.

The expansion of its News tab could see Facebook look to establish more of a divide between family and friends and news content into each feed - though how, exactly, Facebook will look to facilitate such is not clear at this stage.

News content on Facebook came into sharp focus last month when Facebook cut off local publishers in Australia due to disagreement over the Australian Government's proposed Media Bargaining Code, which would have forced the company to share revenue with publishers for use of their content. Facebook argued that it doesn't use this content, as such, as anything shared on its platform is posted by users, or by the publishers themselves.

At the same time, Facebook has sought to establish financial agreements with publishers, with a view to avoiding further regulatory action, while also enabling Facebook to explore new ways to showcase news content in a more collaborative, engaging way.

Facebook News is its key solution on this front, and Facebook has been keen to point out the benefits for publishers in signing up to the option.

"Built with publisher feedback and insights from people, it is a personalized destination for news within Facebook. Helping publishers reach new audiences has been one of our most important goals, and we’ve found over 95% of the traffic Facebook News delivers to publishers is incremental to the traffic they already get from News Feed."

Traditional publishers still hold a lot of sway with local authorities, and Facebook is keen to establish better relationships with local media in order to avoid situations like the Australian stand-off, which ultimately impact on the usage of its platforms. Indeed, Facebook's digital advertising dominance will continue to bring scrutiny, and regulatory queries. If Facebook can reduce such, by establishing independent agreements like these, it makes sense to do so - while as noted, it also gives The Social Network more flexibility in regards to the presentation of news content on its platforms.

That connectivity can also increase reliance on its tools among traditional media players, further solidifying Facebook's place as a key source of news and information.

Expect France and Australia to be the next two regions to roll out Facebook News, as it looks to continue to lock in independent news deals, and avoid further Imperial entanglements.