Amid the uncertain impacts of COVID-19, Facebook has published its latest earnings report, showing double-digit increases users and revenue – though it has warned of a more significant slowdown on the horizon. 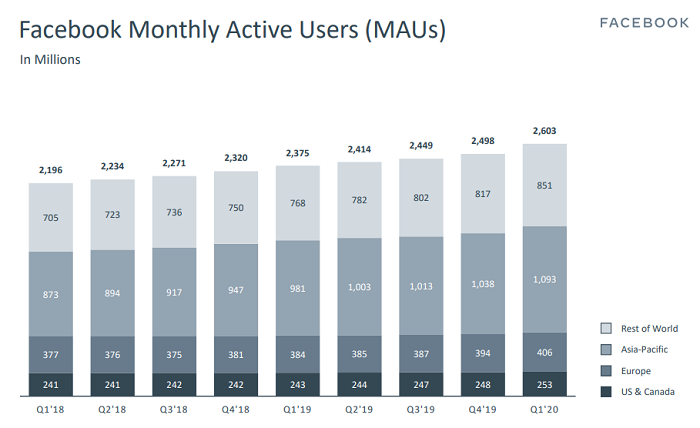 Daily actives jumped 77 million in the quarter, the biggest increase since 2011, which come largely as a result of increased usage amid the COVID-19 lockdowns. 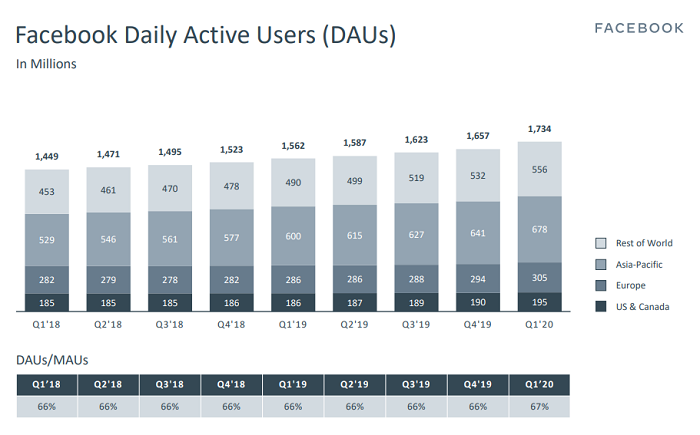 And while those results are impressive, Facebook has sought to temper expectation around such moving forward:

“Our community metrics, including Facebook DAUs and MAUs and Family MAP and DAP, reflect increased engagement as people around the world sheltered in place and used our products to connect with the people and organizations they care about. We expect that we will lose at least some of this increased engagement when various shelter-in-place restrictions are relaxed in the future.”

As with all businesses, it’s difficult to compare activity in the current period to normal times, as we are currently not living in a normal situation. But the numbers do show that Facebook remains a key resource for many users, and has once again been a key connective platform amid the pandemic.

In terms of region-specific trends, the Asia-Pacific market remains the biggest driver of growth for Facebook, with India, in particular seeing significant take-up as the developing nation undergoes its own digital shift. Facebook recently made a key step towards maximizing its opportunities in the region by purchasing a stake in Indian mobile provider Jio – which is noted in its accompanying statements around capex.

Across all of its apps – Facebook, Messenger, WhatsApp and Instagram – Facebook has also shared that it’s now close to reaching its next major milestone – 3 billion total users. 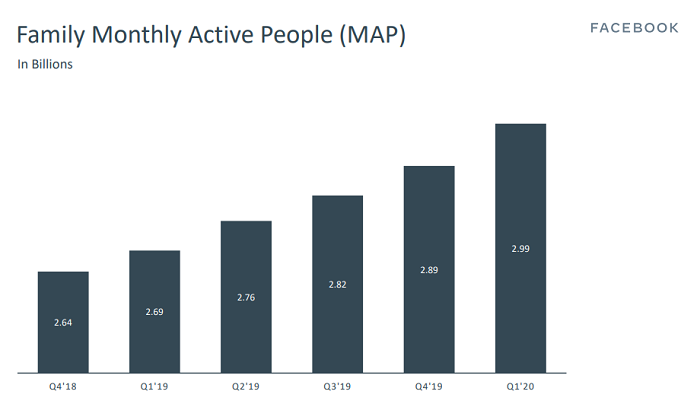 The true scope of that is hard to fathom – the population of the entire world is 7.8 billion, and when you also take into account that Facebook is banned in China (1.4b) and several other nations, and that only around half of the world is able to access the internet at all, Facebook’s active reach, via its various apps, is almost absolute in practical terms.

The vast majority of people who can access Facebook’s apps, use them, simple as that.

And while Zuck and Co have dealt with various PR disasters, privacy missteps, and other concerns that have lead some commentators to talk down the Facebook empire, the data is clear. Facebook’s reach is virtually unmatched, and its data resources are huge – and continue to grow every day. 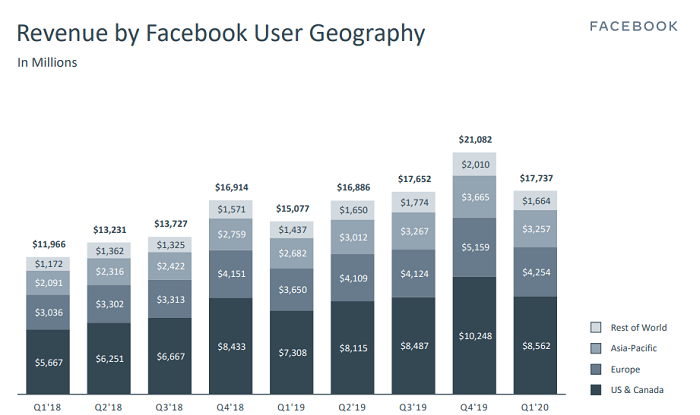 But the company has warned of slowing ad growth as a result of COVID-19:

“We experienced a significant reduction in the demand for advertising, as well as a related decline in the pricing of our ads, over the last three weeks of the first quarter of 2020.”

Various reports have already pointed to a slowdown in Facebook’s ad business, which is largely reliant on advertiser volume, getting a lot of businesses to use its ad tools, as opposed to building on the back of fewer large providers. With many SMBs shut down due to the coronavirus mitigation effort, a downturn is expected, and Facebook is getting in early, flagging potential impacts in future reports.

Facebook does note that it’s seen renewed signs of stability in its ad business over the first three weeks of April, but that would mean that it’s looking to post a flat result, as opposed to growth. That’s probably all that can be expected right now, but Facebook’s looking to manage market expectations now, ahead of those impacts.

Also, here’s an interesting new chart that Facebook has provided: 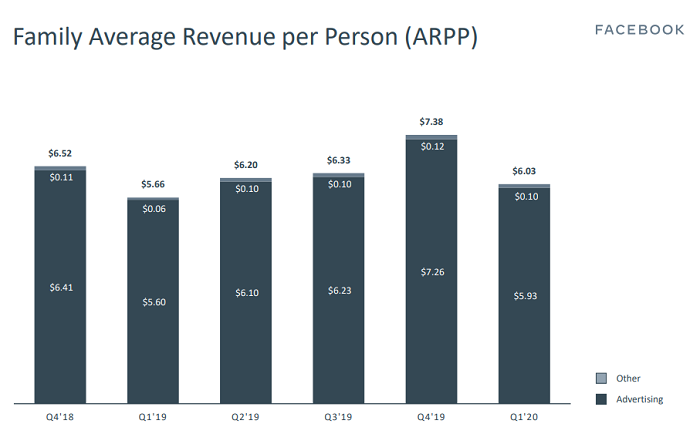 The company has reported average revenue per person across its entire family of apps, reflecting a slight year-on-year increase. Facebook will hard-pressed to boost that figure in the coming months, but it could be an interesting data point to note in future. It’s ARPP across its family of apps is also slightly lower than the average on Facebook alone ($6.95), which likely reflects that Instagram ARPP still has a way to go.

As noted, Facebook has also seen some significant outgoings of late, which will impact its overall position in Q2.

“Following the end of the quarter, we entered into an agreement to invest in Jio Platforms Limited, a subsidiary of Reliance Industries Limited, for approximately $5.7 billion, and we paid the $5.0 billion settlement amount due under our modified consent order with the FTC, which took effect in April 2020.”

Facebook finally received Federal Court approval of its agreement with the FTC over the Cambridge Analytica scandal last week, which will see it pay a $5 billion fine. The combined impact of this and its investment in Jio will reduce its margins in Q2, and with the expected reduction in advertiser spend, things may not look as good when Facebook next fronts analysts.

Still, these are expected, and Facebook has flagged such well in advance. Neither is likely to have a long term negative impact on the company’s standing (in fact, the opposite in the case of Jio).

Facebook also notes that it’s increased its headcount by 28% year-over-year to 49, 268, largely driven by increases in security and moderation – but at the same time, it’s expecting to see a reduction in operational expense in the immediate future due to reductions in travel, events, and marketing. Facebook is, however, looking to continue to invest in product development and recruiting technical talent moving forward. In addition to this, Facebook has also committed more than $300 million to COVID-19 relief efforts.

Overall, it’s another good report from Facebook, and the market has responded in kind, with signs pointing to ongoing growth, despite the expected downturn. The fact that Facebook says its ad businesses is already stabilizing is another key point of confidence, and as it also looks to ramp up its efforts in India, its dominance looks only set to increase.