Facebook has posted its latest performance update, showing yet another increase in overall active users - though a slight decline in the US - along with a solid boost in revenue.

If the July Facebook ad boycott, in protest over its lack of action around hate speech, had any major financial impact for the company, it's not evident here.

First off, on users - in Q3 2020, Facebook saw 1.82 billion daily active users, an increase of 35 million users on the previous period. 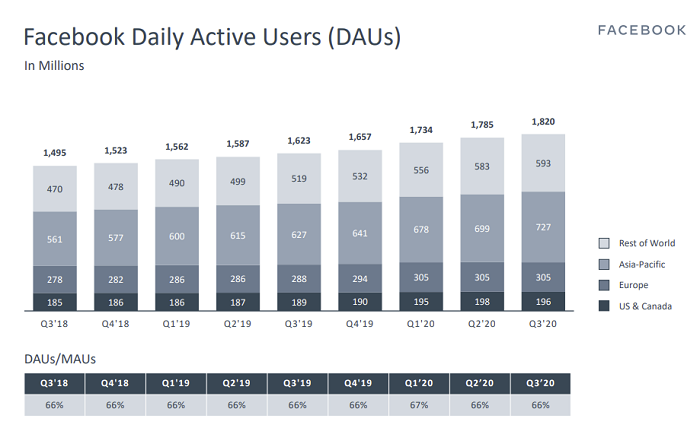 That represents a 12% increase YoY, but as you can see, Facebook did see a slight decline in usage in the US for the quarter.

That's likely not a major concern, but any reduction is always worth noting.

Facebook once again saw its most significant user growth in the Asia Pacific market, with India, in particular, continuing to see more take-up. Earlier this year, Facebook took a significant step towards maximizing its opportunities in the Indian market by purchasing a stake in Indian mobile provider Jio, through which it will look to build an eCommerce platform within the Indian market, which could, eventually, make Facebook the key platform for the nation's billion-plus of citizens. 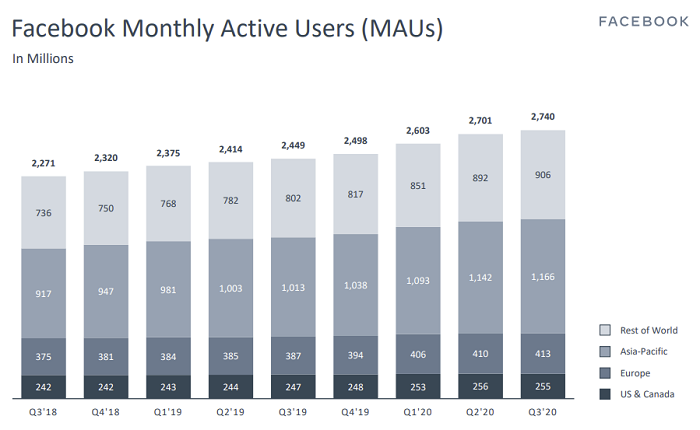 But as with the US and Canada slow down, Facebook's rate of growth dipped in the quarter, which likely reflects the changing habits of users amid the lockdowns - which is largely unpredictable and will skew that data for many businesses. 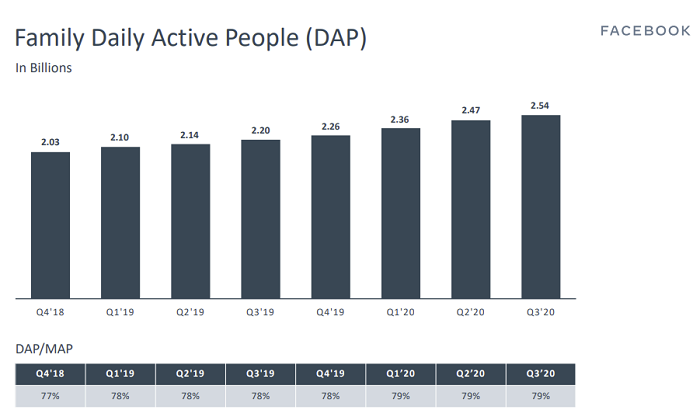 That means that Facebook sees an additional 72 million users across its other apps who don't also use Facebook every day. Ideally, we would get a specific breakdown of Instagram and WhatsApp usage, separate from these listings, but Facebook only discloses overall numbers for its group of apps.

Per month, Facebook sees 3.21 billion users across its apps.

Facebook also provided this chart, which it hasn't posted in previous reports: 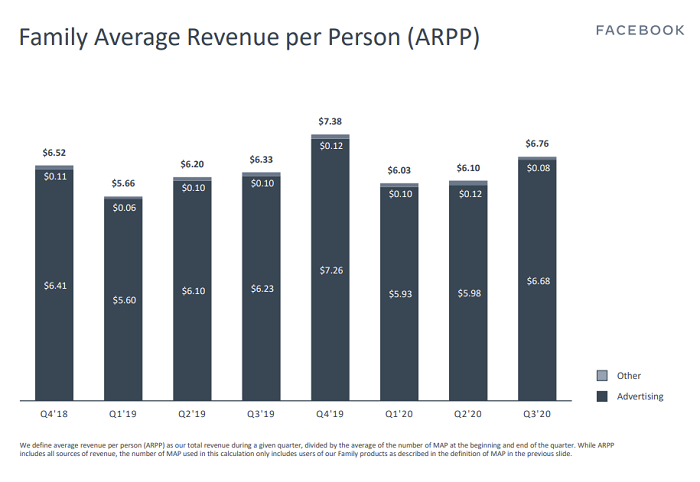 Which is interesting, because Facebook has also shared its average revenue per user stats for Facebook in isolation: 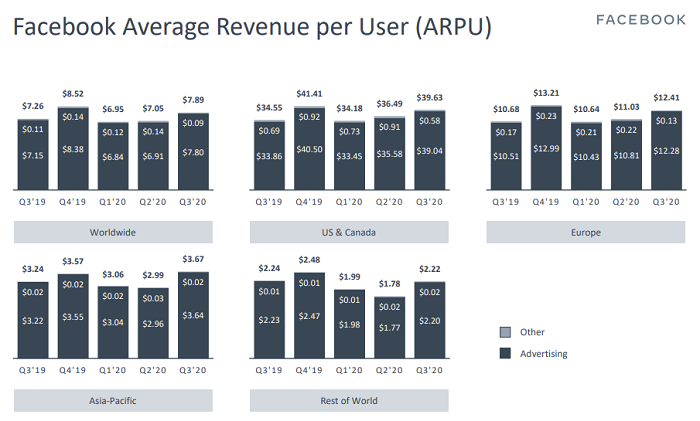 Given its issues in monetizing WhatsApp, and limitations on Messenger, you can assume that the vast majority of that intake has come from Instagram, which provides some perspective as to how much revenue the platform is now making on its own. Not bad for an app purchased by Facebook for $1 billion back in 2012.

Note too that Facebook's ARPU rose in all regions in the quarter, another positive sign for the company.

On revenue overall, Facebook posted another solid result, bringing in $21.47 billion for the quarter. 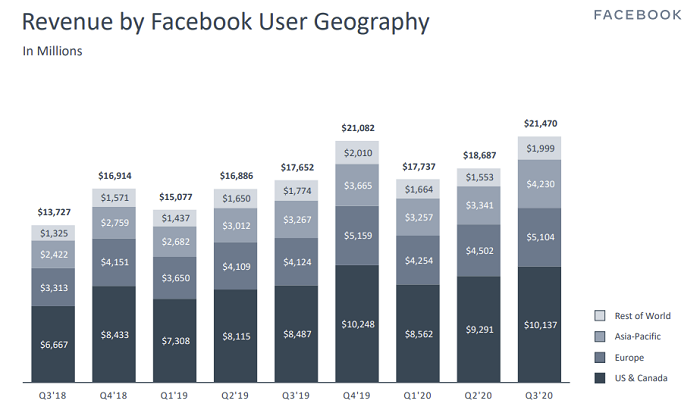 It's difficult to even fathom these numbers, really, the amount that Facebook is both used, and how much revenue it generates. Presented in these charts, it all seems quite normal, and largely in line with expectation (though the revenue result beat analyst estimates), but when you actually consider how much money, and how many people those bars represent, it's amazing to consider the breadth of Zuckerberg's empire.

And it only looks to be getting bigger - as noted by Facebook:

"We expect our fourth quarter 2020 year-over-year ad revenue growth rate to be higher than our reported third quarter 2020 rate, driven by continued strong advertiser demand during the holiday season. Additionally, Oculus Quest 2 orders have been strong which should benefit Other Revenue."

VR has taken a leap in 2020, as people have sought out alternate forms of entertainment to replace social events. That's accelerated the development of Facebook's Oculus offerings, which is another area that the company could dominate.

It's still a way off being a common, household option, but with more people looking to work from home, and seeking new forms of entertainment, VR could serve various purposes, and become a major element of the company's future growth.

Facebook has, however, warned of potential impacts on its ad business, both from Apple's changes to tracking as part of iOS 14 and the evolving discussions around data sovereignty to avoid misuse.

"There is also continuing uncertainty around the viability of transatlantic data transfers in light of recent European regulatory developments, and like other companies in our industry, we are closely monitoring the potential impact on our European operations as these developments progress."

The impacts of each could be significant, but they're also largely uncertain. Back in August, Facebook said that Apple's changes to IDFA could essentially render its Audience Network useless on iOS, while it will also have a level of impact on its other ad products.

We'll have to wait and see how that plays out, but even if it does take some hit, Facebook's revenue performance still looks solid moving forward.

It's another massive update for Facebook, in the midst of a pandemic, which reflects the company's market position, and capability to weather the changing environment. It seems that whatever Facebook has lost in smaller advertisers, it's been able to make up for with higher ad spend from others, while as noted, policy criticisms and boycotts, as a result of its decisions, have seemingly had little impact.

I mean, that wasn't the true goal of the July #StopHateforProfit campaign, it was about sending a message in order to raise awareness.

But it does raise the question - how do you make Facebook pay attention when even a high profile boycott like that has seen such minimal impact?