Facebook CEO Mark Zuckerberg is not happy with Apple, and he's not afraid to call them out by name in airing his grievances.

As you can see here, Zuckerberg has today announced that its creator revenue tools, including paid online events, fan subscriptions and badges, will remain free for creators to use up until 2023.

Facebook announced that these tools would be free on launch last year, with the understanding that this was a measure put in place to help those impacted by the pandemic, and that Facebook would, eventually, look to take a cut of these paid tools as part of its future revenue strategy.

Which is still the case, but given the ongoing impacts of the pandemic, Facebook's keeping them free for now, while Zuck has also directly called out Apple's 30% fee for in-app subscriptions on iOS, noting that Facebook won't be so greedy in its eventual revenue share strategy.

Tensions have been simmering between the tech giants since last June, when Apple announced its coming IDFA update, which would alert all app users to the data that each app tracks on them, via prominent pop-ups on screen. The prompts then give users the capacity to block data tracking, limiting the insight available for digital advertisers.

Which is a potentially significant headache for Facebook, which not only tracks a lot of user data within its apps, but also doesn't have the best reputation for how it uses and protects such info, given the Cambridge Analytica scandal and other similar incidents.

That will likely see a lot of users cutting Facebook's data access off in particular, and because of this, Facebook has launched various public attacks on Apple's new process, even calling on users to oppose the update as it will hurt small businesses.

As Zuckerberg explained back in January, during a Facebook earnings call:

“Apple has every incentive to use their dominant platform position to interfere with how our apps and other apps work, which they regularly do to preference their own, Apple may say that they're doing this to help people, but the moves clearly track their competitive interests."

Apple, of course, says that its new privacy options are merely moving in line with rising public expectation around such, and giving people more control over how their data is used. Which may well be true, but both explanations also fit, in some ways, and Facebook isn't the only company that's voiced strong opposition to Apple's high App Store fees.

Indeed, Epic Games, the maker of the popular FPS game Fortnite, is currently in the midst of a court challenge against Apple over the 30% fee that Apple applies to in-app purchases. Epic's argument is that Apple has no stake in such purchases once the app has been downloaded, with The App Store no longer playing a role in the transaction. If that the 30% fee were removed, Epic has argued that it would be able to better serve its audience with lower charges, facilitating business growth and expansion, which it claims is being limited by Apple's policies.

The eventual outcome could see Apple reducing its stake, but the chances of Apple dropping it in any significant way, or eliminating such entirely, appear slim. But with the bigger platforms continuing to make noise, particularly in the case of tools designed to help creators make money, and deal with the impacts of the pandemic, maybe the added pressure will eventually weigh on Apple, or at the least, prompt further scrutiny from regulators.

Apple did grant a temporary waiver of its 30% fee on funds raised through Facebook's paid events last Setpember, so there has been some small signs of flexibility in the company's generally hardline approach.

But it's still standing firm for the most part, and doesn't appear to be softening its stance as yet.

In addition to Facebook's decision to delay taking any cut of its new paid options for the next two years, Zuckerberg also announced a new payout interface, which will show creators how different companies' fees and taxes are impacting their earnings. 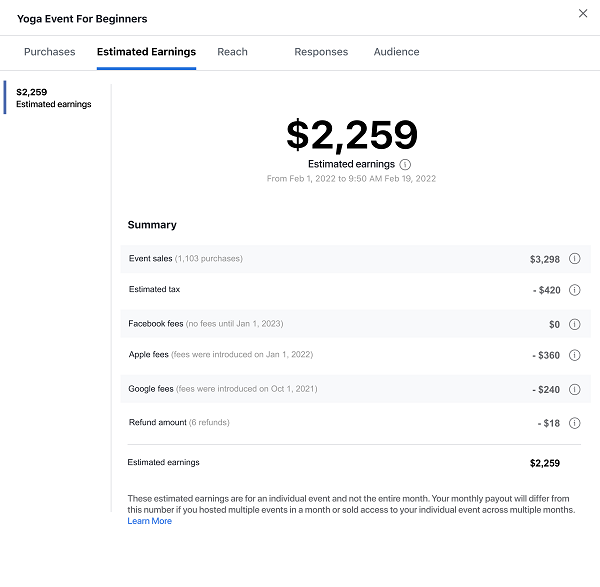 As you can see, the new listing will clearly display where every cent of your revenue goes from your Facebook events and subscriptions - which, aside from adding transparency, also seems like a way to re-direct even more anger towards Apple and Google for the cut that they take.

That, Facebook would be hoping, will help to add more pressure on the company to re-think its approach, but given the history, I wouldn't be expecting Apple to bend so easy.

Maybe, it'll just look for more ways to hit Facebook back instead, and the sparring match will continue - or maybe, eventually, it will see a significantly reduced share going to the tech giants, and more money getting into creators' pockets instead.

I mean, you can hope for the latter, but the former, right now, seems, more likely.