While the format does seem to have lost some of its luster after the sudden rise of Clubhouse earlier in the year, audio social still presents new engagement opportunities, and alternative ways for people to connect, which can expand your interactive options, while also giving the platforms themselves another way to keep users coming back.

And today, Facebook has announced an expansion of its audio social plans, with live audio rooms being made available to public figures globally, and a new, dedicated space within the Watch tab to help users connect to all of the platform’s various audio options.

First off, on the expansion of live audio rooms – back in April, Facebook launched the first stage of its audio social push, in response to rising interest in Clubhouse, which included the addition of audio rooms for public figures in the US. Now, Facebook is expanding the availability of the option.

“From today, all verified public figures and creators will have the ability to host Live Audio Rooms. We’ve seen it become a great tool for lightweight connection and conversion among various types of communities.” 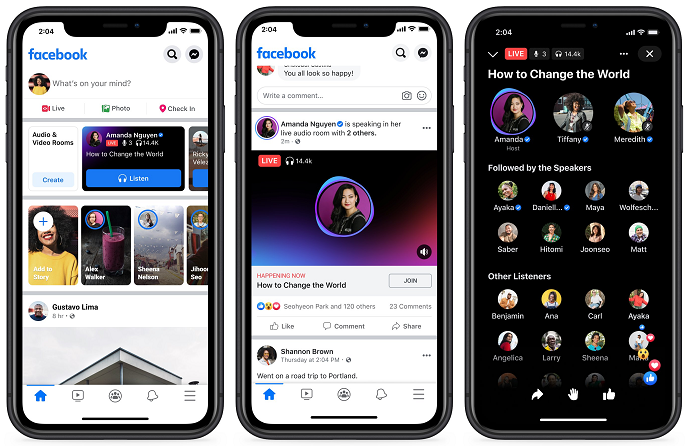 As you can see here, Facebook’s Live Audio Rooms will be displayed at the top of the News Feed for those following each creator (even above Stories), while they’ll also be accessible via a feed post.

The playback format is very Clubhouse-esque, showing the speakers and listeners in separate sections, while Reactions icons will float up the screen as they’re applied, similar to video live-streams.

The new expansion will mean that many more people will now be able to tune in to Facebook audio broadcasts, though creation will remain restricted to only public figures and those with verified accounts at this stage.

Which could actually be a better approach. Part of the problem that Clubhouse is now experiencing, since opening up to all users, is that highlighting the best content to each individual user is difficult, as more and more broadcasts flow into its system all the time (Clubhouse is now up to 700k daily rooms). Many users have noted that the app has become increasingly crowded, and if people can’t find the best rooms for them to tune into at any given time, they’ll likely stop trying, and eventually, stop opening the app.

Twitter is also contending with the same, adding topic tags to Spaces as a means to improve discoverability, and to highlight the best rooms to each user, based on their interests.

By keeping it confined to high profile creators, Facebook can help to ensure optimal take-up of the option, while it may also serve as an educational process of sorts, in showing all users how to use the format, ideally helping to improve the overall quality of its audio content.

On that front, Facebook’s also looking to improve audio discovery, with the addition of a new, dedicated audio section within the Facebook Watch tab, which will highlight Spaces, podcasts, audio creators and more.

As you can see here, the new section will showcase all of Facebook’s audio tools, including its recently added podcast listening options. The fact that it’s buried within Facebook Watch is probably not going to lead to optimal take-up (also, you can’t ‘watch’ audio), but for those who are looking for audio content at any given time, there’ll now be a dedicated space for audio discovery, in various forms, which could also help top improve exposure for audio creators.

Facebook will also now enable all groups to host live audio rooms, another way to boost interest in the option in a more confined, specific contextual environment. 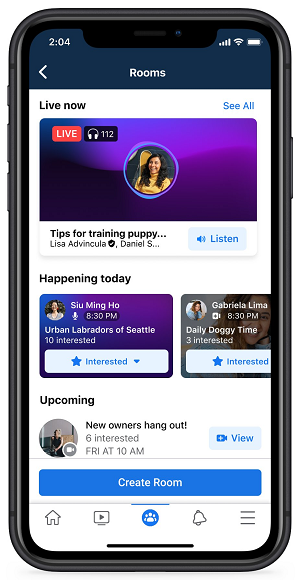 The process will also help to improve discovery, by providing users with a way to find audio rooms within the groups tab, so they can tune in to all their group audio options.

Again, by keeping the option limited to popular figures, and within groups, Facebook can help to alleviate discovery challenges, because the audio content users will be shown will come from celebrities that they follow, or groups they’re members of.

That added context could play an important role in maximizing interest in the option, and making Facebook’s audio tools a more appealing prospect.

Facebook’s also testing live audio rooms on Android and desktop, while it also continues to test its ‘Soundbites’ audio clips options, which will enable users to share edited snippets of audio as a feed post, and in other areas. 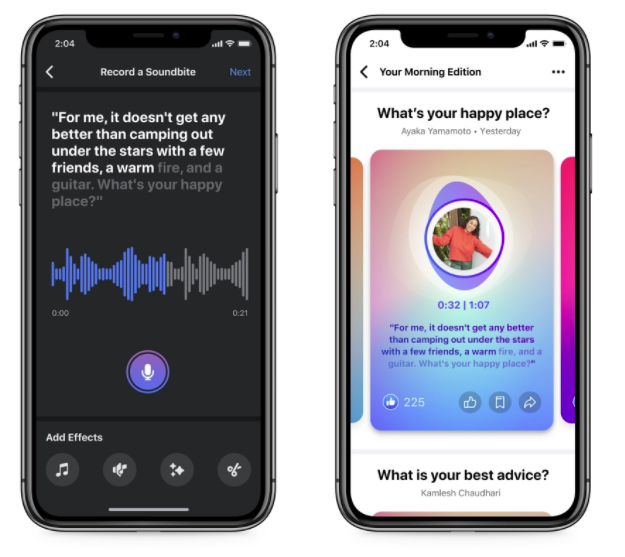 Which is similar to Clubhouse’s recently launched Clips option, though Soundbites will also provide audio filters and editing options to add another element to the process. Facebook’s planning to launch Soundbites to more users in the US within the coming weeks.

It’s hard to say whether audio social will remain a popular element, or whether it was a pandemic-induced fad that provided a novel way to engage as people sought to stay in touch. It does seem to have specific appeal – and as noted, while Clubhouse has lost some momentum, it is now hosting 700k rooms every day.

There’s clearly interest in the format, and as Twitter looks to evolve its own tools, it makes sense for Facebook to also push ahead with its plans, even in a more restricted format that limits access to specific users.

Which, as noted, may actually end up being a better way to go. We’ll see how it shakes out, as the development of audio social continues.