This week, Facebook is hosting its annual F8 conference in which the company showcases its coming additions, updates and more. There are too many announcements to include in a single post, so we're breaking each down by topic. In this post, we'll look at the features announced for Facebook's main app, including new changes for groups, an app redesign and Facebook Dating.

First off, Facebook's getting a makeover, with a new look that may be an attempt to shift away from the traditional Facebook blue that, maybe, people now associate with, you know, privacy scandals and data theft.

As you can see here, the new desktop version is mostly white, with a tab-like format that's more aligned with the layout of the mobile app.

Each element will get its own dedicated focus, as you can see from the Groups tab above, making it easier to navigate through the various elements.

On mobile, the Facebook blue is also being scaled back considerably.

The new color scheme was actually spotted in testing some time ago, so it's not a huge surprise - but Facebook does note that it's not just the aesthetics which are getting an update.

"This redesign makes it easy for people to go from public spaces to more private ones, like Groups. There are tens of millions of active groups on Facebook, and when people find the right one, it often becomes the most meaningful part of how they use Facebook. That’s why we’re introducing new tools that will make it easier for you to discover and engage with groups of people who share your interests."

Among the changes on this front, Facebook says that the new Groups tab will now show a personalized feed of activity across all the groups you're a member of, while also recommending more, similar groups related to your interests. Facebook says that more Groups content will also start appearing in News Feeds (likely indicating an algorithm tweak), while it's also adding an opt-in 'Meet New Friends' feature which aims to help people start friendships with members of their shared communities - "like a school, workplace or city". 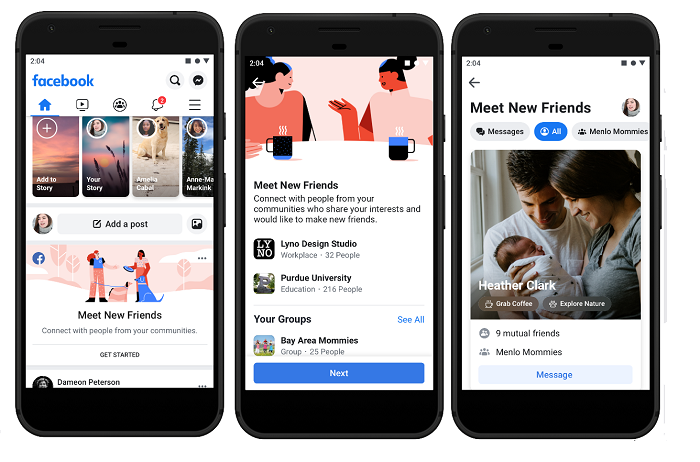 Facebook is very keen to show that its platform is not just used for manipulation and viral content, that it is actually beneficial in a community connection sense, so the focus on Groups makes sense, while 'Meet New Friends' could facilitate real-life meet-ups, and forge even more connection between users, while increasing the utility of the platform.

In addition to this, Facebook is also rolling out some new, dedicated features for specific groups:

"Different communities have different needs, so we’re introducing new features for different types of groups. Through new Health Support groups, members can post questions and share information without their name appearing on a post. Job groups will have a new template for employers to post openings, and easier ways for job seekers to message the employer and apply directly through Facebook. Gaming groups will get a new chat feature so members can create threads for different topics within the group. And because we know people use Facebook Live to sell things in Buy and Sell groups, we’re exploring ways to let buyers easily ask questions and place orders without leaving the live broadcast." 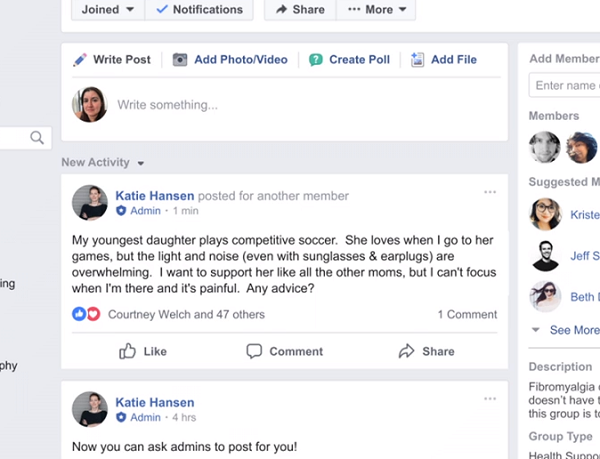 You can see in this example that the question has been posted by the group admin of a health group, with an additional note that says "Posted for another member". This will enable users to ask more specific questions without the concern of embarrassment, and may open up groups to more questions as users feel less concerned about outside scrutiny.

Of course, there is still some record of who's asking the questions somewhere, so some users may still be hesitant to get too personal on Facebook. But either way, it's a good option that should open up the utility of such groups.

For businesses, the Facebook Live addition could be most interesting. As noted by Facebook, it's looking to add an option which would "enable buyers to ask questions and place orders without leaving the live broadcast". That could provide small businesses, in particular, with a way to better connect with their audiences, and sell products through Buy and Sell groups.

Facebook has also provided a new update on Facebook Dating, which is being rolled out to 14 new countries, in addition to the five it's already active in. 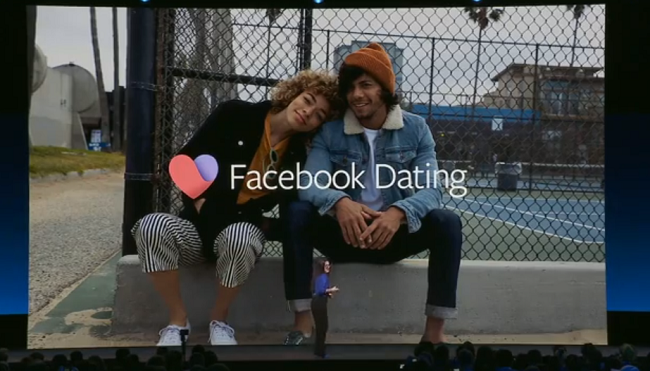 And in addition to providing a way to connect with other users through your dedicated Facebook Dating profile, Facebook's also launching a new feature called 'Secret Crush', which will enable users to select up to nine of their Facebook friends who they would like to express romantic interest in. 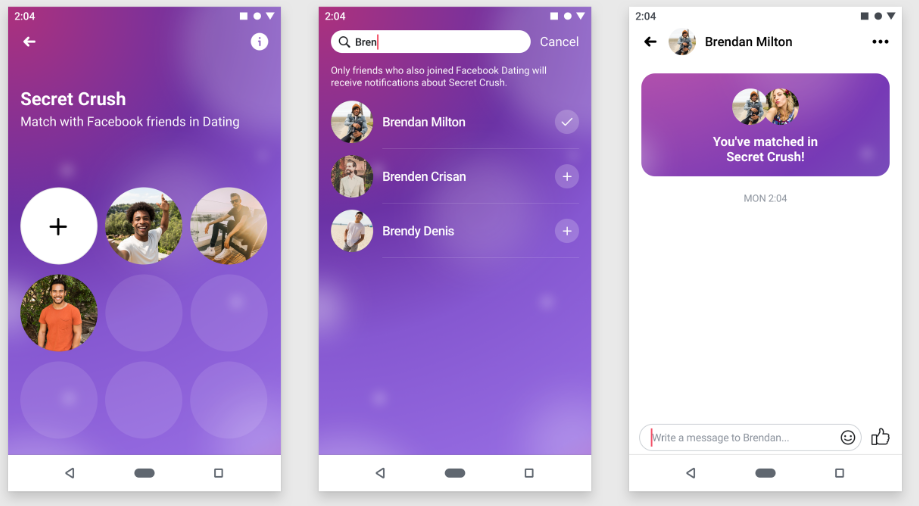 It's like Tinder, but for that friend who you've always seen as maybe something more.

Facebook's also adding a new option that will enable Marketplace sellers to ship items anywhere in the continental US, and for buyers to pay for their purchases directly on Facebook.

As you can see here, the new option will enable sellers to nominate their delivery/shipping details, which will be factored into the total cost on the listing. The options will broaden the field for Marketplace, providing new opportunities for both buyers and sellers to get more out of the option.

Facebook's also adding a new Events tab which will show users more of what’s happening around them, and will include refined recommendations, local business listings and new tools to help organize outings with friends. 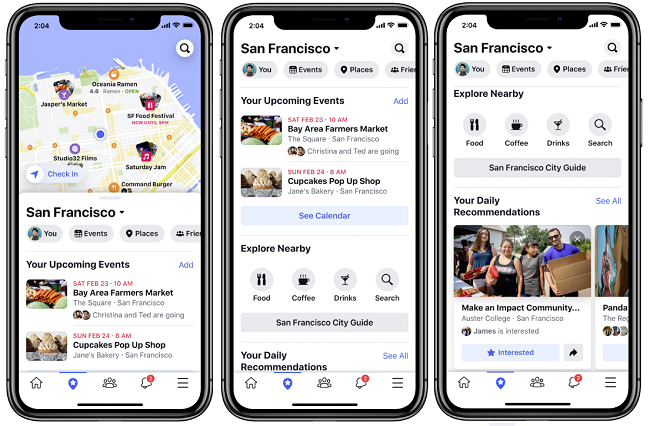 And lastly - in not quite main platform news - Facebook has also announced that it's launching its Portal smart speaker device in more regions, and adding encrypted WhatsApp video chat as an option, increasing privacy. 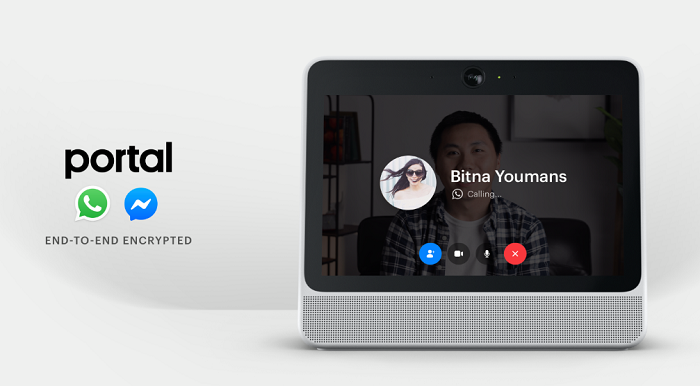 With Facebook's aforementioned privacy issues, adding in more options to help secure the use of the tool is a good move, and may make it more appealing to a wider range of users.

The international rollout of Portal will begin in June in Canada, with Europe following in the fall. As reported by TechCrunch, Portal, which was initially only launched in the U.S., has thus far, according to Facebook, performed better than the company had expected. Facebook didn't provide any specifics on this, but the expanded rollout will give Facebook more capacity to build on the tool with a view to making it a more essential interactive tool.

And worth noting, recent reports have also suggested that Facebook is working on a new variation of Portal that would enable you to turn your home TV set into an interactive video device.

There's a heap to take in here, and to consider in your platform approach. Facebook's F8 is always packed with products updates and announcements, and this year is no different - worth taking a moment to consider the implications of each update and what they could mean for your Facebook strategy.