Facebook Implements New Data Controls - But is it Too Late to Stop Misuse?

Right now, we’re on the brink of what may be the biggest shift in social media marketing in the practise’s short history, with some of the major strengths of social ads in danger – or at least, set to see significant change which could affect how marketers use them.

The Cambridge Analytica scandal is a wake-up call for consumers, and it won’t only be Facebook and other social platforms affected, it’ll stem to every data collection company and every process which is tangentially linked to the practice.

Here’s an overview of the latest updates, and their potential impacts.

In response to the ongoing examination of the Cambridge Analytica case, Facebook has announced a range of new measures to limit the amount of data third-party providers can access.

Among those changes, Facebook is implementing immediate restrictions on:

These changes will have significant impacts for a range of third party tools – if your favorite social management app is having trouble with Facebook apps, this would be why.

The information lock-down will give Facebook more control over the data users submit, enabling them to limit misuse, as in the case of Cambridge Analytica – which Facebook also says may have potentially accessed data from 87 million accounts, up from the 50 million previously reported (not by Facebook). 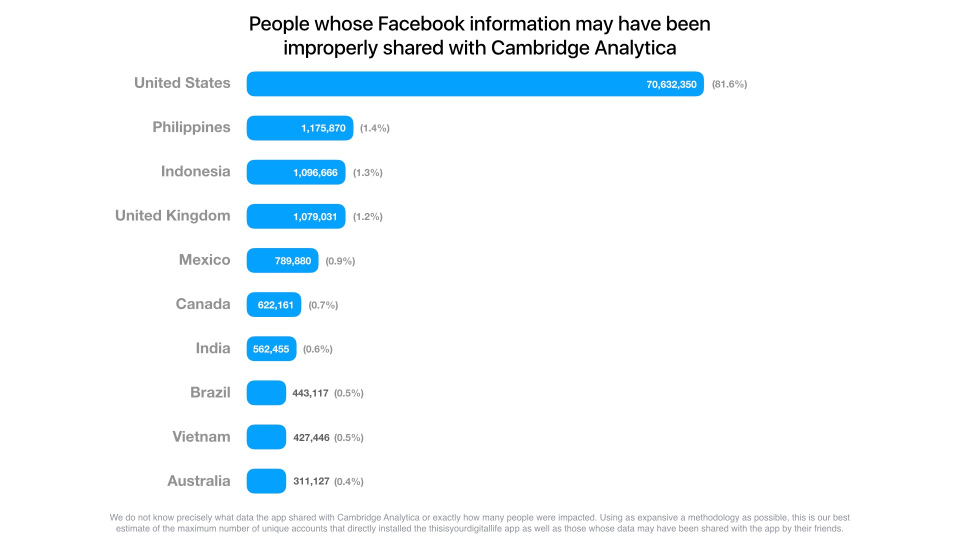 The revised figure has added more fuel to the fire, with user unrest rising. The #deletefacebook movement has been gaining momentum for weeks (note: Facebook says they’ve seen ‘no meaningful change’ in usage as a result as yet), and with these new measures, Facebook’s showing that it is taking the concern seriously, that they’re not simply waiting for it to blow over as they have with some previous controversies.

In addition to this, Facebook will also push out a new privacy update at the top of all user feeds from next week, which will include a quick link to see which apps you use and the information you’ve shared with those providers. 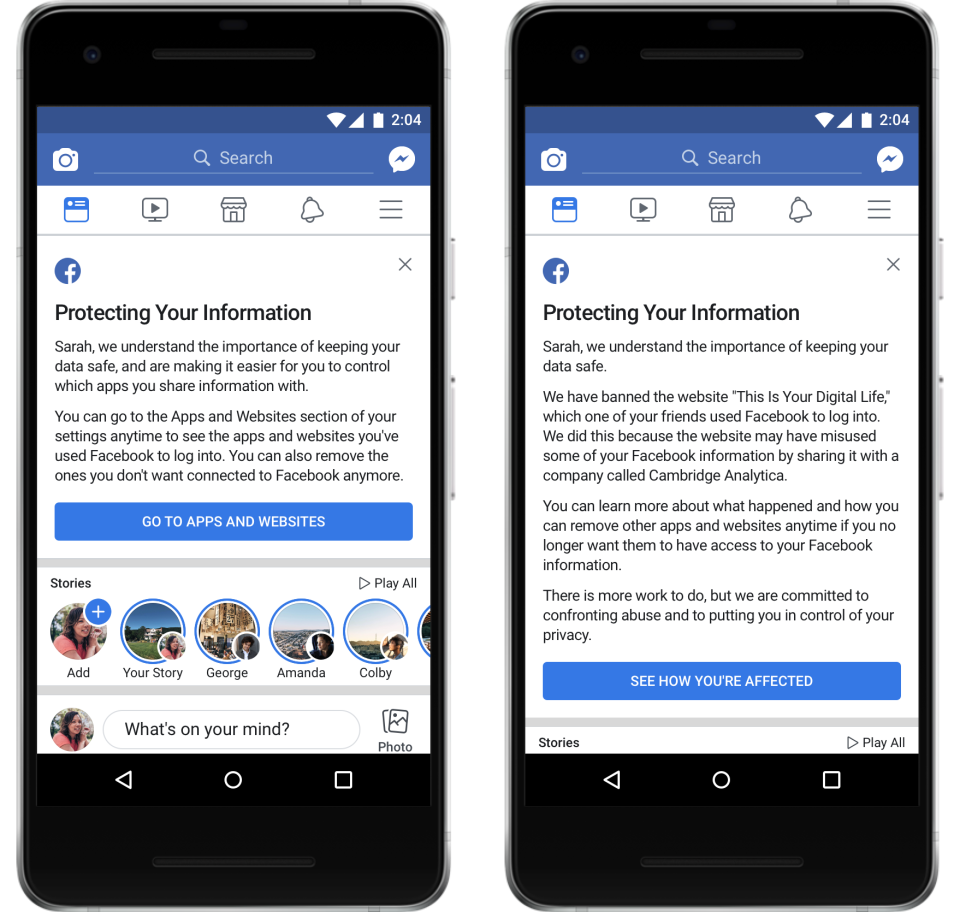 The message will also inform users if their data may have been accessed by Cambridge Analytica.

Facebook has also updated its terms of service to further clarify how user data is and can be used.

The company is very clearly, and demonstrably, moving to take action and reassure users – but will that be enough? And is it, in some ways, too late?

As we’ve noted previously, part of the wider problem with the Cambridge Analytica issue – which may really be only the tip of the iceberg in terms of how Facebook data could have been misused – is that your Facebook data, despite being seemingly innocuous, can be highly indicative of your psychological leanings and habits. And more than this, those data points will likely remain accurate forever – the user data already out there will remain accurate, even if you restrict further access from now on.

Of course, there’s not a lot more Facebook can do about this, and part of the problem that’s now developed was largely unforeseeable – Mark Zuckerberg, when he was building his ‘The Facebook’ app in college could not have known that it would one day grow to become a 2 billion member goliath, and the largest repository of personal data and insights in existence.

But it has, and Facebook has not been adequately prepared for the full consequences of what that means. Facebook collected data for its own purposes, and to build its ad targeting system, eventually constructing something of a marketers’ dream - a detailed, in-depth personal insights engine that’s constantly being updated and refined, helping to reach people based on the most intricate of interests and traits.

The opposite side, of course, is that such insights can also be used for ill purpose. As we saw during the 2016 US Presidential campaign, our growing reliance on Facebook as an information source enabled foreign operatives to use those data insights against us. And then there’s Cambridge Analytica, which, reportedly, used psychographic targeting to manipulate voters based on their personal traits.

As noted, Facebook likely couldn’t have foreseen this would happen – in fact, no one could have, and that’s further evident in the development of technological platforms beyond The Social Network.

Yes, Facebook’s data collection tools are the key focus right now, but the rate at which we’re uploading personal data more broadly is rising fast, so fast that no one understands the full potential impacts of such insights.

Indeed, in a widely quoted stat, some 90% of all the data in the world has been generated in the last two years. 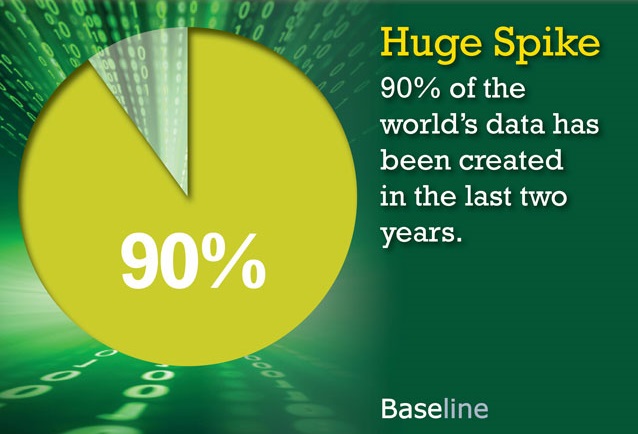 That figure is a couple of years old now, but the impact remains the same – if it that figure has reduced, there’s still way more data now available than there has been at any other time.

And that’s before you consider the potential impacts of AI – just this week come reports that thousands of Google employees have signed a letter protesting the company’s involvement in a Pentagon program which uses artificial intelligence to interpret video imagery, and could be used to improve the targeting of drone strikes.

Technological advances are quickly propelling us towards a new future, which will have many great benefits in helping us understand who we are, improving security, detecting health issues and concerns, and providing more relevant, meaningful connection opportunities.

But such insights, as we now understand, can also be used by bad actors.

And even if Facebook were to disappear entirely, that wouldn’t eliminate the broader problem.

The Cambridge Analytica case has essentially opened up the broader conversation that we need to have about big data - and in the immediate term, social media marketers can expect to see significant changes in targeting capacity and tools, and the ways in which they can access and use such info. As noted, data targeting is one of the medium’s biggest strengths, and that’s now likely to take a hit.

Will that make social targeting less effective? Probably not, but it may mean brands will need to take a more specific approach to each platform, with data aggregators and tools likely to lose some access.

There will, of course, still be approved data partners and tools which will remain of great use, but with more changes coming, there will be some major process shifts advertisers need to be aware of – the free-for-all data access of social is going to change, especially as we see more examples of misuse emerge.

But as noted, what will be more interesting is seeing how the case impacts big data usage more broadly, whether we see a new regulatory structure put in place to enforce rules on such applications, and how that impacts the various systems.

We don’t know the full impacts - because no one does - and we likely won’t know the potential issues till it’s too late. Unless someone steps in now and implements restrictions, implements changes which may be able to curb such misuse.

Is that even possible? Is there anything that can be done to hold back the data flood and save us from misappropriation of our insights?

The next moves will be very important to note.