As it looks to make a bigger shift into eCommerce, Facebook is also working to streamline its payments processes, in order to make it as easy as possible for users on both Facebook and Instagram to quickly make purchases based on posts and ads in each app.

That appears to be the main motivation behind Facebook's new Account Center option, which will enable users to connect and authenticate their Facebook, Instagram and Messenger accounts from a central home, which will then save them having to re-open each app when using it as a log-on or payment option. 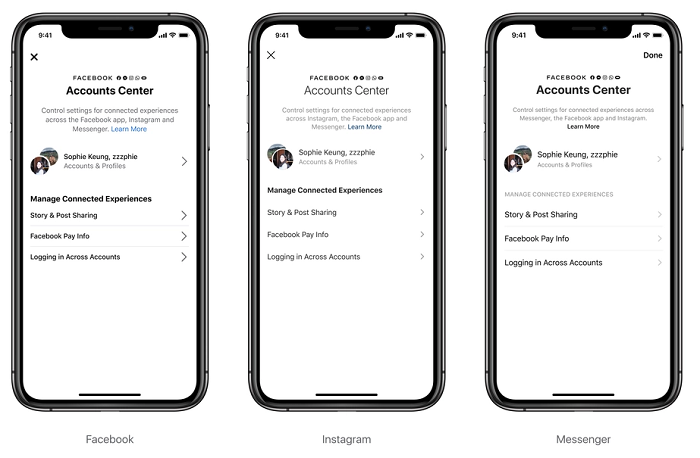 As you can see in these screenshots, the Accounts Center, which is being launched this week in a limited test, will offer three types of account linking:

Essentially, the option's designed to make it easier to stay logged in and streamline your experience within Facebook's apps, while also linking your various accounts within Facebook's back-end systems. That'll help improve its data tracking processes by providing more context on your usage across each app.

But really, Facebook Pay is the key focus here.

I mean, you can already cross-post Stories in each app, and most people these days have their log in details saved on their devices, so there's not a huge benefit there, you would think. But by linking all your Facebook accounts back to a core payment option, in Facebook Pay, that could make it much easier for Facebook to prompt impulse purchases, especially, as noted, with more Facebook and Instagram Shopping options on their way.

Expanding Facebook Pay has become a key focus for The Social Network ever since its Libra cryptocurrency project started facing challenges over the last year. With Libra, Facebook was hoping to create a simple, cheap way for people to move money around within Facebook, but various regulatory concerns have slowed the project's development, which has then forced the company to look at other alternatives in order to facilitate funds transfer, and ultimately, eCommerce exchange within its apps.

On-platform transactions are how digital platforms can transcend their communications roots. In China, for example, apps like WeChat have become key connective tools, with Chinese citizens almost needing to have a WeChat account in order to pay their bills, buy public transport tickets, provide ID - everything is virtually linked to your digital identity through WeChat's QR code system.

That's where Facebook sees major opportunity, especially in developing regions like India, where Facebook recently made a $5.7 billion investment into local internet provider Reliance Jio as a way to link into the emerging Indian market.

With Libra still in development, Facebook Pay has become the key focus for this push, and as such, making it easier to link your Facebook Pay account to every other Facebook app is a key element in facilitating on-platform purchases, funds exchange, remittance, etc.

Of course, as noted, Facebook also benefits from the extra data, by having more users connect their various accounts - and Facebook also notes that users can still link their accounts even if they have distinctly different profile names and identities on each app, if they so choose. But the main benefit is being able to connect its Facebook Pay option to more surfaces, which, eventually, will make it easier to make purchases at any time, in any Facebook app.

That could also make Facebook's apps that little bit more intertwined, which some see as an insurance policy, in case regulators ever wanted to try and break-up the company due to antitrust concerns. Facebook is also still working on connecting its messaging systems, linking its systems together. That could mean that, if it ever did come to a possible break-up discussion, Facebook could, theoretically, argue that such a move would not be possible if all of its apps and tools were connected via a more solidified back-end network.

But really, payments looks like the main impetus in this case.

The new Accounts Center is being tested with some users, with Facebook Pay connectivity coming later in the year for US users.