Facebook's experimental NPE app development team has launched yet another new app, with a rap music tool called BARS that provides a selection of hip-hop beats that you can put your raps to, along with vocal effects and other tools to help bring your music to life.

As explained by NPE:

"Audio production tools can be complicated, expensive and difficult to use. With BARS, you can select one of our professionally-created beats, write lyrics and record yourself dropping bars. BARS auto-suggests rhymes as you’re writing to keep your flow going. You can also jump into Challenge mode and freestyle with auto-suggested word cues. Choose from a variety of audio and visual filters to take your creations to the next level." 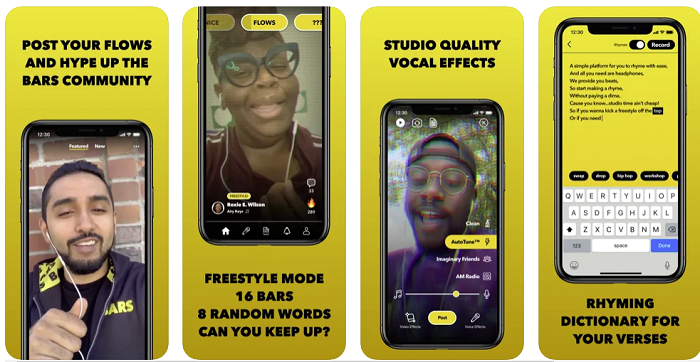 As you can see here, the UI of BARS is similar to TikTok, with a vertical feed, along with 'Featured' and 'New' tabs.

That's no coincidence - TikTok has become a key discovery platform for music, with songs forming a central part of the app's sharing dynamic. BARS looks to tap into that same behavior - though interestingly, it doesn't offer collaborative or remix tools, which, you would assume, would be a key engagement benefit. Having response or remix options could facilitate virality, the way it does on TikTok, which would see more participation. But right now, BARS is more focused on helping aspiring rappers get their ideas down pat.

As reported by TechCrunch, the video clips in the BARS app can be up to 60 seconds in length, and can be saved to your Camera Roll and/or shared out on other social media platforms. That could help to boost its populairty - Instagram Threads, for example, its separate messaging app, recently saw a spike in downloads due to its automated, on-screen captioning feature, which many TikTokers have used to record their clips, which they've then uploaded to TikTok.

BARS could see similar, with wannabe rappers putting together their tracks in BARS, then uploading them to TikTok for a wider audience. That could bring more people to the BARS app, and the NPE team could then look to provide remix and engagement tools to keep them there - but given its limited scope, it's hard to see BARS gaining significant traction as a standalone app.

But then again, maybe it will see wide adoption in rap communities, and that could be enough to build its audience. It's hard to know exactly what Facebook's aiming for, because its NPE experiments are generally indicative of some social trend that they're trying to tap into.

Either way, it seems like an interesting app, which, depending on the beats and effects on offer, could see solid adoption.

But as noted, I would anticipate seeing BARS clips in TikTok, and it gaining ground that way, rather than working in isolation.

It's the 12th app launched by Facebook's NPE team over the last 18 months, with each experiment seeking to find new ways to boost engagement, and solidify Facebook's offerings. Some of those apps have already been shut down, but Facebook is still supporting most, which suggests that it is seeing some signs of promise from the varying options.

BARS is currently only available to selected users in the US (you can sign up for the waitlist in the app). If you're interested, you can stay up to date on the app's progress via its dedicated Instagram account.