Facebook Watch is still in its early days, with the video content platform only being made available to all users, globally, back in August. But even so, thus far, it hasn't taken off.

A recent study by Diffusion Group indicated that 50% of adult Facebook users in the U.S. had never heard of Facebook Watch, while a further 24% were aware of the option, but had never used it. Facebook itself has reported that Watch has a base of about 50 million viewers in North America, with a 'highly active' group of around 14 million users. But still, that's a long way off YouTube's 1.8 billion monthly active viewers, even considering this is only one market.

Introduce new, popular content for one, which they are doing in the form of a new version of the 'The Real World', and new programs starring recognized celebrities like Jada Pinkett-Smith and Catherine Zeta Jones.

But even with these, Facebook apparently isn't confident that it can take on other video platforms vying for younger audiences.

So it's switching up - according to CNBC, Facebook is now pitching publishers on programming aimed at older audiences, as opposed to Millennial-focused content.

As explained by CNBC:

"One media company said Facebook was asking them for shows hosted by traditional celebrities rather than social media stars. Another company said Facebook wants shows for a broad audience, but not focused on anyone who was under the age of 20. Any teen shows need to have adult themes that could attract older viewers. Facebook was also asking for more formats that may be familiar to traditional TV viewers and middle America, like reality and talk shows."

That makes sense, especially given younger audiences are more inclined to tune into video content on Snapchat and Facebook-owned Instagram. It could actually be that Facebook doesn't want to cannibalize Instagram's IGTV, which is focused on shorter content aimed at youth markets, but then again, it could also be that Facebook is working with demographic trends and admitting to what it now is - a social network for, primarily, older users.

That seems to be the broader implication of various reports, that Facebook, over time, is losing touch with younger users, who are reportedly spending less and less time on the platform, in favor of newer, cooler options. Such might not be reflected in Facebook's active user numbers, as most people now check Facebook as part of their daily ritual, so they are logging in regularly. But time spent among younger groups is believed to be in decline, something which Facebook hasn't provided specific insight on in a while.

Given this, it makes sense for Facebook to shift focus, but you would also expect that older groups are the ones less likely to be tuning into to TV-like content via digital platforms.

I mean, that theoretically hasn't been the case for Netflix, where Gen X users lead the way in terms of accounts. 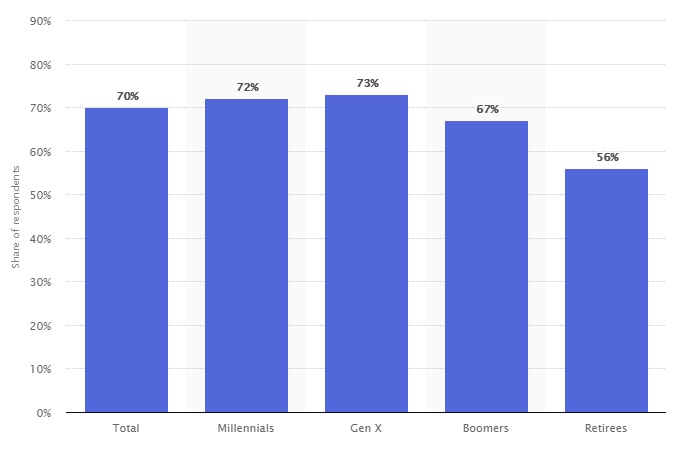 It's still more skewed towards younger audiences, but take up in those older brackets is solid - but then again, this is based on subscriptions, not usage. It doesn't necessarily mean that the person paying the bill is the primary viewer.

But Facebook, as always, has the data, they must see potential in creating Watch content that will appeal to older audience groups, as opposed to trying to win over youngsters. Whether that will help improve take-up of Watch, and help it compete with YouTube, we'll have to wait and see, but given the rising prevalence of people watching digitally-originated content on their home TV sets, this is definitely an area of significant potential. If Facebook can get it right.