Snapchat remains the most popular social platform among younger audiences, but Instagram is now seeing more usage. That's according to a new report from Piper Jaffray, which incorporates responses from 8,600 teens, with an average age of 16, from across 48 US states.

The scope of the report certainly adds weight to the findings - Piper Jaffray's researchers sought to gain insights into a range of trends, including social media usage, and have revealed, once again, that Snapchat, while it may not be growing at the rate it once was, remains highly influential.

First off, on platform usage - Snapchat is still an app teens regularly check, but Instagram usage has slowly ramped up over time.

But either way you look at it, Snapchat and Instagram are well in front - note, too, the declining Facebook usage trend, down from 60% in Spring 2016 to 36% now (Twitter is also down significantly from the previous report).

If you want to reach teens, Snapchat and Instagram are where you should be looking, and younger users also tend to drive adoption trends in social, which suggests both are worth keeping in touch with. You may have been less inclined to invest too much into Snapchat going on recent market sentiment, but it still has strong allure with young users.

Interestingly, teens also identify Snapchat as their favorite platform, ahead of Instagram - and by a significant margin.

That sentiment is interesting - could it be that Instagram is still, in some way, linked to Facebook and that's bringing it down? Could it just be that Snapchat is the 'cooler' app of the two?

Tapping into trends is something that Snapchat has proven particularly adept at - and something Facebook desperately wants to be able to do - so it's interesting to see that, again, despite broader market concerns, teens still affiliate with Snap, even though they use Instagram more often (Twitter and Facebook have both lost 10% of sentiment in this regard). 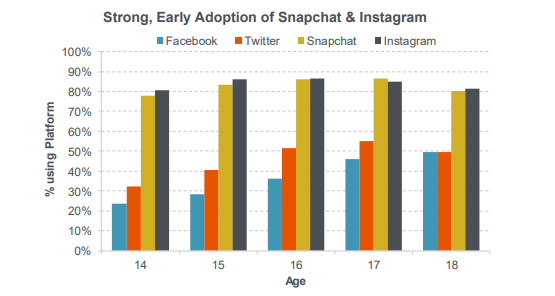 Basically, younger users don't care about Facebook and Twitter, but older teens kind of do - though again, it's clear that Snap and Instagram are out in front.

The most worrying trend for Facebook, however, is probably this graph: 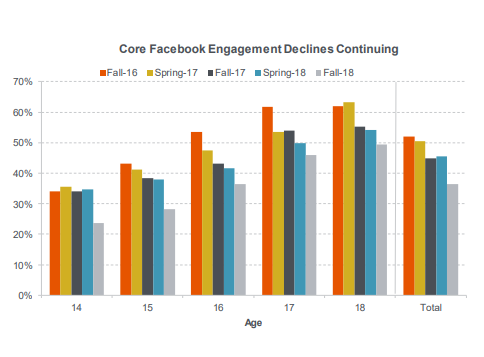 Over time, fewer and fewer teens, across all age groups, are paying attention to Facebook - and worth noting, on the 'Overall' chart, you can see that it actually increased slightly in the previous report.

This trend likely won't be helped with all the negative press around user privacy and data breaches - and while Facebook clearly has the most users overall, the stats show that it is losing touch with key younger markets. Facebook Stories, live-streaming, Facebook Watch - none of these appear to be helping the platform regain that connection with teens just yet.

And here's an especially relevant one for social media marketers: 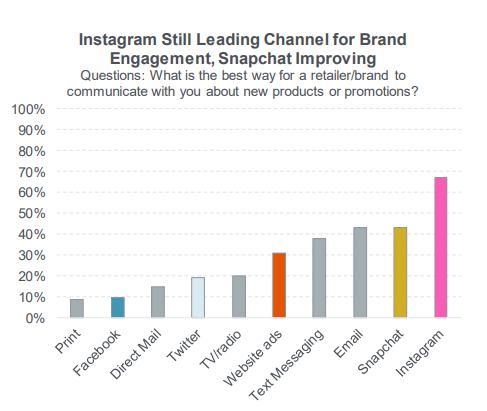 Teens prefer to see brand and product-related content on Instagram, with Snapchat the second most popular option (just ahead of email). Facebook is way back, despite it being the most popular platform for marketing. Of course, there is a question as to how much spending power teens have, but if you're looking to build brand awareness, and reach younger audiences, Instagram is, seemingly, where it's at.

Also interesting - messaging apps came in fourth, showing that there may be more value to brand communications via Messenger, WhatsApp and the like yet.

And the other key chart of note from the report is this one, which shows that influencer marketing is becoming increasingly popular, particularly for beauty brands. 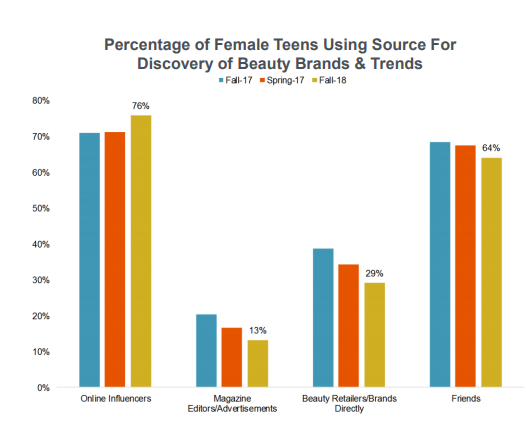 Friend recommendations declining, influencer recommendations on the rise. If you're marketing beauty brands, it's worth considering the power of influencers - and Instagram - in your approach, while trends like this are also indicative of habitual shifts in product discovery.

There's a heap more insight in the full report, which looks at a range of teen trends, beyond just social media usage. You can check out the full Piper Jaffray 'Taking Stock with Teens - Fall 2018' report here.