Facebook is looking to expand its paid events feature into minor league and local sports, which would give these smaller competitions more opportunities to generate income, while also bringing more viewers to Facebook, helping to boost its video offerings.

As reported by CNBC:

"The social media giant envisions high school sports teams and smaller leagues using the feature that allows users to make money for virtual attendance, and keep ticket profits - for now. And Facebook plans to invest in paid online events, the live-streaming feature that lets you pay for a virtual “ticket” to watch, sort of like pay-per-view on cable." 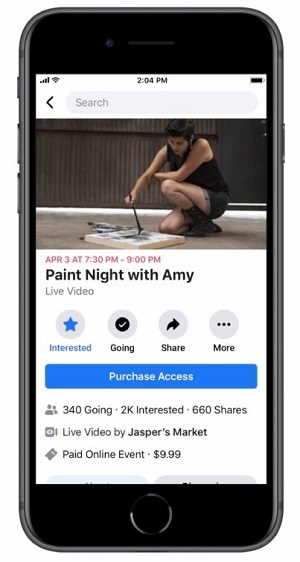 As you can see here, through this process, users can create events that require payment to access, which, as CNBC notes, Facebook currently passes on, 100%, to creators.

The next stage could see Facebook build out a slate of local sports matches, all accessible via digital tickets, enabling viewers to tune in from anywhere, and potentially building a new ecosystem of live sports engagement.

Which is not entirely original. Twitter has tried the same approach, with live-streams of various second-tier sporting competitions, with a view to building niche audience followings, and maximizing its own live video inventory.

That's produced mixed results - but the difference in Facebook's case is that these would be ticketed events, providing direct revenue potential to sports leagues, and further incentivizing promotion and amplification of such among their dedicated fans.

And that could also have benefits for advertisers, by providing promotional opportunities among more specific audience subsets.

For example, let's say you sell lacrosse equipment - it would be of significant benefit to be able to market to lacrosse fans, specifically, within different regions. That might not be a highly lucrative market for Facebook ads, but if it can build a slate of these smaller league sports, and provide dedicated ad opportunities for a range of businesses, that could end up being a big winner, if it can get it right.

And that's before Facebook considers taking a cut of ticket prices, which is also no doubt on the horizon.

Given this, it makes a lot of sense for Facebook to look to expand its paid events tools in this way, and it'll be interesting to see what sort of sports catalog it can build, and whether that extends to pro-sports leagues, furthering its video offerings.

It could end up being a big winner for local and niche brands. We'll keep you updated on any progress.