How Twitter Could Win Out in Streaming TV Through Niche Focus

Twitter's focus on video seems to have been misinterpreted by many, while their actual strategy could end up yielding significant results - both for Twitter and for advertisers alike.

This week, Twitter's announced a new deal with Bloomberg to have Bloomberg broadcast content on their platform 24/7 - the first such deal since Twitter announced its intention to provide round the clock live-streaming content - along with a range of additional content partnerships to expand on their current video offerings. 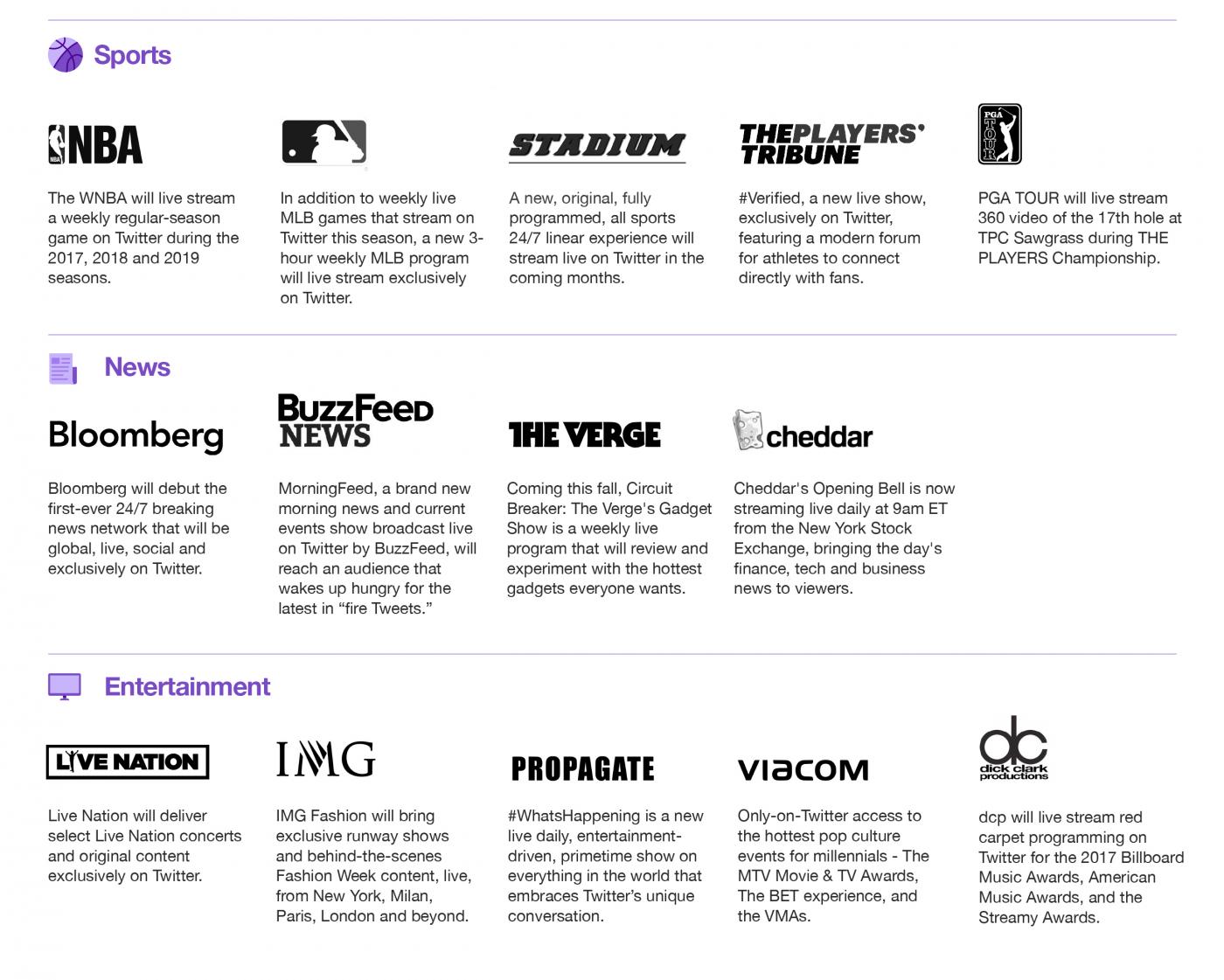 "In Q1 this year, our second quarter since launching live video on Twitter, we delivered over 800 hours of live streaming premium video content across more than 450 events, driving an audience of 45 million unique viewers. And this audience is global, mobile, and influential, with 55% of our logged-in live viewers being under the age of 25."

This, once again, underlines that Twitter's going 'all-in' on video, and with bigger players on the horizon, this could be a difficult path. But then again, Twitter's broader-focused approach (note: 450 events) is key to their vision.

Here's why Twitter's video strategy could end up winning out - and winning you over as an advertiser as a result.

Twitter's biggest move into premium, live video content came last year, with the announcement of their deal to stream Thursday night NFL games, an arrangement which saw them bring in more than 2.7 million viewers per game on average. Those figures aren't mind-blowing - NFL matches on TV typically get around 16.5 million viewers - and as such, many people saw this as a failure, at least in terms of it not bringing across million more users to help Twitter boost its platform.

That perceived failure was further exacerbated when Twitter recently 'lost' the NFL rights to Amazon, who paid $50 million for the Thursday Night Football rights. Twitter, by comparison, paid $10 million for virtually the exact same deal - hence, 'lost' is not exactly the word here, no one would pay 5X more for the same deal unless it delivered significant results.

But yet, that NFL deal has delivered significant benefits for Twitter, just not in the way you might think. Twitter might have failed to bring in millions of new users as a result, but it has done something which could end up being equally effective - they proved the platform's viability as a medium for streaming content.

This was also underlined by their coverage of the US Presidential debates - while the TV audience for three debates fluctuated, the live-stream audience continued to grow, not to the point where it was in competition with the TV audience, but there was steady, solid increases for each. 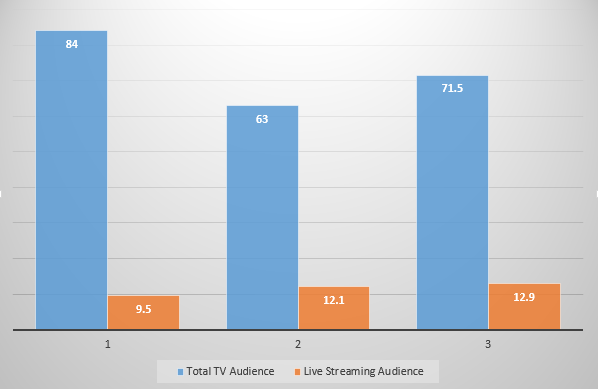 Tonight's #debate was the most Tweeted ever, with more than 17 million debate-related Tweets sent.

Twitter might not unnecessarily have built their on-platform audience significantly with the addition of such streams, but they were clearly able to build the case for their platform as a genuine broadcast option, and one that's on the rise at that.

They needed high profile events to do this. And now they're moving to capitalize on that use-case.

Here's where criticism of Twitter's approach has really kicked in - just as Twitter stopped broadcasting the NFL, they started adding in streaming coverage of other, more niche events.

Back in March, Twitter announced a new deal to broadcast coverage of the National Lacrosse League (NLL), a sport which is clearly far smaller, and had many suggesting that Twitter seemed to be taking whatever they could get. But the smaller market for lacrosse is kind of the point - no, it's not going to bring in millions of viewers every week, but it will play to a very dedicated, passionate niche audience, and could make Twitter the home for the sport online, the place lacrosse fans need to tune into. And if you're an advertiser looking to reach that market, that's the place you need to be.

"Oh great," I hear you say, "they've cornered the lucrative lacrosse market, that'll save them."

And you're right, in the wider scheme of things, a few passionate lacrosse supporters won't be a big deal, but that's not the only niche Twitter's targeting. 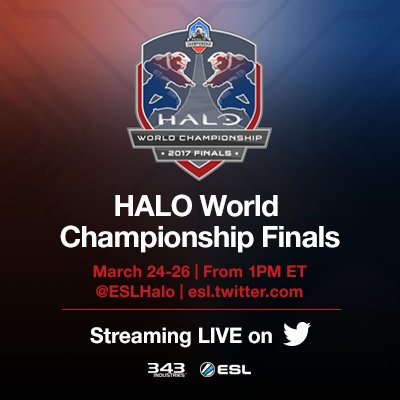 "Cool, so they've got Halo fans and lacrosse junkies, Twitter's on the way up."

Again, this is correct, these are only smaller audiences, they're not likely to bring significant attention or ad dollars - but Twitter's also signed deals with Pac-12 university sports, ESL, Campus Insiders and various others, giving them coverage of a wide range of niche events, and their fans. Yes, these are all much smaller than the NFL, but this is where Twitter may actually win out. If they go solely for the big providers like the NFL, bigger players, like Amazon, will be waiting to take them on. But if they can sign up a lot of smaller, niche players, and cumulatively build a large audience, they could grow their audience through coverage volume. And by becoming the key home for these niche markets, it could also become the critical medium for advertisers looking to tap into each segment.

This would make their ad products more effective, more appealing - by cornering many key markets, Twitter could continue to build itself as the key news platform for each (which, for many, it already is anyway) while also providing advanced ad options that can help brands connect with each with increasingly specific, focused campaigns.

This is where Bloomberg comes in.

"It is going to be focused on the most important news for an intelligent audience around the globe and it's going to be broader in focus than our existing network."

That second part is the important element. While Bloomberg already streams content 24/7 on other providers, through Twitter, with lower broadcast costs and reach to markets that are already using the platform for news purposes anyway, Bloomberg will be able to create more focused, niche offerings.

For example, if you look at the Bloomberg TV schedule, the programming covers a broad scale market focus - there are some more specific programs in there (like 'Bloomberg Technology'), but overall it's breaking market news.

But Bloomberg reporters are obviously working all day long, they have the capability to create more focused channels. What if they had a stream solely focused on each individual market sector? One on 'Rates and Bonds', one on 'Currencies', one on 'Commodities'. What about one on 'Technology'? One on 'Politics'. Through streaming on Twitter, Bloomberg will have the capacity to do this - and in doing so, each individual stream could become the key channel for each corresponding sector.

Again, they won't be reaching the widest possible audience, but they don't have to - honing in on one sector could end up making each stream the key information source for that industry, and, if effective, also the key channel for advertisers looking to reach that specific market.

Previously, such an arrangement wouldn't be possible, because the costs involved in running several channels would be just too high, but the flexibility of live-streaming will provide such functionality. Sure, there's still costs involved in transferring video content at scale, but Twitter already has the infrastructure to cater for this, and if they can get it right, the ad dollars will be enough to offset it.

The question then comes down to whether Bloomberg has the resources available to create and stream focused broadcasts 24/7, but as noted, Bloomberg is already streaming in various markets 24/7, and they've said that they'll be looking to better utilize user-generated content, sourced from Twitter and curated by Bloomberg editors, for this purpose. This may actually give them a good test case to see whether market-specific content is the future - with on-demand TV rising, maybe, in future, Bloomberg can move to a totally online model, with industry-focused content leading the way.

While in a broader sense, it would be better for Twitter to stream big scale events every day, that's simply not possible - but there's industry and niche specific news and discussion happening on the platform every day. Their new TV deals will look to amplify this, and could, at scale, help further establish Twitter as they key real-time news source.

And if they're focusing on your sector, if could also become the key place you need to be to reach your target audience.