Facebook is removing more fake and fraudulent accounts from its platform than ever before, and this week, as part of its latest Transparency Report, The Social Network has provided more detail on exactly how it detects and removes fakes, and where the actual percentage of fake profiles on its platform currently stands.

This has long been a key point of contention for marketers and social media analysts. Facebook, which currently boasts 2.38 billion monthly active users, has been able to post consistent, quarter-on-quarter gains in active accounts, despite its already massive size.

Skeptics have suggested that Facebook consciously leaves in some level of fake profiles, because it has little motivation to soften its own usage numbers, but Facebook, via its SEC filings, has maintained that it adheres to industry standards in reporting fake account numbers, and that, to the best of its knowledge, its reported fake account figures are accurate.

For context, in its previous performance reports, Facebook has listed the platform's overall fake account levels - accounting for both 'duplicate' and 'false' accounts - at:

Again, these numbers include both duplicate and false accounts, which are very different. But still, that is a lot of fake profiles, even with Facebook's detection processes working to restrict them. Facebook's scale shades percentage reporting somewhat here - just 1% of 2.38b is 23 million accounts, a significant problem even at very low levels.

So what's the current level of fake profiles on the platform?

"We estimate that fake accounts represented approximately 5% of our worldwide monthly active users (MAU) on Facebook during Q1 2019 and Q4 2018."

That's lower than previously stated figures - though, as noted, Facebook doesn't include duplicate profiles as fake.

In an accompanying post, Facebook has provided more detail on this specific element, explaining the various factors and considerations it takes into account when listing its fake profile numbers.

The most important note here is that Facebook only tracks accounts that have been active on the platform in its fake account numbers, with billions of fakes now being detected by Facebook's advanced tracking systems before they're able to establish a live presence.

Indeed, according to Facebook's Transparency Report, its processes saw the removal of some 2.2 billion attempted fake account activations within the most recent reporting period. 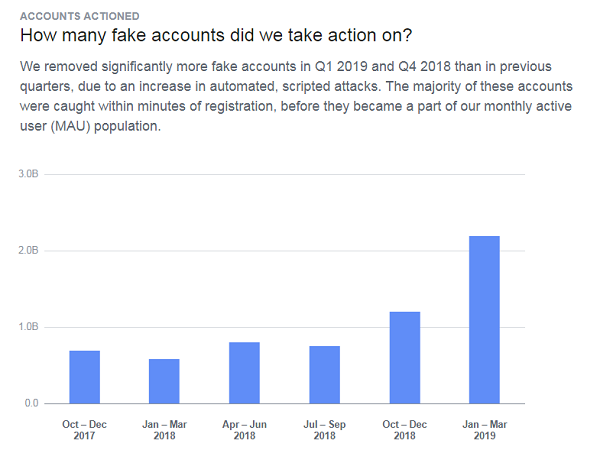 That could help to explain the drop in overall numbers - 2.2 billion accounts is almost an entirely new Facebook of fakes, which Facebook says that it's been able to stop from making it through.

As noted, those accounts that are blocked at the creation stage are not included in Facebook's overall fake profile count. The 5% figure stated above actually represents what Facebook calls 'prevalence', or the number of accounts that have actually made it through to becoming active, avoiding detection till that point.

"Prevalence of fake accounts measures how many active fake accounts exist amongst our monthly active users within a given time period. Of the accounts we remove, both at sign-up and those already on the platform, over 99% of these are proactively detected by us before people report them to us. We provide that data as our metric of proactive rate in the report."

Essentially, through advanced detection processes, Facebook says that it's removing more fakes than ever - but as noted, even at just 5%, that's more than 100 million fake profiles on the platform. 100 million is more than the entire population of the UK, or Germany, or Vietnam - 100 million fakes is still a lot, and Facebook may never be able to improve on that.

"...both from focusing on abusive accounts and from giving new accounts space to prove their intent, we expect there will always be a small percent of fake accounts on our services."

But Facebook does believe the vast majority of profiles are genuine, and that its 5% figure is accurate.

Facebook has even provided an additional note on ad integrity, and how fake profiles and views could be skewing ad performance stats:

"In addition to the questions we get about abusive fake accounts, we also get questions about fake accounts in general as it relates to advertisers getting a return on their investment with us. In the same way we want people to share on Facebook, and we know that they will only do that if they feel safe, we also know advertisers will only continue to advertise on Facebook if they get results — and we’re continuing to deliver returns for them despite the small occurrence of fake accounts."

So, yes, there are fake profiles on Facebook, millions of them, and there likely always will be. But Facebook is improving its efforts to squeeze them out, and the data suggests that the vast, vast majority of users are real, active people.

Duplicate accounts increase that 5% number somewhat, but the relative count is still small. And as shown in the above graph, Facebook is taking action, it is removing a lot of profiles, mostly before they're even able to connect with other users.

"We remain confident that the vast majority of people and activity on Facebook is genuine. We welcome feedback and scrutiny on fake accounts but are proud of our work to balance protecting the people and advertisers using our services while giving everyone the power to build community on Facebook."

Basically, Facebook says that it's doing all it can, within reason, while it's also always looking for new ways to improve. The skeptics will remain, but Facebook is held to a level of accountability through its SEC reporting obligations, and the explanations here outline exactly where there are potential drawbacks and gaps in its processes.

As such, Facebook, even with a consistent level of fakes, remains the largest social media platform, by a significant margin, and a key consideration in looking to maximize the reach of your messaging.