Despite the privacy scandals, the investigations, the reports that engagement on its main platform is in decline, Facebook has once again posted an increase in active users in its Q1 2019 update, along with another steady rise in revenue.

First off, on users - Facebook now serves 2.37 billion monthly active users, an increase of 55 million on the previous quarter. 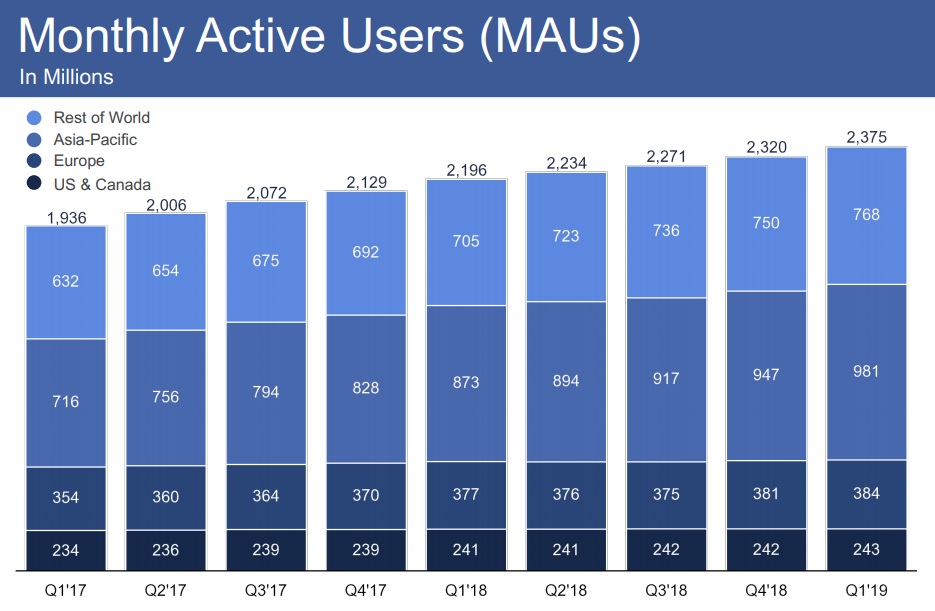 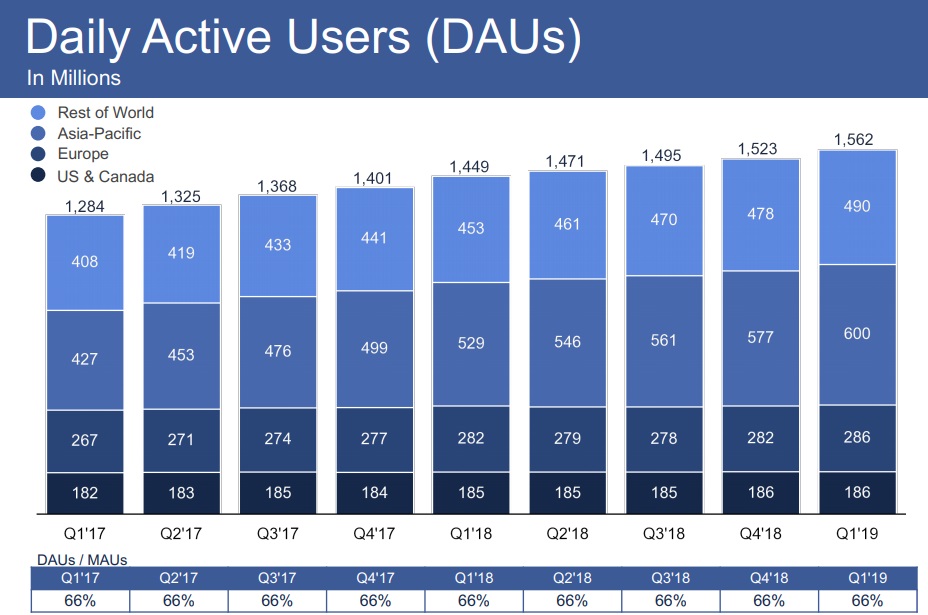 Despite rising concerns - and the fact that Facebook has been around for some 15 years - usage continues to grow, which is a massive achievement in itself. Of course, the larger the scale, the more Facebook's potential impact, which will continue to lead to further concerns from regulatory and government groups. But as a business, Facebook's continued capacity for growth is amazing, and something largely underestimated in most assessment.

As you can see from the above charts, Facebook's growth has slowed in North American and European markets, but the company's been able to continue its expansion in the Asia Pacific and 'Rest of the World' categories. That's been particularly boosted by Facebook's focus on India - since 2015, The Social Network has doubled its Indian audience base to more than 300 million, and only looks set to continue its expansion in the world's second most populous nation. 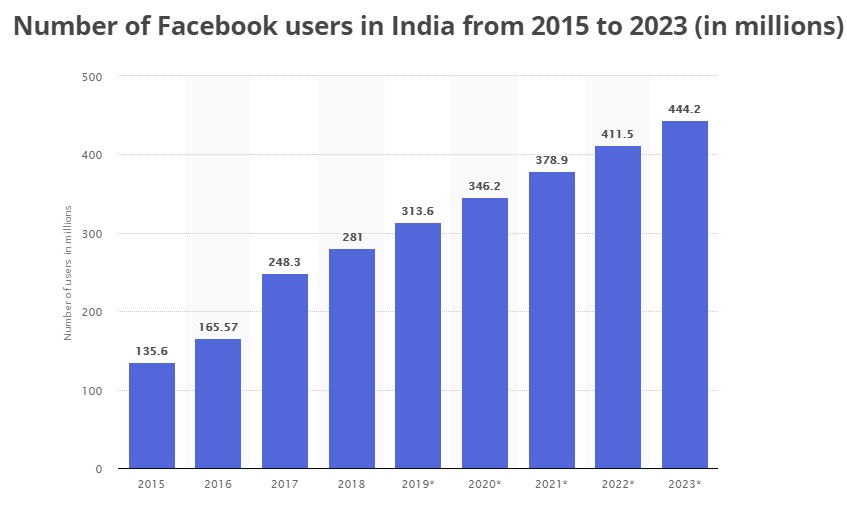 Given its secretive Blockchain project looks to be specifically focused on Indian users, the above estimates may even prove conservative - while other networks are still primarily reliant on North American usage, Facebook's expansion has put it in another stratosphere on this front, and enabled it to gain first-mover advantage in a range of new markets.

Also worth noting - in its Q4 2018 report, Facebook noted that it would soon be shifting to a new 'Family of Apps' usage measure, which would incorporate all users across Facebook, Messenger, WhatsApp and Instagram, providing a more complete view of the company's actual reach.

The company didn't provide a chart this time around, but it did give an update on this figure:

"We estimate that more than 2.1 billion people now use Facebook, Instagram, WhatsApp, or Messenger (our "Family" of services) every day on average, and around 2.7 billion people use at least one of our Family of services each month."

To put that in context, the population of the entire world is 7.7 billion, and half of them have no access to the internet. 2.7 billion total reach is massive, and should not go underrated. 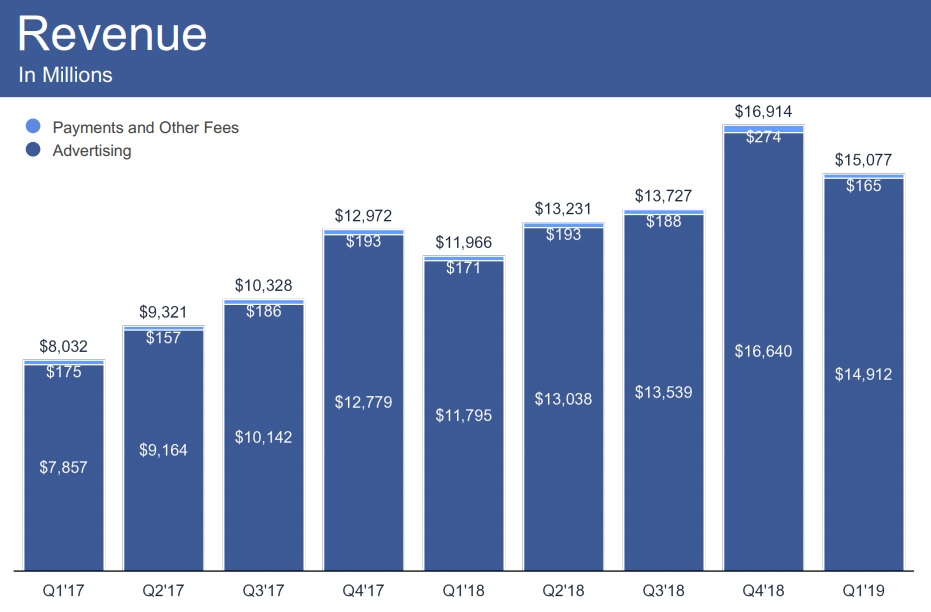 That's worth extra emphasis - for the quarter. Facebook's on track to bring in over $60 billion in total revenue in 2019. This is why premature reports of the platform's pending demise are foolish - even if Facebook were to lose momentum, to stop being cool, even to lose some users, it's still a massive company with a solid business model.

That said, the company is, indeed, likely to take a financial hit. In the accompanying notes, Facebook says that it's set aside $3 billion to cover a potential FTC fine stemming from an investigation into data privacy violations. The fact that Facebook can set aside $3 billion and still post such a strong result is, once again, testament to its organizational foundations.

Of course, with all that money coming in, calls for Facebook to increase its detection and moderation processes are also more justified - Facebook says that it's added more than 30,000 more moderators and safety staff in recent months, but concerns still persist. Governments in Australia and Europe are pushing for more significant penalties for social platforms in cases where they fail to remove offensive content in a timely manner, which could require Facebook to add even more staff to cater to such requirements. There are also concerns about the working conditions of such staff, another element which could add more cost - though even then, given the revenue numbers, and projections, Zuck and Co. should be able to increase their capacity without any significant, long-term business impacts.

The question then is just how effective such efforts can be, and whether Facebook is better or worse for broader civic engagement. And what, then, is the answer on this front.

On Stories, Facebook has also reported that Facebook Stories is now being used by 500 million people daily, which is the same amount of people using WhatsApp Status and Instagram Stories. As reported by TechCrunch, "that means that a third of Facebook’s 1.56 billion daily users are posting or watching Stories each day".

Facebook's execs have long held that Stories are the future of social sharing, and while Facebook Stories failed to gain immediate momentum, and still feel somewhat misplaced, the data shows that they may well be right. If you've not considered Stories in your social media marketing approach, the time is now to start examining.

"We are focused on building out our privacy-focused vision for the future of social networking, and working collaboratively to address important issues around the internet."

That shift will likely change Facebook's revenue streams, but the reliance on mobile, and the emergence of Stories, already have the company well-placed, even if it needs to replace the revenue of declining News Feed exposure. Through ongoing expansion, and its efforts to evolve user habits, Facebook is well-placed for the coming changes, and this report underlines just how significant The Social Network has become in our broader interactive landscape.