Facebook has today removed several ads and posts published by the Trump Campaign over their use of offensive historic references.

"We removed these posts and ads for violating our policy against organized hate. Our policy prohibits using a banned hate group's symbol to identify political prisoners without the context that condemns or discusses the symbol." 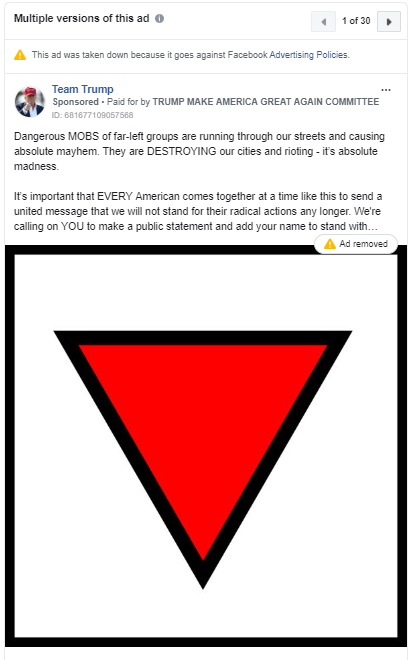 The inverted red triangle was used by the Nazis to identify political prisoners in Auschwitz, as noted by several scholars and academics.

The Trump campaign claims to have been unaware of this reference, explaining that:

Facebook, of course, has been under intense scrutiny over its approach to political ads, and its decision to take a hands-off approach to what campaigns promote, exempting political ads from its regular fact-checking process. Facebook's stance is that the people should be able to see what their elected officials have to say, as only then can they make an educated decision on who to vote for. There are various pitfalls in this approach, but thus far, Facebook has remained steadfast in its belief that it's taking the right action.

This latest removal, however, does reinforce the fact that there are lines that Facebook won't allow even politicians to cross.

But it will allow other forms of concerning speech. A key point of debate recently was Facebook's decision to leave these posts from Trump up, unchanged, despite Twitter taking some level of action on both.

The first example is the most contextually relevant in this instance, as it also includes an offensive historical reference.

Does this new action from Facebook suggest that they will look to take more action on such in future?

Would Facebook have taken the same action if the offending post came from the President himself, and not from his campaign"?

It's another interesting quandry around Facebook's political ad approach, which once again underlines the flaws in its stance. And it could clearly become a major issue headed into the November election.