Facebook Responds to First Rulings from its New Oversight Board

Facebook has today outlined its responses to the first rulings from its independent Oversight Board, which is now hearing cases that have been referred to it when users are not happy with an initial ruling from The Social Network.

The Oversight Board, which includes a range of experts in different fields, gives Facebook an independent arbitrator to assess its content actions. If a user thinks Facebook has made the wrong call, they can now apply to have their case heard by the Board instead, with Facebook committed to honoring the rulings of the group.

But will those rulings change Facebook's policy approaches as well? These initial responses provide some insight on that front. 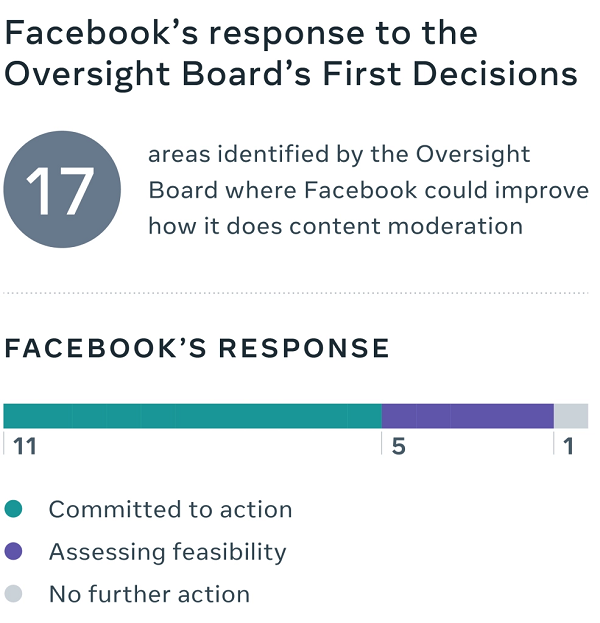 That's a positive sign - in almost all cases, Facebook is looking to not only action the individual finding, but also update its approach in line with the assessment.

The Oversight Board's first set of cases included an Instagram post related to breast cancer that had been removed due to nudity, a post in a Facebook Group which claimed that hydroxychloroquine is a cure for COVID-19 and a post that included an alleged quote from Nazi leader Joseph Goebbels.

Based on these initial cases, Facebook says that it will:

In addition to this, Facebook is also looking into how it might be able to improve its human review process for automated detection appeals, and provide more insight on automated enforcement

The only case where Facebook has opted not to act on the Board's advice relates to the labeling of COVID-19 misinformation, which the Board suggested could be less intrusive. Given the rising emphasis on this element, as the global vaccine roll-out ramps up, Facebook believes that it's taking the right approach on this.

These first responses seem like a positive first step for the Board's relationship with Facebook, with the platform looking to work with each ruling and take proactive action accordingly. The hope is that this new, independent review approach could be a new way forward for content decisions, reducing the onus on the platforms to be judge and jury on what can and can't be said, instead utilizing the insights of appointed experts to guide such calls.

But in many ways, this was something of a soft launch for the Oversight group. The first real test is coming soon, with the Board now set to decide on whether Trump is allowed to return to Facebook after his recent ban in the wake of the Capitol riots. Facebook referred the Trump case to the Board last month, and that will be a much more high profile ruling for the group to take on.

If the Oversight Board says Trump can come back, will Facebook let him? And will it have to update its rules around political speech, one way or another, as a result?

This will be a much bigger test for the experts.