Facebook's infamous News Feed algorithm has helped the platform maximize engagement, and boost time spent in-app - but it's also long been a major bugbear for many users.

The complex algorithm, which aims to show users more content that they're likely to be interested in, uses a range of factors in its equations, including when something is posted, how often you interact with the creator, what type of post it is, and more. 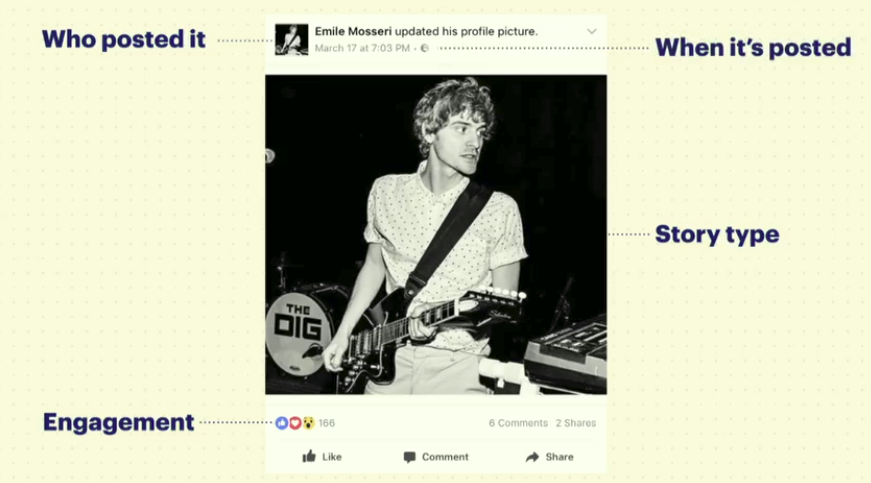 That means that users generally see posts that are seeing higher levels of engagement appear closer to the top of their feeds. But is that a better experience?

Would you be better off just seeing a feed of all the posts from all the people and Pages that you've chosen to follow in reverse chronological order - ala Facebook pre-2013?

You might soon be able to get a better perspective on this - this week, reverse engineering expert Jane Manchun Wong has uncovered a new Facebook test which would provide a simplified toggle that you could use to switch across to different variations of your News Feed. 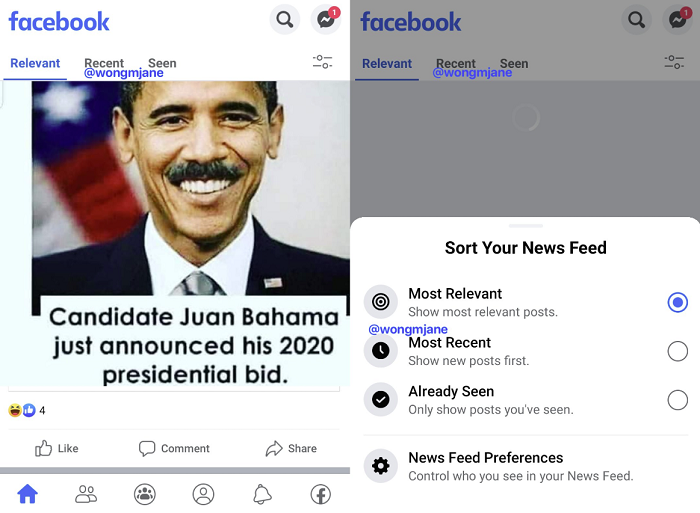 As you can see in these images, the test provides three different variations of the News Feed in separate tabs, which you would be able to access along the top of the feed list.

Those three versions are:

To be clear, the new listing options would not add anything to Facebook, functionally. Users can already access a reverse chronological News Feed by switching to most recent via the 'More' listing in the app (left image below) or clicking on the three dots beside 'News Feed' in the right-hand column on desktop. 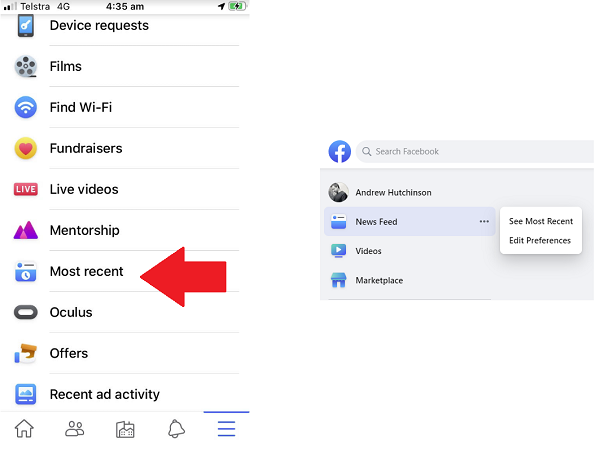 Those setting can't be saved, however, so whenever you do switch this, it will default back to the algorithm feed next time you log-in.

You can also view your 'Already Seen' listing via this URL: http://www.facebook.com/seen

This new option would make it easier to access both, which could be a welcome change. Facebook has confirmed that the option is being tested internally, though it says it has no plans to roll it out to the public at this stage.

But then again, it might not be as great as many users would hope.

While calls for less algorithm intervention constantly resonate through every platform which uses such, when people have been provided with the capacity to switch the algorithm off, most users haven't bothered to do so.

Twitter announced an option to easily switch between 'Latest' and 'Top' tweets back in November 2018, enabling users to essentially turn off its algorithm sorting (which it rolled out in 2016). But Twitter says that even with the option, most users have stuck with the algorithm-defined listing, while on-platform engagement has continued to rise, underlining its beneficial impact.

Facebook, too, has experimented with alternate feed options. Back in 2016, Facebook tried a similar process of tabbed News Feed listings, separated by topic, in order to boost engagement. 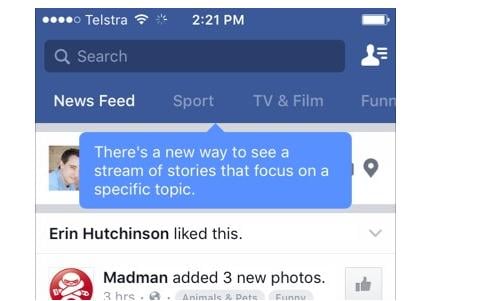 That didn't really work out, and Facebook abandoned the experiment before it got too far.

As noted, while the rumblings of dissatisfaction with algorithm-defined feeds are ever-present on every network which has implemented such, when provided with an alternative, most users don't bother changing their behavior.

Maybe, a reverse-chronological feed switch on Facebook would be different - but I wouldn't count on it.

Still, it is interesting to note that this is an aspect that Facebook is exploring, which would suggest that this is still an element where it believes it can generate more engagement. The introduction of an alternate, chronological feed also aligns with the broader social media shift towards giving users more control, and enabling them more specific choice over their feeds, as opposed to hiding the back-end processes and showing them what the system thinks they'll want - even if they don't realize it.

For example, Instagram recently rolled out a new option which enables users to see which accounts they interact with the least, which could show them which people and profiles they should unfollow to improve their experience.

Want to see which Instagram accounts show up in your feed the most and who you interact with the least? Now you can! Just tap “Following” and manage your list from there. pic.twitter.com/eKFOBCdutr

That's almost like a new level of trust from the platform - in the past, the apps have taken much of this type of control away, or hidden such insight from view, with the implication seemingly being that the algorithm knows better, and you should just trust that.

Now, with people more educated on how social platforms work, and what following certain people and pages means for their feeds, users are a little more discerning in their following habits. You can see this specifically on Instagram - the old 'follow for follow' trick, for example, isn't as effective on 'the gram' because people don't as readily add others on the platform as they did on Facebook and Twitter.

And because people are now more discerning, and more conscious of what they're allowing into their feeds, the need for algorithm dictation reduces - which is why platforms may now feel more comfortable allowing users access to tools like this, because the impact of them making such a switch is less than it would have been in the past anyway.

Or, as noted, they know that most people simply won't bother.

Either way, it's an interesting experiment, and it could change Facebook usage habits, if implemented. We'll keep you updated on any progress.