Facebook to Give Local News Stories a News Feed Boost, Starting in the U.S.

As part of Mark Zuckerberg's new mission statement for Facebook, which he outlined last February, one of the key measures emphasized was 'civic engagement' and using the power of Facebook to improve connection within local communities. That approach was solidified after Zuck's 'Great American Road Trip', in which the multi-billionaire CEO traveled to 23 US states and spent time with everyday folk, in order to get a better feel for their lives and how Facebook might be able to help.

As a result of this, and in response to the more recent criticisms of Facebook being misused by political forces (and questions over whether The Social Network is good for society), Zuck and Co. have already outlined how Facebook's infamous News Feed algorithm will be re-vamped to put more focus on people-to-people interactions, in order to increase engagement and strengthen relationships.

And now, Facebook has outlined the next phase of that process, with local news to be given a News Feed boost, as part of their broader effort to increase community engagement.

"People tell us they come to Facebook to connect with friends. They also say they want to see news about what’s happening in the world and their local community. This month, we’ve announced changes to prioritize posts from friends and high-quality news sources. Today, we’re updating News Feed to also prioritize local news so that you can see topics that have a direct impact on you and your community and discover what’s happening in your local area."

Facebook will identify local publishers as 'those whose links are clicked on by readers in a tight geographic area'.

"If a story is from a publisher in your area, and you either follow the publisher’s Page or your friend shares a story from that outlet, it might show up higher in News Feed."

That, inevitably, means less room again for overall Page content, and as noted by Facebook in their recent News Feed announcement, posts from Pages will see reduced reach as the News Feed shifts to put bigger emphasis on people-to-people interactions. Facebook says that any publishers, large or small, which focus on local sports and events will be eligible to benefit from this change, though smaller news outlets are more likely to see a boost, because they tend to have a concentrated readership in one location. 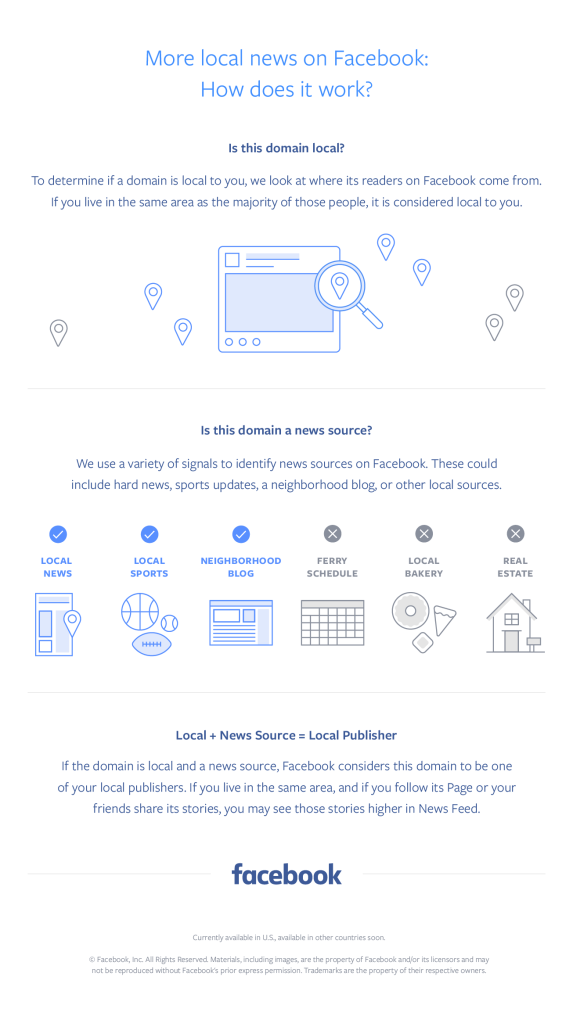 The update is in line with another recent Facebook test which has seen them add in a specific section within the News Feed for local news updates.

These listings are being trialed in six US cities, with a view to expanding community engagement and raising awareness of local events and groups. The broader News Feed update will also only apply to US users at this stage, though Facebook does note that they are planning to expand the update to other nations throughout the year.

As with the previously announced News Feed changes, its difficult to understand the full extent of this update and the impact it will have on Facebook reach, as we've not yet seen it rolled out. Only after it's been active for some period will we have enough data to understand the shift, though as noted, with reach for Pages overall decreasing, and more emphasis being given to local news within the fewer slots remaining for Page posts, it seems safe to assume that overall Page reach will only decrease.

But as noted, the actual results will vary from business to business, Page to Page - if you're focused on maintaining engagement and providing what your audience is looking for, that should hold you in good stead to maintain your Facebook performance. Though the overall challenges continue to mount for the majority of the Page managers.