Back in January 2019, Facebook announced its plans for a new Content Oversight Board, a collection of independent, external experts who would come together to review appeals of content decisions made by Facebook's moderators.

It's been heralded as a key element in improving Facebook's enforcement decisions, and making Facebook a better, safer place. And now, it's finally here - after a year and a half of development, Facebook has today announced that its independent Content Oversight Board will begin hearing its first cases this week.

"Starting today, if your content is removed from Facebook or Instagram and you have exhausted your appeals with Facebook, you’ll be able to appeal your case to the Oversight Board, a global body of experts separate from Facebook that will make independent and binding decisions on the cases they choose to hear."

It is worth noting that the Oversight Board is not designed to change Facebook's policy approach, at least not specifically. The Board is designed to hear individual content cases, with its decision on each then adopted by Facebook. Facebook will consider these rulings in assessing its broader policy revisions, but it's not beholden to updating its guidelines based on Oversight Board findings. 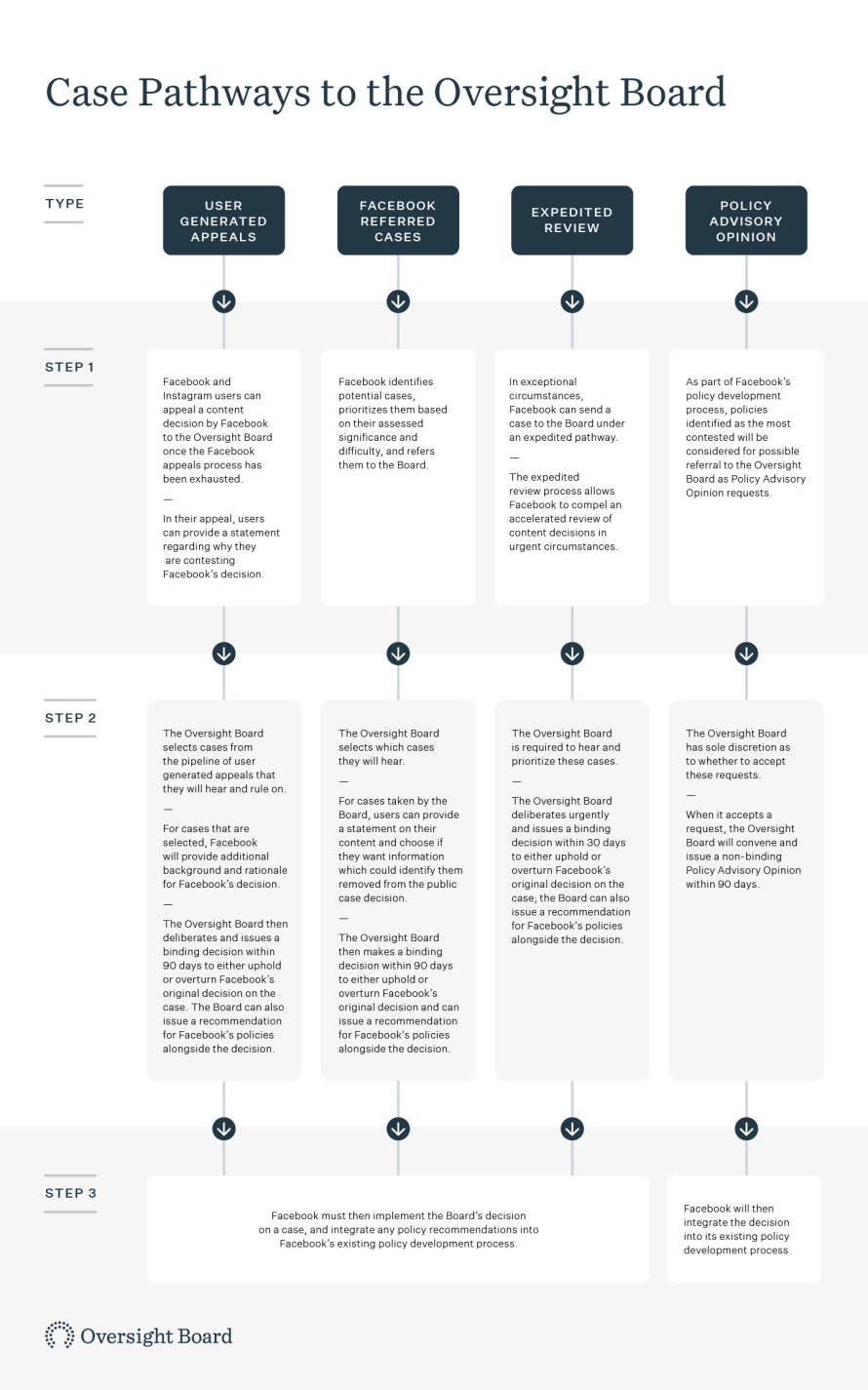 The Board essentially gives Facebook users another avenue for appeal, when they feel that Facebook has made the wrong call, reducing the onus on Facebook's internal moderation teams.

"Ultimately I don’t believe private companies like ours should be making so many important decisions about speech on our own. That’s why we’re now giving people a way to appeal our content decisions by establishing the independent Oversight Board. If someone disagrees with a decision we’ve made, they can appeal to us first, and soon they will be able to further appeal to this independent board. The board’s decision will be binding, even if I or anyone at Facebook disagrees with it."

Again, it is important to note the difference between isolated cases and Facebook's overall policies. The Oversight Board can only compel Facebook to revise its action on a case-by-case basis. As you can see in the above chart, it will also be tasked with providing advice on broader policy decisions, but Facebook will not have to implement those suggestions.

But that could be enough in many cases, as with the controversial Trump post which sparked the Facebook advertiser boycott back in July.

Civil rights groups were outraged with the comment, and the historical reference it makes, which lead to them calling on advertisers to pause their Facebook ad spend in July to send a message to the company. Those groups are still calling on Facebook to update its policies, and have thus far been disappointed with the company's response.

The Oversight Board can now step in in a case like this - and even if Facebook CEO Mark Zuckerberg strongly believes that comments from political leaders should be exempt from the platform's rules, as the people should be able to see what these elected officials have to say (and approve or disapprove of with their votes), the Board can still make its own call, which could lead to more action.

Right now, the Board envisions a 90 day turnaround time on appeals.

How much difference it will make is impossible to say. Maybe the Oversight Board, when looking at these decisions on balance, will largely agree with Facebook's logic - but maybe, the group could also significantly beef up Facebook's enforcement action, which could lead to much tighter rules around controversial speech.

We'll have to wait and see, but after a long delay, and concerns that it wouldn't be up ahead of the US election period, the Oversight Board is now in operation, adding a whole new element to Facebook's content decisions.