Facebook has announced a change to some of their ad metrics to better clarify how they’re calculated, while they’re also removing some ‘unhelpful’ metrics to help marketers stay focused on more actionable objectives.

First off, on clarification – Facebook will be adding some new labels to their metrics to highlight exactly how they’ve been calculated. 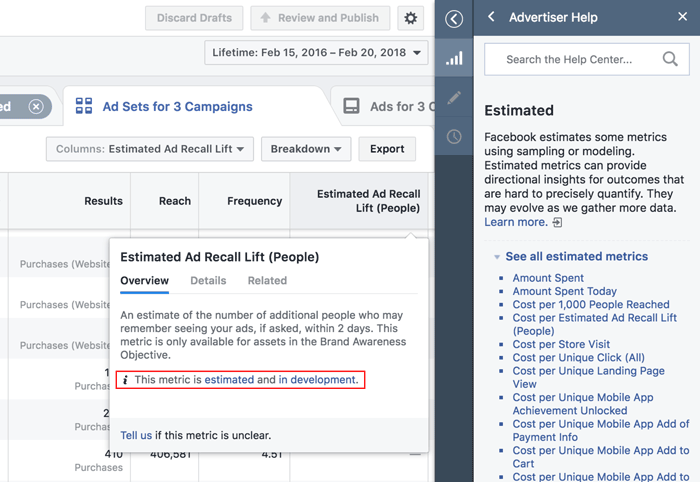 “Starting today, we’ll begin labeling some metrics in Ads Manager as ‘estimated’ or ‘in development’, to provide more clarity on how they are calculated and how you should consider using them. These labels will appear in tool tips within the Ads Manager reporting table and in the customize column selector for ads running across Facebook, Instagram and Audience Network.”

Estimated metrics are based on Facebook’s sampling or modeling, and are therefore, as noted, estimates.

“For example, reach is an estimate of the number of people who saw an ad at least once. In order for us to report reach, we analyze the number of people who see an ad multiple times, de-duplicate them and then calculate the total number of unique people in real time. To do this quickly, we sample the data and will therefore label it as estimated. This is also how reach is calculated for ads on TV and across other digital platforms.”

In other words, the metric is not going to be 100% accurate, but should be indicative. That said, how much reliance you put on this number will be down to your personal consideration – but the bottom line is that this is not designed to be definitive, it is, as noted, merely an estimate.

Of course, most advertisers were already aware of this, but the new labels will clarify things, and the above explanation provides additional context as to exactly how that final number has been established.

Those metrics labeled as ‘in development’ are generally new, and as such, will likely change as Facebook works on them.

“For example, estimated ad recall lift is a metric used by brands to understand the differences between people who can recall a brand after seeing an ad compared to those who have not seen an ad. This kind of automated measurement is still new and requires both polling and machine learning. Because we use sampling to determine this metric, it will be labeled as estimated, and since we’re still gathering advertiser feedback on it, it will also be labeled as in development.”

Again, the explanation is fairly obvious, but the new labeling tools will make it clearer, helping advertisers understand exactly what the data they’re seeing represents – and how they should apply it in their own estimates and calculations.

In addition to this, Facebook’s also looking to streamline their ad metrics by removing 18 measures which marketers have told them are ‘redundant, outdated, not actionable or infrequently used’.

“For example, the social reach metric shows the number of people who saw an ad with social information above it, such as noting a friend who also likes a certain brand. We’ve heard from you that this metric isn’t meaningfully different from the reach metric, and we know that the insight drawn from it doesn’t indicate a business outcome.”

The full list of ad metrics being removed is:

All of these, Facebook says, are measures that brands ‘can’t do anything about’, which is why they’re not overly useful - and are thus, being removed.

These metrics will no longer be available by mid-year.

In some ways, it seems odd for Facebook to be removing metrics – if a business finds value in the data, why not let them have it? But the changes are in line with Facebook’s broader effort to refine their ad offerings, in order to hone in on more meaningful business outcomes.

Back in August, Facebook removed a range of status update options (like profile picture updates) from eligibility for boosting, because they’re largely not tied to advertiser objectives. That came after Facebook COO Sheryl Sandberg noted in their Q2 earnings call that:

"Marketers of all sizes are increasingly following our best practices - like optimizing their ads to drive real-world outcomes rather than focusing on proxy metrics, such as Page likes and video views."

This re-focus has also seen Facebook add improved split-testing tools and bring Page reach data into line across both organic and paid options.

To further help advertisers get a better understanding of such changes, Facebook’s also rolling out a new education program called ‘Measure What Matters’. Set for launch in March, the program will offer training materials for advertisers focused on both brand and direct response objectives.

Refining their ad metrics will help Facebook provide more actionable, beneficial ad tools – but another motivation could be in simplifying their measures. The Social Network has come under fire in recent times for various ad metric errors – if Facebook provides fewer data points, that also leaves them less opportunity to slip-up, which could help restore faith in their data following such mistakes.

But whatever the motivation, the changes make sense, and should help marketers get a better understanding of the data points which truly reflect campaign performance, as opposed to being bogged down with too much data, and optimizing for the wrong thing.

The new labeling changes are being rolled out from today, while as noted, the redundant metrics will be removed in July.