As Facebook looks to evolve in line with user behaviors, and meet rising demand for new formats, The Social Network is experimenting with a new News Feed layout which would enable users to side-scroll through the posts in their feed, the same as how they can through Stories.

As you can see here, once a user taps into the first post, they can then side-scroll through the rest of the content in their feed, essentially switching the News Feed into its own Stories format.

But more than this, Facebook's experiment would also merge feed and Stories content into one stream. You can see in this example below (also provided by Wong) that the side-swipe takes the user from a regular feed post to a story, moving through both types in one process. 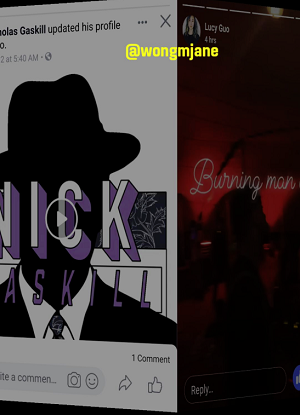 Facebook has confirmed to TechCrunch that it is experimenting with this hybrid News Feed/Stories approach, but it's also noted that it's still in the very early stages of development. According to TechCrunch, Facebook still needs to conduct a lot more user research before any public experimentation can take place - so don't expect to see it appearing in the live environment any time soon. But it certainly opens up a range of interesting considerations, and possibilities for integrated content.

Thus far, Facebook Stories hasn't really taken off, at least not in the way Facebook would like. Last September, Facebook reported that its now integrated Facebook and Messenger Stories option was being used by 300 million people daily - which is a lot, no doubt, but that only equates to less than 10% of Facebook's overall user base. That's much lower take-up than Stories see on Instagram (40% of users interact with Stories daily) and Snapchat (25% of users post to Stories daily), which likely reflects Facebook's older audience, and thus, increased resistance to newer processes.

Or, that Facebook users just aren't as interested and they don't see a place for Stories within the main app.

But Facebook's leadership definitely do see Stories as 'the future'. Early last year, Facebook CEO Mark Zuckerberg said that Stories were on track to overtake posts in the News Feed as the most common way that people share across all social apps, while more recently, Zuckerberg noted that "private messaging, ephemeral stories, and small groups are by far the fastest growing areas of online communication".

The concern here is that if Facebook Stories, at 300 million daily users, are where Facebook sees interactions headed, what does that say about News Feed engagement? Various reports have suggested that News Feed engagement, overall, is in decline - and if there are 1.5 billion daily active Facebook users, and Stories interaction is growing the fastest, despite being used by a fraction of that total count, that would suggest that the News Feed has problems, that people are, indeed, losing interest in the main feed and turning to other options.

That's why it's so important that Facebook works to re-educate users and change habitual behavior. If people are spending more time in Stories, then Facebook can use that to prop-up overall engagement and merge into the next social shift, as opposed to waiting for the News Feed to slowly dwindle out - taking ad spend with it.

Indeed, an integrated Stories/Feed approach could even enable more advertising opportunities, but in the full-screen, immersive Stories format. And then, as people get more sick of the main feed, Stories takes over, transitioning user behavior more smoothly.

Such an update would make a lot of sense - but it would also, potentially, mean a major change for Facebook. Would that upset users too much? Would it be the beginning of the end, or a necessary step in the re-alignment of Facebook with emerging trends and behaviors?

No doubt these are among the quesions being debated within Facebook HQ right now - but the fact that the test has even come this far suggests that this is very likely on its way.