Facebook is working on a new 'Auto Status' option for Messenger, which, when switched on, would use location tracking, as well as other device tools, to indicate what you're up to at any given time. 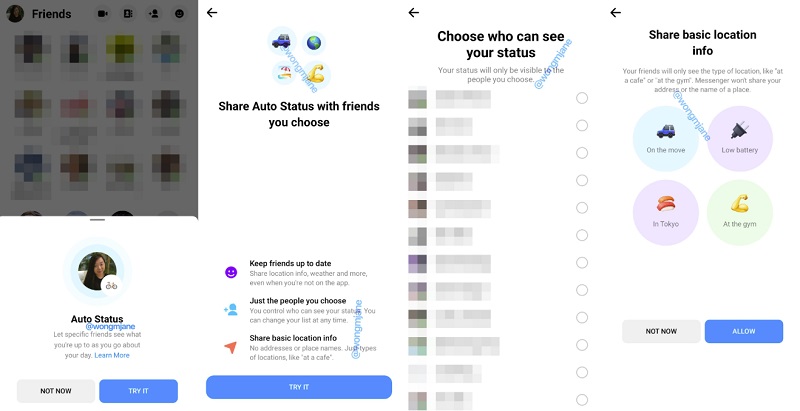 As you can see in these screenshots, posted by reverse engineering expert Jane Manchun Wong, Messenger's 'Auto Status' would use things like your location, the weather and other indicators available within your device to provide a visual representation of what you're doing at any given time. That visual would then be layered on top of your profile image in the app - you can see in the first frame that Jane's profile shot has a bike image layered on top.

Users would be able to select which Messenger contacts they want to share this information with, so it wouldn't be visible to everyone, while Auto Status notifiers would also not be location-specific - "No addresses or place names, just types of locations, like 'at a cafe'".

The visual pointers could be helpful for keeping your close connections updated as to your whereabouts - younger users, for example, might switch it on to share with their parents so that they have some idea of where they are and what they're doing, without having to call or send a message. It could also, as TechCrunch notes, serve as a prompt for meeting up in real life - if a close friend sees that you're at a cafe, he/she might get in touch and ask to join.

The functionality replicates the same option that Instagram added to its Threads app, which it launched in October last year.

Threads is designed for sharing with close friends only - research shows that some 85% of the messages shared on Instagram are distributed to the same three friends, so Instagram sought to tap into this more intimate discussion with a dedicated tool aligned to such.

Early data showed, however, that Threads wasn't catching on, with fewer users downloading the separate Threads app than those who had previously downloaded Instagram's standalone IGTV or Boomerang apps.

Still, it seems that Facebook sees potential in Auto Status, the key differentiator of Threads. Maybe, by adding the functionality to Messenger, and showcasing it to a larger audience, Auto Status will catch on and become a more relevant tool for users.

Its addition to Messenger could also suggest that Facebook is looking to bring Auto Status to Instagram's main app, and likely WhatsApp as well - with Facebook working internally towards integrating its back-end messaging infrastructure, any feature that's launched in any of its messaging apps is likely also being built to function within each of its other messaging tools.

Facebook has confirmed that it's in early testing of Auto Status for Messenger, but says it has no plans for any external rollout as yet.

Interesting tool or a little too much info? In some ways, you can imagine it will provide functional value, while in others, it could serve as a creepy reminder of just how much Facebook's apps are tracking your everyday movements.

Either way, it'll be interesting to see how Messenger users respond, if indeed it does make it to an official launch.