Facebook is adding another new feature for groups, with a new post-level analytics option which will provide more context as to how people are engaging with group updates. 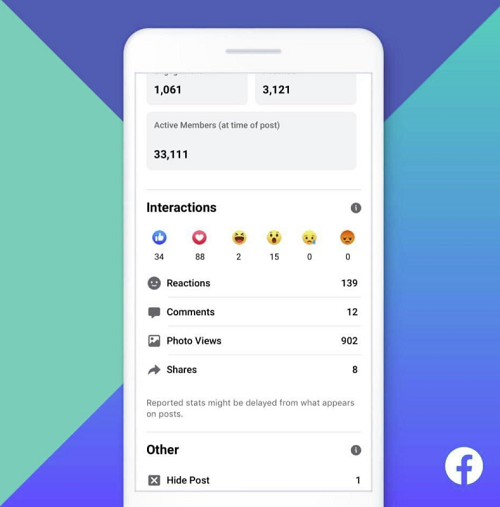 "With post-level metrics, admins can easily see the reach of a post with the unique number of people who've seen the post as well as engagement by reactions, comments, shares and clicks. Each post also shows the number of active members in the group at the time of post, a key driver of reach and engagement."

Of course, most of these you could already see - reactions, comments and shares are all displayed on each post, though not in the same way. The main additions are things like photo views, post hides and active members, which, as Facebook notes, could help to focus your engagement strategies.

But then again, Facebook's definition of an active member in this context is pretty broad:

So it's not people who were actively engaging in the group at the time you posted, its people who've been active over the last month. Which probably doesn't tell you a lot - but either way, it's another data point to consider in your posting process, and keeping track of any fluctuations in this number could help to provide more guidance on how people are responding to your updates.

You may actually have seen the new post-level analytics for groups already - social media expert Matt Navarra shared that some users had seen the option in the wild last week. Navarra also posted official confirmation of the new option today - so before you go to tell me that it's not new, that you've seen it already, yes, I know. It just wasn't official till today.

Facebook says that the option will initially be tested with a small number of groups, on all devices, over the next few months.

Groups remain a big focus for Facebook, with more people engaging in private group discussion, away from the scrutiny of the public feed. That also means that some of the more controversial content, and engagement with such, on the platform is hidden from view - last week, a leaked report from Facebook showed that it currently hosts thousands of groups and pages, with millions of members and followers, that support the QAnon conspiracy theory.

Facebook is considering what to do about QAnon specifically, but the finding does raise some questions about its broader, ongoing groups push.