Facebook's Working on a New Feature to Appeal to Younger Users

Over the last few years, Facebook has gone from 'cool app' to 'visual message board for family and friends', and with that shift, the platform has been gradually losing its appeal among younger audiences, with some reports suggesting that millions of teens are abandoning The Social Network entirely.

Facebook has, of course, tried to win back the youth - they've released Snapchat clones, group video chat apps, even, more recently, a challenger for rising short video app TikTok. But outside of Stories (which have been built into Facebook's existing apps), not a single one of these attempts has taken off in any significant way, and most have been shut down within months of launch.

But Facebook knows that the children are our future - it knows that if it wants to maintain its position as the leading social app, it needs to boost its youth appeal. Which is why it's now making another push, this time through a dedicated section within the main app that would focus on trending GIFs and memes being shared on the platform.

The name of this cool new section? 'LOL'. 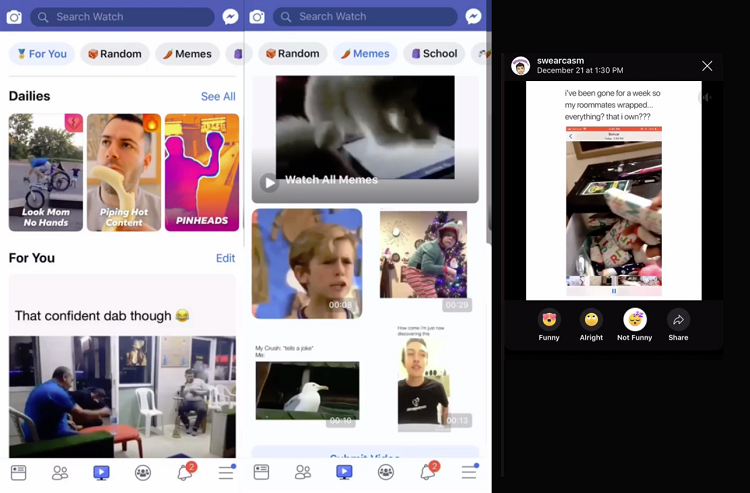 "Facebook has spent months building LOL, a special feed of funny videos and GIF-like clips. It’s divided into categories like “For You”, “Animals”, “Fails”, “Pranks” and more with content pulled from News Feed posts by top meme Pages on Facebook. LOL is currently in private beta with around 100 high school students who signed non-disclosure agreements with parental consent to do focus groups and one-on-one testing with Facebook staff."

As you can see from the above screenshots, in testing, LOL replaces the Watch tab for participating users - though TechCrunch notes that Facebook's still finalizing whether it would become a separate feature in the main app, or be given a dedicated app of its own. The latter, as noted, has not proven an effective strategy for Facebook thus far, but no doubt it has the data to inform such process.

So will it work? Will adding in a dedicated meme section help reignite youth interest in Facebook?

"Why any high schooler would log onto [Facebook] to see weeks old memes in an (adult) curated Watch-like tab is beyond me. Also, people want to see memes when they're fresh, it's not like a "Hey, watch this old meme's greatest hits".

Really, as I've noted before, Facebook would seemingly be better off looking to purchase a platform like Reddit, which is the originator of many internet trends, and leads the way through human curation, as opposed to algorithms trying to detect the next big thing.

In my personal experience, there's no better way to keep a finger on the pulse of key trends than via Reddit. Sure, Snapchat is also a key youth platform, and Instagram is a great distributor, but Reddit captures the essence of each trend as its rising, and with 330 million users, and growing, its influence continues to expand.

That's not to say that this is even possible, whether Reddit and Facebook could ever come to any such deal, only they could say. But Facebook continues to throw development dollars at new tricks and tools, new ways to try and appeal to the youth market. Reddit already does this - and as Facebook has shown with Instagram, it is possible for the company to maintain the founding ethos of a platform which it's taken over, while expanding its opportunities and reach.

I mean, that seems like a better approach than Facebook's current process - trying out another 'cool' app every six months.

And that's not to say LOL definitively won't work, either. But really, the odds seem stacked against it.

Either way, you can expect to see more about Facebook's LOL sometime in the near future. Get excited, fellow kids.

UPDATE (2/7): Recode has reported that Facebook has abandoned the LOL project and is re-structuring its youth team. Back to the drawing board for Zuck and Co.