The use of voice search is on the rise, with a report from GlobalWebIndex last year finding that some 27% of people are now using voice search on mobile in some form. In addition to this, sales of smart speaker devices, like Amazon Echo and Google Home, are set to see a 50% increase in 2019, and comScore estimates that more than 50% of all searches will be voice-based by 2020.

There's a clear shift here, and as users get more accustomed to speaking their search queries, as opposed to writing them, reliance on voice search looks only set to expand, particularly in more private settings, like in your home or car, where your voice can be clearly heard - and you're not embarrassing yourself by speaking out loud in a crowded space.

Catering to this, Google has this week announced some new updates for its voice search tools to help foster greater adoption, and expand the opportunities of voice queries.

First off, Google's adding more language variants to its voice assistant tools within its apps, so more people can use them within their regular usage flows.

"There are lots of ways the Assistant can help right within some of the apps we use every day. For example, since we launched the Assistant in Google Maps, drivers in the U.S. are getting hands-free help with directions, making calls and listening to music. We’re also seeing more than 15 times the number of queries asking for the Assistant’s help to send messages and read incoming texts out loud compared to before, when you could only use your voice for a few things. In the coming weeks, we’ll bring the Assistant to Google Maps in all Assistant phone languages."

This is where voice assistants could see major adoption, by providing an easier way to access tools while you're within private spaces. That's important to note, because it would also suggest that voice assistants are not likely to take over all search queries, but more of those 'on-the-go' type requirements which you need when your hands are occupied. That, in some ways, limits the scope of what's possible via voice assistants, but again, broader adoption in one area, like through home speaker devices, will lead to those usage habits spreading as people get used to being able to vocally ask for things, as opposed to having to type them.

Google's also making it's voice tools available on KaiOS devices, which will translate speech to text "in a natural, convenient way". Google notes that it's often difficult for people in different regions to type text messages in full, so adding in more capacity for Assistant to translate voice will help more users engage more freely.

"Last summer we announced the launch of the Google Assistant in Marathi, and said that seven more Indian languages would follow. Now, all users in India can talk to the Assistant in Marathi, Bengali, Tamil, Telugu, Gujarati, Kannada, Malayalam and Urdu. If you happen to speak one of these languages, give it a shot so we can continue improving the experience. And if you want to change your Assistant’s language on the fly, you can just say, “Ok Google, talk to me in Bengali.”

Connecting more users in India, the second most populous nation in the world, is a key opportunity for the tech giants, and providing more tools to facilitate such is a logical move.

Google's also expanding its AI assistant tools to its messaging apps, so users can get information within their messaging stream.

"If you’re chatting with your friends and you need to quickly look something up, your Assistant can help at any point when you’re using Messages. Just long press the Home button with the Messages app open on your phone, and your Assistant will pop up to help." 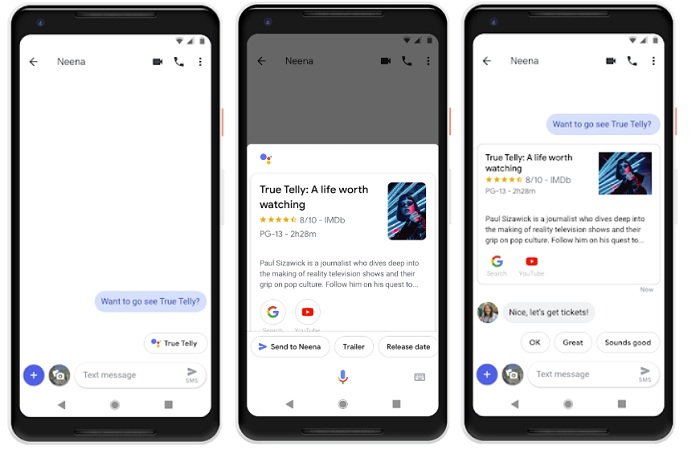 As noted, the use of voice search is rising, and these updates will help Google cater to increasing demand, while also expanding potential use cases. Voice search is likely to become a habitual behavior, so the more places Google can make it available, the better - though again, it is worth noting that voice queries are likely to be confined, somewhat, to only those searches we might do in our private spaces and when our hands are occupied. It's not likely to take over all search activity - and even the 50% estimate from comScore (noted above) seems optimistic.