Google announced a range of significant tech advances at their annual I/O developer conference this week. And while these new developments are still in their early stages, they could have major of implications – both for user discovery and consumption habits, and consequently, for digital marketers as well.

Here’s a rundown of some of the main announcements along this line from the event.

With users viewing more than five billion photos on Google Photos each day, Google's announced some new ways to edit and improve photos after they’ve been posted.

First, users will soon be able to make edits - like improving image brightness – while viewing images from their library. 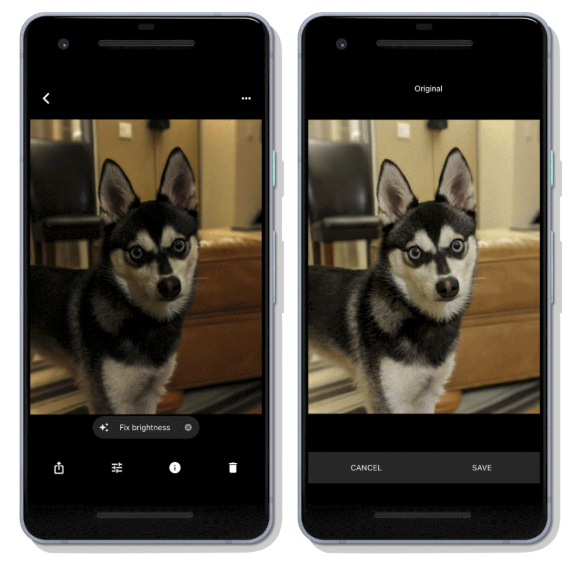 Google’s also working on a new tool which will be able to create more stand out, artistic shots based on your content.

“Starting today, you may see a new photo creation that plays with pops of color. In these creations, we use AI to detect the subject of your photo and leave them in color - including their clothing and whatever they're holding - while the background is set to black and white. You'll see these AI-powered creations in the Assistant tab of Google Photos.”

The option could be great for those looking for new ways to present their content - which they could then use to help them stand out in social apps.

Google’s also working on a simpler way for people to compose e-mails, with new ‘Smart Compose’ responses which will offer complex auto-complete suggestions as you type.

The option's geared towards users on mobile devices, making it easier to put together their messages while on the go.

Google says that Smart Compose will appear in the new Gmail for consumers, and will be made available for G Suite customers in the workplace “in the coming months”.

“To get started, make sure you’ve enabled the new Gmail by going to Settings > “Try the new Gmail.” Next, go to the general tab in your settings, scroll down and enable “experimental access.” If you want to switch back, you can always uncheck the box.”

Already, you can use Google Lens to identify real-world items, which Google is working to improve over time. In addition, soon users will be able to use Google Lens to get extra information based on text cues – say, for example, in a restaurant menu.

“This requires not just recognizing shapes of letters, but also the meaning and context behind the words. This is where all our years of language understanding in Search help.”

The capacity will make it easier for users to get more contextual information in more ways, adding to the utility of Google Lens.

But that’s not its only new trick.

No doubt Pinterest will be less than impressed by this – check out this example of Google Lens’ new ‘style match’ option.

“Now, with style match, if an outfit or home decor item catch your eye, you can open Lens and not only get info on that specific item - like reviews - but see things in a similar style that fit the look you like.”

Not only is style match exactly like Pinterest’s Lens, but it will have a lot more results to show, utilizing Google’s vast index of web-based images and products, as opposed to Pinterest’s pin catalog.

Both Lens options could have major implications for search behavior, if they catch on, and given their utility – especially in the case of style match - it would seem likely they will.

Google also announced that Lens will soon be available directly in the camera app on supported devices from LGE, Motorola, Xiaomi, Sony Mobile, HMD/Nokia, Transsion, TCL, OnePlus, BQ, Asus, and the Google Pixel, adding to its reach and utility.

But the biggest news, from a consumer tech perspective, relates to developments with Google Assistant, Google’s smart assistant tool which the company is working to expand in various ways.

First off, Google Assistant will soon be available in new voices:

“Starting today, you can choose from six new voices for your Google Assistant. And John Legend will lend his melodic tones to the Assistant later this year”

In addition to this, Google’s working to advance the capacity of Google Assistant to conduct more complex queries.

For example, soon you’ll be able to have a back-and-forth conversation with your device, without repeating “Hey Google” for each follow-up request.

“The Assistant will be able to understand when you’re talking to it versus someone else, and will respond accordingly. This feature has been one of our top requests and you’ll be able to turn on Continued Conversation in the coming weeks.”

The assistant will also be able to handle multi-part requests – so you could ask it something like “what’s the weather like in New York and in Austin?”, and Assistant will be able to understand the separate segments of the question, and respond accordingly.

But these refinements pale in comparison to this next update – take a listen to this clip:

That ‘person’ making the booking at the hair salon is actually not a person at all – that’s Google Assistant, which will soon be able to make phone calls for you.

Sounds creepy, right? Soon, if you don’t want to wait on line to be re-directed by an automated responder, or even talk to a real person, you’ll be able to ask your Assistant to do it for you.

The capacity of the option will be understandably limited to start with, and it’s only in test mode right now, but it offers a glimpse into the future of such devices.

These are just some of the tech announcements made by Google at I/O – there have also been presentations on major updates in back-end tech systems, and advanced uses of AI, including a new way for medical professionals to predict patient outcomes using AI.

Each of these updates has potentially major implications for future consumer behavior, especially since they’re coming from Google, the most used search engine in the world.

And while they’re still a way off full consumer adoption, it’s worth considering how the next wave of technology will impact your digital marketing efforts.