Back in Pinterest's early days, when it was a simply pin-board style platform where people could share their interests, Google probably didn't care, probably wasn't interested in what Pinterest had to offer. But over the years, as Pinterest has morphed into a visual discovery engine, and increasingly focused on eCommerce, Google has watched it slowly, but surely, nibbling at the edges of its core search business.

And while Pinterest is only taking up a fraction of that market (Pinterest currently stands at 367 million MAU, while Google has 2 billion MAU for G Suite alone), it is growing, and it is, indeed, taking searches away from Google.

Which is why Google has repeatedly sought to add Pinterest-like features and tools, keeping the social app at bay.

Google's latest attempt on this front is a new app called Keen, which is "a place to grow and share your interests with loved ones, and find things that will help in making this precious life count". 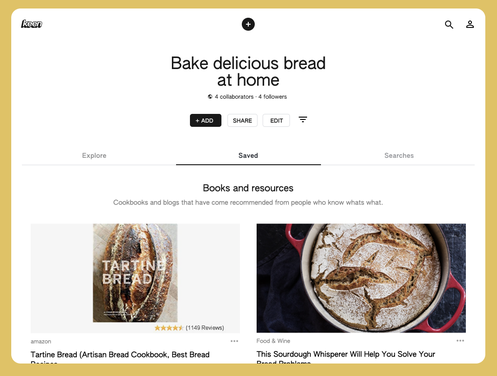 "On Keen, which is a web and Android app, you say what you want to spend more time on, and then curate content from the web and people you trust to help make that happen. You make a “keen,” which can be about any topic, whether it’s baking delicious bread at home, getting into birding or researching typography. Keen lets you curate the content you love, share your collection with others and find new content based on what you have saved."

Sounds a lot like Pinterest, right? Even down to the mention of 'delicious bread at home', which is one of the key trends Pinterest recently identified as being on the rise during COVID-19.

Yes, Keen seems very much like a Pinterest clone, which, as noted, adds to the growing list of copycat tools that Google has released as a means to at least keep Pinterest in check, and ensure that it doesn't grow too fast, and become a real problem for search. 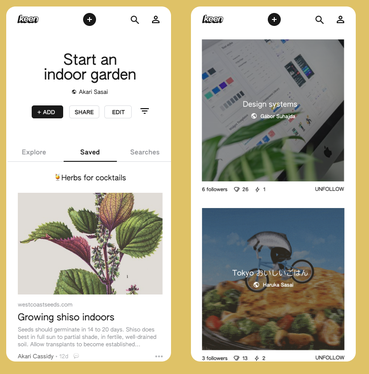 As you can see here, on Keen, you can curate collections for yourself, or for other people. Your Keens can be private or public, and expanding on your lists, once you've set-up a Keen for a certain topic or interest, Google will use its advanced search algorithms to find content similar to what you've added, highlighting other things you might want to include in your Keen. Similar to Pinterest's 'For you' listings.

"The more you save to a keen and organize it, the better the recommendations become. Even if you’re not an expert on a topic, you can start curating a keen and save a few interesting “gems” or links that you find helpful. These bits of content act like seeds and help keen discover more and more related content over time."

Will it catch on? In some ways, that doesn't really feel like the point.

I mean, of course, Google wants to attract more users in any way it can, and it wouldn't invest in developing a new app if it didn't expect to see usage. But as noted, Google has added a range of tools which replicate Pinterest's features, and while they haven't pushed them, as such, it seems like Google could further promote them, at any time, if it felt like Pinterest was gaining any real momentum.

All of these tools replicate similar in Pinterest, and if Google wanted to, it could amplify them very quickly, to its huge user base, and essentially beat Pinterest at its own game.

It could do the same with Keen. While it seems like Google will merely test the waters and see if users are interested in trying out the app, Google could push it hard, and really take the challenge to Pinterest. That almost seems like the aim of these tools - helpful in themselves, worth checking out. But also, a reminder that if Pinterest gains too much momentum, Google might just seek to crush it with its own, related functionality.

But then again, it could just be that there's an increased interest in this type of social sharing of interests and hobbies. Facebook recently released a similar app (called 'Hobbi'), and Facebook generally releases apps based on rising trends in the market, as it seeks to nullify competition before it has a chance to rise up.

Maybe, Google is simply looking to tap into the same trend, and with the advantage of its search algorithms to find related content, it could be best-placed to create an app catering to this need.

You can download the app, and see more Keens, here.