Here's the thing - for all it's technical prowess and consumer insight, for all its resources and its ability to connect people with relevant information, Google's client-facing apps have generally been pretty lacking.

Take, for example, it's app 'Uptime', released back in 2017, which enabled users to share their YouTube viewing experience with friends, and send comments and reaction emojis during playback.

It's colorful, it taps into several key trends (emojis, messaging, video, communal viewing) - technically, Uptime should have been a hit, right?

But it wasn't. Because despite technical capacity, it's not overly engaging, it's not that interesting. You could argue the same about Google+ - while Google's team is clearly able to create functional apps, which seemingly cater to audience interests, what it lacks is creative nous, the capability to take what's working elsewhere and improve upon it with new, interesting, engaging takes.

That, for the most part, leaves Google's many, many apps and experiments feeling a bit stale on release.

Which is what I find interesting about this new addition from the Big G.

"Have you ever been so overwhelmingly filled with love that it moved you to tears? Or, perhaps you’ve laughed so hard you felt sick - and wished your phone had an emoji to convey that feeling? Whether you’re sending a note to your galentines or your one true love, Gboard on Android now takes your favorite emoji and mixes them into customized stickers, helping you express those nuanced thoughts and feelings."

Google has this week released a new feature for Android called Emoji Kitchen, which provides users with new mash-ups of different emoji characters, which they can use as alternate responses.

Which is actually kind of cool, kind of interesting - exactly what Google apps generally are not.

The option enables users to explore 'recipes' of emoji variations by tapping on emojis within their Android keyboard.

"Using Gboard on your Android phone, tap on any smiley emoji and Emoji Kitchen will reveal a number of stickers specially handcrafted by the designers at Google. So when you tap the face with a cowboy hat emoji, now you have monkey cowboy, ghost cowboy, laughing cowboy, kissy cowboy, in love cowboy, pleading cowboy and of course… pensive cowboy."

Google isn't the first to do this. Popular Twitter account Emoji Mashup Bot, for example, essentially does the same thing, and it's been in operation since July last year. And as reported by The Verge, Emoji Mashup Bot has even spawned a free iMessage sticker pack, enabling users to attach its mash-up creations to their messages - so again, Google is jumping onto a rising trend.

But still, it's a pretty cool addition for Android users. 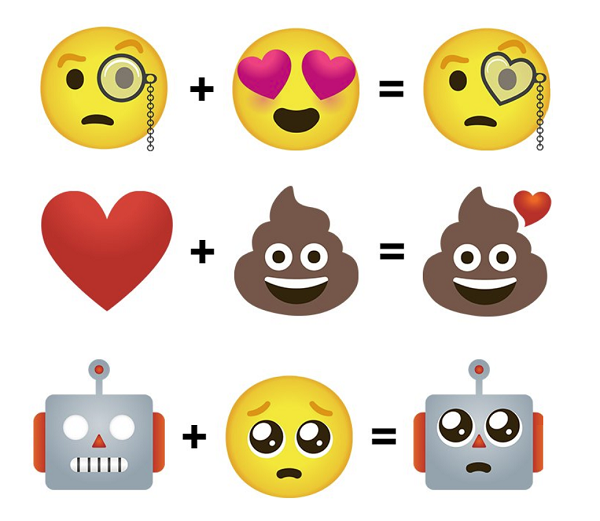 It feels like it has more to it this time, that maybe Google is getting onto it at the right time, and in the right way, as opposed to trying to get in too late. That's not to say it'll be a surefire hit - it's only available via GBoard, and as noted, there are similar alternatives around. But maybe Google's getting a bit more hip in its older age.

Or I'm getting a bit less.

Emoji Kitchen is rolling out to all Gboard users on Android, starting today.