Houseparty Offers Reward for Evidence of Smear Campaign Against the App

Like all social video apps, Houseparty is seeing a lot more attention amid the COVID-19 lockdowns, with users turning to real-time video tools to connect, in replacement of their regular social interactions.

In fact, Houseparty may be benefiting the most of all the social video apps. According to The Financial Times, the app was downloaded 2 million times last week, compared to around 130,000 in the same week a month ago. As per App Annie data, Houseparty currently ranks first in the App Store in 17 countries, and it's continuing to gain traction as people look for options to stay in touch - without actually being within touching distance. 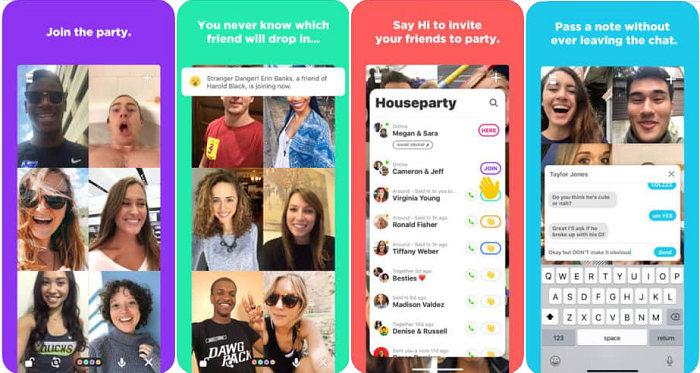 Really, this is Houseparty's moment. The app has been steadily rising for some time, providing a means for younger audiences, in particular, to virtually hang out. Houseparty has been so popular, in fact, that it even got the ultimate stamp of endorsement for a rising social app - Facebook tried to copy it with its own multi-participant video streaming app called Bonfire, which Facebook eventually shut down in May last year.

Now, through circumstances being as they are, Houseparty has a key opportunity to solidify its audience, and maximize its opportunity. Except, it's hit an odd speed bump in its progress - and it's calling foul on dirty tactics by an unknown competitor.

Over the past few days, a range of posts and tweets like these have been showing up online: 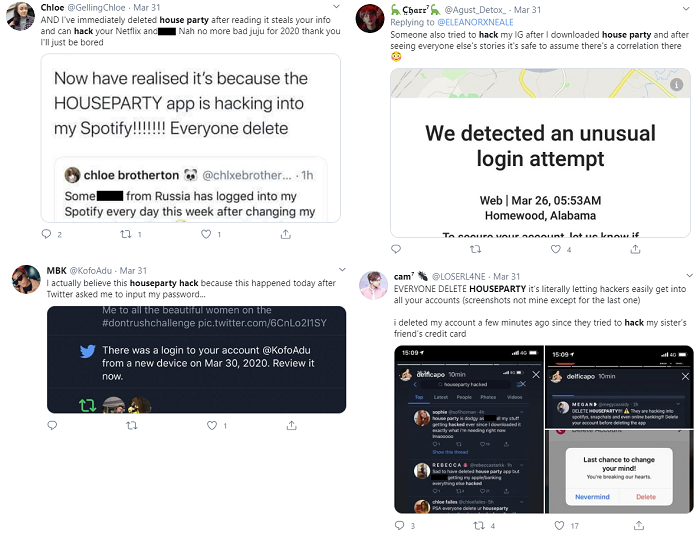 Various people who've downloaded the app claim that they've since had their Instagram, Spotify, Netflix and eBay accounts hacked as a result of data they've seemingly entered into Houseparty.

Except, that's not really possible - as clarified by Houseparty:

All Houseparty accounts are safe - the service is secure, has never been compromised, and doesn’t collect passwords for other sites.

The same as any other app, Houseparty doesn't collect your passwords for other accounts and apps, so how it would be facilitating widespread hacks is a bit of a mystery.

But the rumors are clearly having an impact - after the story was reported on by several tabloids in the UK, resulting downturn in users, Houseparty has responded, offering a reward for anyone who can provide evidence of a coordinated smear campaign against the app.

We are investigating indications that the recent hacking rumors were spread by a paid commercial smear campaign to harm Houseparty. We are offering a $1,000,000 bounty for the first individual to provide proof of such a campaign to [email protected]

It may be the first time a prominent social app has publicly offered a bounty for such purpose. But again, it does seem odd, Houseparty is no more able to compromise the security of your accounts on other apps as any other social tool. Unless, somehow, it were to be exposing your email and password information to hackers, and you were then using the exact same email and password for Houseparty. There's no evidence that Houseparty's systems have been hacked in this way - and again, it would be reliant on people using the exact same information, even if that were the case.

If it is found to be a 'commercial smear campaign', as Houseparty suggests, that would be a significant concern - if opponents are able to limit the growth of competitors via rumor-led social media efforts, that would be a new element for regulators to consider, and a new avenue that would require further examination by legal authorities. But then again, various political campaigns have reportedly utilized the same tactics - and while it's not as well-known, it's likely that other tech companies have also used this in the past to impact their competition.

It's a concerning development, but it once again underlines the influence of social platforms, and the ways in which the discussion can potentially be swung by bad actors - if, indeed, that is found to be the case in this instance.