With #BlackLivesMatter protests being held in various cities across the US, in response to the death of George Floyd at the hands of Minneapolis police, social media platforms have also been adding their support to the cause.

Here's what we've seen from each of the major companies.

First off, Twitter has provided a range of resources and tips to help people get a better understanding of the situation, and the part that they can play in making a change (tap through on this tweet for the full thread).

Racism does not adhere to social distancing.

Amid the already growing fear and uncertainty around the pandemic, this week has again brought attention to something perhaps more pervasive: the long-standing racism and injustices faced by Black and Brown people on a daily basis. ???? pic.twitter.com/8zKPlDnacY

Twitter has also updated its main profile to reflect its support for the protests. 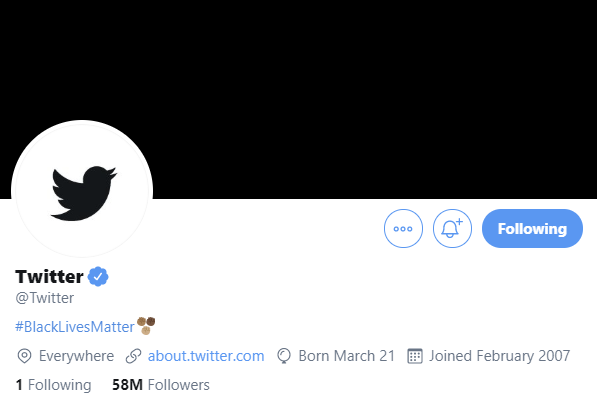 $3mm to Colin @Kaepernick7’s @yourrightscamp to advance the liberation and well-being of Black and Brown communities through education, self-empowerment, mass-mobilization to elevate the next generation of change leaders. https://t.co/WGgKziHnwB

Twitter has also published a guide to allyship which outlines how people can learn more about racial injustice, and what they can do to improve the situation.

LinkedIn, meanwhile, has also voiced its support for those calling for change.

Being a strong ally begins with listening, so we are sharing stories to amplify perspectives from the Black community. https://t.co/NlZWOf5AZ6 pic.twitter.com/VBRdw4K1qE

LinkedIn has also made a series of LinkedIn Learning courses on diversity and inclusion available for free as it seeks to contribute to broader education on these key elements.

YouTube has also added its support, while additionally pledging $1 million in funding to support organizations seeking to address injustice.

We stand in solidarity against racism and violence. When members of our community hurt, we all hurt. We’re pledging $1M in support of efforts to address social injustice.

Over on TikTok, the trending video platform has posted an update on its efforts to fix a glitch which saw posts uploaded using the hashtags#BlackLivesMatter and #GeorgeFloyd receive 0 views, according to the counter. This was a technical problem - those videos were being viewed and TikTok has assured users it was not, in any way, seeking to suppress any related discussion.

TikTok says that #BlackLivesMatter videos have accumulated over 2 billion views on the platform thus far.

"We fully acknowledge our responsibility to not simply wish for and talk about the importance of diversity on our platform, but to actively promote and protect it. We share in the pain our country is in, and it is palpable across our TikTok communities. We stand shoulder to shoulder with the Black community and, as we write this, our teams are working on ways to elevate and support Black voices and causes."

TikTok has also committed to establishing a new creator diversity council, while it's allocating $3 million from its $250 million COVID-19 relief fund to non-profits that help the Black community, "which has been disproportionately affected by the effects of the COVID-19 pandemic".

"In addition, we are committing another $1 million toward fighting the racial injustice and inequality that we are witnessing in this country. This is just a first step, and we will further develop our ongoing efforts in this space as we work to support underrepresented groups as a whole.

"This is not a day off, but a day of action. There will be no playlists or campaigns on TikTok's Sounds page today out of respect for the movement. The effect that Black music, artists, and creators have on TikTok is undeniable. TikTok is proud to be a platform and community where Black music thrives, talent is discovered, and creativity flourishes."

Incoming TikTok CEO Kevin Mayer has also shared his thoughts on the protests, his first official comments as CEO:

To our community, a message from our CEO...

Facebook CEO Mark Zuckerberg, meanwhile, has posted a personal update to outline his reflections on the protests.

The pain of the last week reminds us how far our country has to go to give every person the freedom to live with dignity...

Within his various notes, Zuckerberg discusses the Chan Zuckerberg Initiative's ongoing support of programs focused on overcoming racial injustice, while Zuckerberg has also pledged a further $10 million in funding for groups working on the same.

Facebook has also posted this update on its official profile:

Both Facebook and Instagram have also switched all of their official profiles to black and white colors in support.

#ShareBlackStories.⁣ We hear you, we see you and we are with you.⁣ ⁣ We stand against racism. We stand with our Black community — and all those working toward justice in honor of George Floyd, Breonna Taylor, Ahmaud Arbery and far too many others whose names will not be forgotten.⁣ ⁣ Time and time again, we have seen that the Instagram community has the power to bring about meaningful change. The more we #ShareBlackStories, the more we raise voices that make a lasting impact. To continue that impact, @facebook is pledging $10 million to efforts committed to ending racial injustice. #BlackLivesMatter.⁣ ⁣ ❤️

We stand against racism, and in solidarity with the Black community. Let’s amplify the voice of Black people, and fight systemic inequality in our world. #ShareBlackStories

And Instagram chief Adam Mosseri, who has just recently returned from paternity leave, has also posted an impassioned response to the situation on his profile.

People are angry right now, and the have a right to be. I'm focused on how we can channel that energy into positive change over the long run.

Snapchat CEO Evan Spiegel, meanwhile, has shared his response with his staff via an internal memo, in which Spiegel said that he was “heartbroken and enraged” by the ongoing battle against racism in the US.

As first reported by The Information, Spiegel has also called for the creation of an American commission to address racial injustice, and comprehensive tax reform, providing concrete options for a way forward from the current situation.

As explained by Spiegel:

"Some of you have asked about whether Snap will contribute to organizations that support equality and justice. The answer is yes. But in my experience, philanthropy is simply unable to make more than a dent in the grave injustices we face. While our family has and will continue to contribute meaningfully to create opportunity for the underprivileged, and donate to the guardians of justice, these circumstances call for a more radical reorganization of our society. Private philanthropy can patch holes, or accelerate progress, but it alone cannot cross the deep and wide chasm of injustice. We must cross that chasm together as a united nation. United in the striving for freedom, equality, and justice for all."

We condemn racism. We must embrace profound change. It starts with advocating for creating more opportunity, and for living the American values of freedom, equality and justice for all.

Pinterest has outlined how it's working to respond to the call for more action on improving racial inequality, with measures that include elevating content on racial justice, "such as resources for how parents can talk to their children", highlighting organizations that users can support, and providing educational information about systemic racism in America.

Pinterest is also donating 25k shares of stock (currently valued at roughly $500,000) to "organizations committed to racial justice and promoting tolerance". Pinterest has additionally committed $250,000 to help rebuild local businesses damaged in the protests, and will provide a further $750,000 in paid media to organizations that support racial justice.

"With everything we do, we will make it clear that our black employees matter, black Pinners and creators matter, and Black Lives Matter. "

We want to express not only our solidarity but also our commitment to taking action. Read the note from Ben, our CEO: https://t.co/qH46u0WU65 pic.twitter.com/AZ31kb3BJZ

We’re using our platform to amplify and celebrate Black creators in our community and beyond—from the fashion experts and home interior designers, to the fitness gurus and DIY lovers, the recipe developers, bloggers, and artists. ⁣ ⁣ Swipe left for 8 creators who inspire us—then head to the link in our bio to follow and support. #BlackLivesMatter

And Reddit co-founder Alexis Ohanian has resigned from the Reddit board, while also urging the Board to replace him with a black candidate. Ohanian says that he will use future gains on his Reddit stock to serve the black community, beginning with a $1M to Colin Kaepernick's 'Know Your Rights' initiative.

"I’m saying this as a father who needs to be able to answer his black daughter when she asks: “What did you do?”

In the broader tech sphere, Google has also allocated $12 million in funding to organizations working to address racial inequities.

As per Google CEO Sundar Pichai:

"Our first grants of $1 million each will go to our long-term partners at the Center for Policing Equity and the Equal Justice Initiative. And we’ll be providing technical support through our Google.org Fellows program. This builds on the $32 million we have donated to racial justice over the past five years. We’ll also offer $25 million in Ad Grants to help organizations fighting racial injustice provide critical information."

Google will also match an additional $2.5 million in donations raised via an internal campaign.

"This represents the largest Googler giving campaign in our company’s history, with both the largest amount raised by employees and the broadest participation."

Apple CEO Tim Cook has also shared his support, and concerns, in an internal memo to employees. In that same memo, Cook pledged to match donations from employees to organizations seeking to address race-based injustice.

"The Apple executive said that the company would be donating to a number of groups, including the Equal Justice Initiative, a non-profit focusing on racial injustice. The iPhone maker will also offer a two-for-one match for employee donations in the month of June."

Cook also posted this public statement on the situation, and how Apple will look to improve going forward.

Microsoft CEO Satya Nadella has also called for change, while underlining the company's work with the Criminal Justice Reform Initiative. Microsoft is also using its social media profiles to highlight perspectives from black employees at the company.

There is no place for hate and racism in our society. Empathy and shared understanding are a start, but we must do more. I stand with the Black and African American community and we are committed to building on this work in our company and in our communities. https://t.co/WaEuhRqBho

SEO tech platform Moz has also published a post outlining its support for the #BlackLivesMatter movement.

We'll update this post with more info on social media and tech sector responses as they come in.