Instagram says that this type of prompt has shown positive results, and now, as we head into the holiday break, Instagram is expanding the same to post captions, which will now also come under scrutiny from Instagram's anti-bullying detection AI. 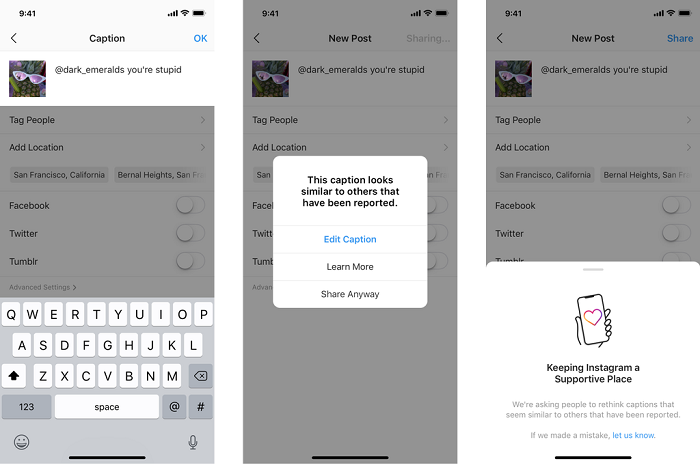 "Today, when someone writes a caption for a feed post, and our AI detects the caption as potentially offensive, they will receive a prompt informing them that their caption is similar to those reported for bullying. They will have the opportunity to edit their caption before it’s posted."

As you can see in the above example, the new process adds an extra step to the detection and alert model, with a prompt noting that similar captions have previously been reported. The process won't stop users from including their potentially offensive caption anyway, but it's another measure to get users to take a moment to consider the consequences of their actions, and what they may be sharing.

Instagram doesn't provide specifics on how, exactly, its existing comment warnings have helped, but in Facebook's most recent Transparency Report, it noted that:

"Content actioned increased from 2.5 million pieces of content in Q2 2019 to 3.2 million in Q3 2019, as we strengthened our enforcement of our policy on bullying and harassment."

Facebook doesn't provide information on bullying and harassment enforcement for Instagram specifically, but as Instagram notes, its combined measures - which would also include hiding like counts and adding new elements like 'Restrict' - are having an impact, based on its metrics for such.

Without insight into exactly what those metrics are, we'll have to take their word for it, but clearly, user safety, and ensuring that Instagram is a platform where all users feel safe to express themselves is a key focus under new chief Adam Mosseri.

The new caption warning prompts will be rolling out in select countries, and will expand globally in the coming months.