Instagram Explains How Its Algorithm Works in New Briefing

Instagram has provided some more insight into how its feed algorithm works, as the platform seeks to better ingratiate itself with its community – both of users and brands – and provide more transparency into their process.

Instagram first outlined some of the details of how its algorithm works at a Scale event last year, but this week, the Facebook-owned company brought in a collection of tech journalists and went through, in more specific detail, how their system goes about sorting content - and how that’s benefiting users.

First off, Instagram’s algorithm takes into account three main factors, which weight the system more than anything else.

Those three elements are:

These elements are all fairly well known, and are very similar to the factors Facebook takes into account with the News Feed algorithm – but the image recognition element does add something interesting.

Facebook’s been working on its image-recognition tools for some time, and they are getting much better at determining specific objects within still images – so much so that you can now search on Facebook based on image content.

There’s still a way to go on this, but Instagram seems like the perfect home for such tools, with the visual nature of the platform better lending itself to image search. The fact that this is already being factored into the algorithm is very interesting, and it may also play into Instagram’s revised Explore layout, which organizes content into topic channels. 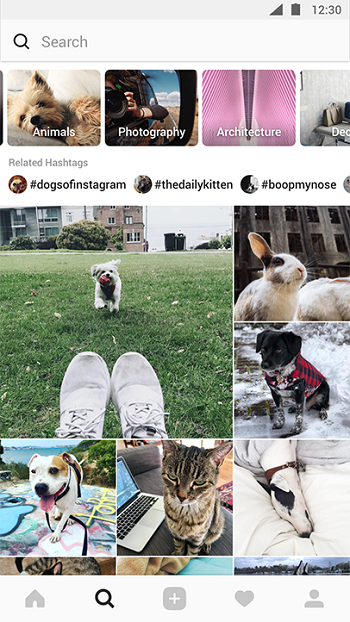 You can imagine how image search would fit into that process – instead of referencing hashtags, Instagram could also use image content to help them highlight more of the content you’re likely to be interested in.

The development potentially points to the next evolution of Instagram’s algorithm system, which would put much more emphasis on what’s actually in each image, as opposed to the tags you use or the captions. That makes sense – if you check out a lot of beach photos, you’re likely going to want to see more, and while the system may not be able to determine these from the text elements alone, visual cross-referencing could get them.

For marketers, this could lead to a significant shift in how you go about posting in order to reach your target audience.

In addition to this, Instagram has also sought to clarify a few common algorithm myths:

And while many Instagram users were not happy when the platform introduced an algorithm-defined feed, the user data speaks for itself. Before the introduction of the algorithm, users were spending around 21 minutes per day in the app, but since its implementation, that’s risen to 24 minutes per day, on average, per user.

Now, that might not seem like much on balance, but when you consider that Instagram has 800 million active users, three minutes each is a lot more engaged time - and a lot more opportunity for Instagram to monetize those users with ads.

But more than this, Instagram users under the age of 25 are now spending more than 32 minutes per day in the app. That’s been helped by the introduction of Stories, but still, the usage data shows that the algorithm approach has worked – and Instagram has now also revealed another stat underlining their strategy.

According to internal data, under the chronological sorting system, users were missing around 70% of posts from the profiles they followed, and 50% of their friends’ posts. Instagram says that users are now seeing 90% of their friends’ posts – and when you also consider that 85% of people's Direct messages on Instagram go to the same three friends, it’s clear that intimacy, and connection with those you know on the platform is important.

This is the difficult balance of algorithms. While computer sorting systems may not be as good as real humans at detecting true relevance, or uncovering the best new content, they are very good at taking signals (who you interact with) and using them to show you more from those specific people and profiles. Really, it’s a fairly basic equation – and while some users may not like the way the system picks and chooses what you see, as highlighted by these figures, it works. It makes perfect sense that all the major platforms are looking to implement similar.