Last November, Instagram added a new functionality called 'Reels' to its app, made available only to users in Brazil, which largely replicates the key features of TikTok.

As you can see here, the Reels video mode enables you to create 15-second, looping video clips, which can be set to music, and spliced together from various clips. Your Reels can then be shared and remixed, just like TikTok, while top Reels are also featured in Explore, improving discovery.

We haven't heard anything about the option for the last six months, but this week, Instagram has announced that it's expanding Reels to users in France and Germany, and adding some new features.

As per TechCrunch, Instagram will now enable users to share Reels to their main Instagram feed, in addition to Stories, while Reels will also have a dedicated space on user profiles, and in the Explore tab (you can see Reels in Explore in the second screenshot above).

That could help expand the usage of Reels, and make it a more popular content option.

So why is it only being expanded to users in France and Germany?

It could be part of Facebook's strategy to quell TikTok before it has a chance to gain significant market share - according to a leaked pitch deck, which Digiday published early last year, TikTok, at that time, only had around 4 million users in both markets. 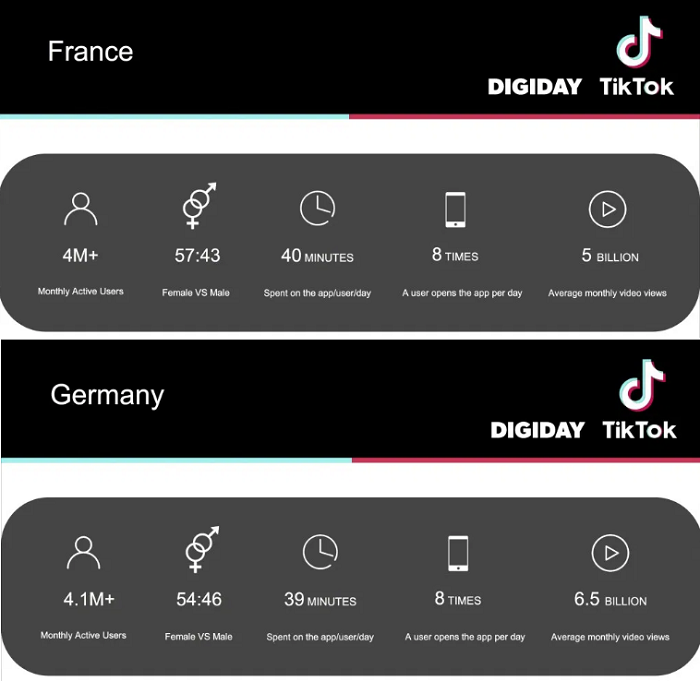 For comparison, Instagram has 22 million users in Germany, and 19 million users in France. TikTok's likely gained more users since this listing was shared, but it would still be a long way off taking hold the way it has in the US, where the short video app has around 27 million users.

By adding TikTok-like tools to Instagram in these markets, Facebook may be able to stop TikTok from gaining momentum, instead keeping users more aligned to Instagram. And with new functionality added which enables broader sharing of Reels, and puts specific emphasis on Reels clips as an alternative feed of sorts, it could be that high-profile users who may have considered migrating to TikTok will stick with Instagram instead - where they can not only maximize reach, but can also earn money from their on-platform efforts.

The new Reels features are interesting, and it'll be equally interesting to see if Instagram decides to bring Reels to more new markets. The US and India are the key focus regions for TikTok (outside of China), so it may be that Instagram will look to bring Reels to users everywhere else first, again, as part of a broader strategy to slow TikTok's momentum.

And looking at how these new Reels elements function, that strategy might just work.

If nothing else, it'll be interesting to see if the introduction of Reels slows the growth of TikTok in these regions.