It what will likely come as little surprise, Instagram has launched a new feature which aims to replicate the key functionality of rising app TikTok. But rather than taking on parent-company Facebook's usual tactic of launching a separate app, Instagram is adding its new 'Reels' feature as an element within Instagram Stories, using the app's scale to try and beat TikTok at its own game - and blunt its potential to take away younger users.

As you can see in the video, Reels will enable users to create short videos which can be shared and remixed - just like TikTok. Those videos can include music, utilizing Facebook's expanding music library, while Reels also includes a range of creative editing options, like variable playback speed and 'ghosting' which enables users to create more seamless scene transitions.

The new mode, which will initially only be available to users in Brazil, will be available within the Stories Camera.

While Instagram will look to feature Reels content in a new 'Top Reels' section in Explore, adding to the discoverability of the tool. 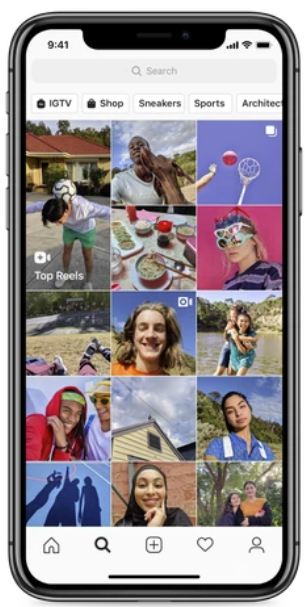 "I think Musically before TikTok, and TikTok deserve a ton of credit for popularizing this format."

Which is a bit of a strange statement - it almost seems to suggest that TikTok copied Muscially as a way to lessen Instagram's own replication.

Regardless, Instagram's TikTok clone, which has been in the works for months, is now here - Facebook's clearly taking the rise of TikTok seriously, and its taking steps to negate it.

But will that work? There's actually quite a bit to consider on that particular front.

After Facebook crossed a key threshold by directly copying Snapchat's Stories feature, it seemed that all bets were off, that all social apps started copying others in an attempt to fend off competition. Initially, it was a surprise to see Facebook so blatantly rip-off another app's idea, but since then, we've seen various other platforms copy Stories, Reactions, live-streaming. After Instagram Stories, duplication became a much more viable, even acceptable strategy within the sector.

Of course, it always was to a degree, but the Instagram Stories announcement seemed to push it over the edge.

It's become so common, in fact, that these days, when a new social app or tool starts to gain momentum, you pretty much expect Facebook to be working on its clone version.

But then again, most of Facebook's clones haven't worked - take, for example:

And this is only a sample - Facebook, which knows all too well that a fresh, new app can relegate the incumbent to the bench, is always looking at new ways to stay in touch with the latest trends, and slow the momentum of any competitor who rises up in its path.

Facebook's learned to use its massive, global scale to facilitate such - its key tactic is to create alternative apps or functions, and then roll them out in regions where these rising apps have not yet been able to take hold. If Facebook's able to get in first, that can nullify their potential, and enable Facebook to maintain its position by launching what would appear to be industry-leading new features. When often they've just been duplicated from other apps.

It seems questionable, it seems like a cheap, anti-competitive tactic designed to stifle all forms of competition. But it works. Facebook's continues to add more users and grow its empire, while it's also on track to rake in $70 billion in revenue in 2019. It's easy to point at Facebook's previous failures, or to criticize it for blatantly replicating its competition. But Facebook slowed Snapchat's growth to a crawl, which that company is only now recovering from, and it may well do the same with TikTok. If, of course, TikTok is even able to maintain its growth momentum.

Is that good for the digital industry overall? Will that mean we see less innovation and competition in the sector? That, at least in part, is why some have called for Facebook to be broken up, and why Facebook has been subject to various antitrust investigations and queries. Eventually, if Facebook can continue on this path, it could be the only social media option we have left - just Facebook in different forms.

In some ways that seems far-fetched. In others, it feels too close for comfort. But either way, what you can expect is that Facebook will continue to stomp on potential competitors. And given its ever-increasing scale, it may just squash them all into oblivion.