Over the last few weeks, amid escalating tensions in Palestine, various Instagram users have noted that their posts are not being seen in the app, which some have equated to a form of censorship, implying that Instagram has been deliberately seeking to limit pro-Palestinian voices in the app. Among those who've raised concerns on this front have been celebrities like Mia Khalifa and Bella Hadid

Instagram has strongly denied any form of censorship in this respect, but it has identified a problem impacting the reach of such content - a recent algorithm change to reduce the reach of feed posts that have been re-shared to Stories.

As reported by BBC:

"The app had favored original content in its "stories" feature over existing, re-shared posts, but will now give them equal treatment, it said."

As noted, Instagram has been testing various ways to stop feed post re-sharing in Stories, even going so far as to remove the option entirely for some users.

Instagram recently further expanded on this, explaining that users often have so many Stories in their top of feed display that they can't get to them all every day, which is why prioritizing original posts makes sense, ensuring users see the most relevant, unique updates, as opposed to replicated content from their main feed.

Which makes some sense, but it's now lead to an unwanted side-effect.

"[The change has] caused people to believe we were suppressing stories about particular topics or points of view. We want to be really clear - this isn't the case. This applied to any post that's re-shared in stories, no matter what it's about."

Wanted to provide a bit more information on what happened here. We are so sorry to everyone who was impacted by this. https://t.co/BFxyJfRbSR pic.twitter.com/3J9YGyRYdS

So while Instagram's intention has been to improve the Stories experience, and stop users simply seeing a duplication of their main feed within Stories, it's also, unwittingly, ended up reducing the reach of posts around important events and issues. So now, Instagram is rolling back that change, which will ensure that re-shared feed posts continue to get the same amount of reach as any other Stories content.

For now, at least.

While Instagram has taken a step back in this specific instance, it will no doubt keep looking for ways to stop people re-sharing feed posts to their Stories, because as Instagram CEO Adam Mosseri has previously noted, it's very clearly a prominent pain point for the app. 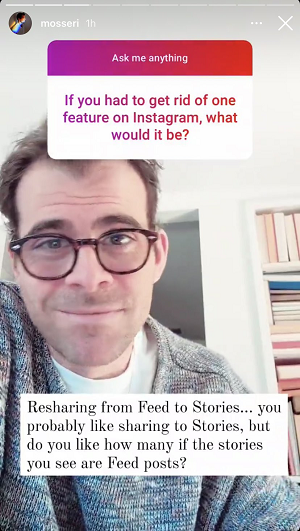 Instagram's already experimenting with new tags for feed posts when they're shared to Stories, and new Stories stickers for reshares, making them more prominent. Somewhere in amongst these experiments, there may be a solution, but right now, Instagram hasn't got the balance right, with algorithmic penalties probably not likely, given that there's no automated content detection that could ensure it's not also inadvertently silencing user voices.

It'll be interesting, too, to see whether similar concerns apply to Reels, with reach restrictions now in place for posts that include 'word marks', in an effort to limit the re-sharing of TikTok clips.

Yup, attaching a word mark to a video will mean, on average, it gets less reach. People complained a lot in the early days that they were a poor experience.

It remains a sticking point for the platform, but the solution is not clear. But maybe, it will come up with another option, and limit the reach of re-shared feed posts in Stories sometime soon.