Instagram has released a new update for its separate IGTV app, which aims to put more emphasis on top creators, who are key to maximizing engagement with the video platform. 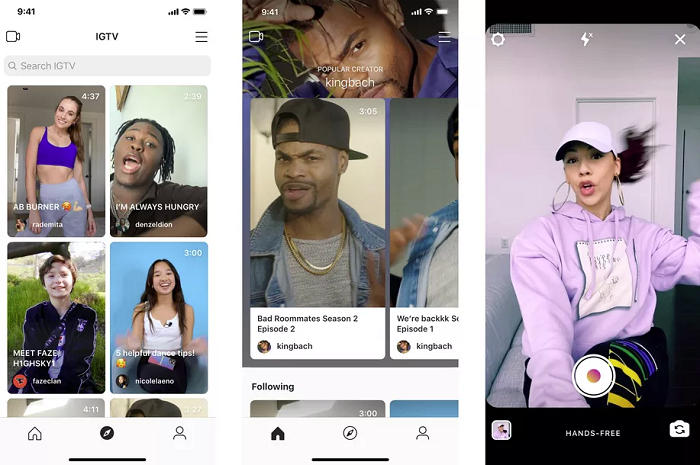 The main aesthetic change is the homepage - as you can see in the middle frame above, the IGTV home screen will now feature a popular creator up at the top, in a sort of showcase frame. The creator highlighted to you will be based on your usage - and as you can see, the banner image is fairly prominent, which should encourage more viewing of top creator content.

That's an important element for IGTV - as many video platforms have found before, if you can't keep top creators around, you won't last for long. Vine eventually died out after its big names started to migrate to YouTube - and, interestingly, Instagram - while TikTok is now working to incorporate more monetization options for influencers in order to provide more revenue potential, and keep them posting.

Instagram's main app, of course, does hold significant appeal for top influencers, but IGTV itself hasn't yet taken off as a key platform. If Instagram can drive more traffic, and revenue potential, for creators via IGTV, that could play a big role in making it a more relevant option - and worth noting, Instagram also launched the first stage of IGTV monetization for top creators just last month. 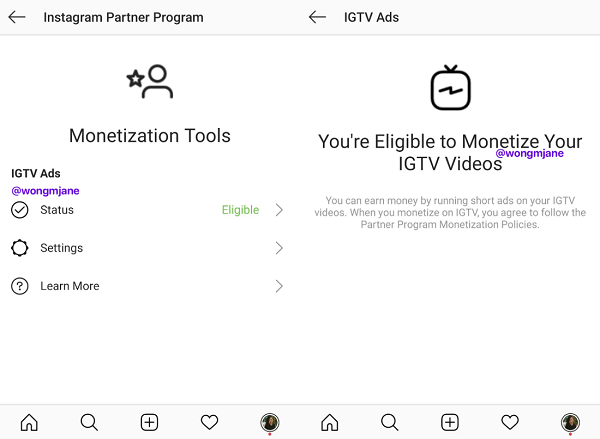 In addition to the home page redesign, Instagram's also adding a new Discover tab (first frame in the top image set), providing a more specific way for users to navigate the app, and likely highlight top creators once again. Up till now, your IGTV search options have been limited, and largely defined by content you've already engaged with, but a new Explore option could help to boost discovery by giving users more specific control over what they see.

For reference, these are the current IGTV discovery options: 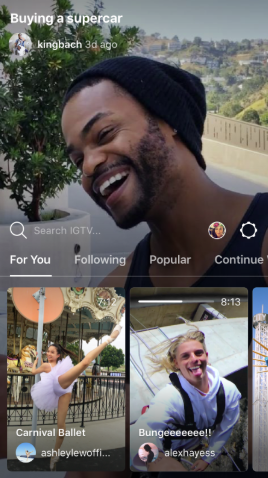 "Tap the video icon on the top left corner to create and upload videos on IGTV instantly."

And it's also adding an important, cross-promotional update - now, when an IGTV creator posts a link to their IGTV video in their Instagram Story, the first 15 seconds of the video will play, with a 'swipe up' link to see the rest, as opposed to the current freeze-frame from the IGTV clip.

The changes, as noted, align with the shift towards the next stage for IGTV, in terms of monetization and expansion - though how useful they'll be is difficult to say, as Instagram hasn't reported how many people are actually using the separate IGTV app.

Despite a hyped launch, IGTV has never really seemed to take hold with users, with data from App Annie showing that it's currently not even in the top 1,000 apps on the App Store in the US. Earlier this year, TechCrunch reported that, "at most, 7 million of Instagram’s 1 billion-plus users have downloaded its standalone IGTV app in the 18 months since launch", a poor result for a platform that Instagram had high hopes for. But yet, this new push does suggest that they do see potential in it. There could still be life in IGTV yet,

The key, as noted, is to boost appeal with top creators, and give them a more defined path to make money from the platform. With a monetization process in play, that will further incentivize IGTV posting, which could still bring more users across to the app. What motivation they'll have to download the separate IGTV app, as opposed to simply watching IGTV content through the main Instagram app, is hard to say, but right now, with digital viewers at an all-time high, it seems to be the best time for IGTV to stake its claim, and for Instagram to make a bigger push to get people to use the option.

Will that work? Definitely, the one-two punch of increased promotion of top creators along with new monetization options will have many influencers giving it another look - and if they start posting exclusive IGTV content, and bringing across their audiences, that could see a major boost for the option.

It could still happen. Despite relatively slow take-up, and limited interest thus far, IGTV could still become a thing.

Worth taking note, and seeing what comes next for Instagram's video showcase platform.

NOTE: The new IGTV previews in Stories don't use the 'Swipe Up' functionality as noted above, but actually display a tag in the frame, similar to Shopping Tags - example below.

Today we're launching something exciting to increase discoverability of your videos. ✨ You can now create a Preview for your IGTV video in Stories! ???? It will autoplay the first 15 secs of your video, AND if it's viewed for more than 3 seconds, the view will count towards your total IGTV view count. ????

UPDATE (4/20): In another element of the broader IGTV push, Instagram is also adding a new option to easily upload the video of your Instagram Live streams to IGTV after completion of the broadcast.

*Bonus*
- Instagram is also testing a way for people to easily save Live videos straight to IGTV so they stick around longer than the 24-hour limit in Stories pic.twitter.com/8V1dxXComz