Instagram Users Call for the App to Stop Trying to Be Like TikTok, with Kylie Jenner Joining the Push

This is probably not ideal for Instagram, and its new approach to content sorting, as it seeks to keep up with the roaring success of TikTok.

As you may recall, earlier this year, Meta CEO Mark Zuckerberg flagged coming changes in approach in how it sorts content within user feeds, with a shift away from your home feed being curated by your social or follow graph, to more of the posts displayed being recommended by AI, ‘even if the content wasn’t posted by a friend or someone you follow’.

That change has been most evident on Instagram, where more and more of your main feed is now being dominated by posts – primarily short-form video clips – from profiles that you don’t follow, which has made it harder to keep up with the content from those that you’ve actually chosen to follow in the app.

That approach has been a big hit for TikTok, in broadening the amount of engaging content that it can show to users to keep them scrolling. But many Instagram users are less than satisfied with the new experience, with almost 100,000 of them signing a new Change.org petition calling for Instagram to go back to how it was. 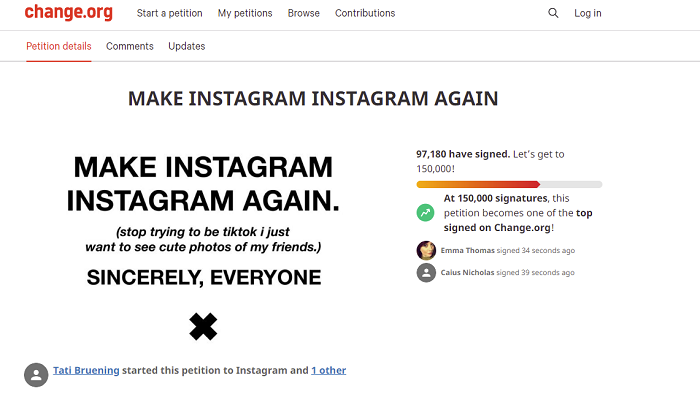 The petition was launched by influencer and photographer Tati Bruening, who wants the app to get back to its roots of photo sharing.

And one particularly influential voice has now also added her voice to those calls.

Kylie Jenner is one of the most influential voices among younger users, with over 360 million followers on IG alone. When she talks, people listen, and already her endorsement of the petition has helped spark thousands more sign-ups in support.

And if past history is anything to go by, Instagram should be listening to what Jenner says too.

Back in 2018, Jenner tweeted this comment in relation to Snapchat’s redesign, which many were similarly unhappy with:

That comment preceded a sudden decline in Snap stocks.

As reported by Vox:

“Jenner’s ambivalence regarding the app appeared to have an immediate effect on Snapchat investors. By Thursday at the close of trading, Snapchat’s stock had dropped 6 percent — an estimated loss of between $1.3 billion and $1.6 billion in market value.”

Vox further notes that there were several factors which played into this decline, it wasn’t just Jenner’s comments. But they were a significant element – though a similar Change.org petition to change Snapchat back to its original format also gained more than 1.2 million supporters at the time.

And it worked, in a way. Snapchat did switch back some features, and refine its approach, in line with user demand. So Jenner’s comments, along with the petition, did spark change.

Will that happen again this time around?

Really, it is a little annoying to see Instagram move further and further away from its original format, especially given that it’s clearly driven by TikTok, and its desperate bid to maintain relevance.

In many ways, that does make sense. Short-form video is the fastest growing content format on IG, and as user habits change, and Instagram continues to lose engagement time to TikTok, it clearly needs to evolve to meet shifting expectations.

The question then is, do people really want a TikTok-like experience on Facebook and Instagram, or does each app serve a different purpose?

And if that is the case, does Meta need to just accept that the usage of its apps will likely decline in favor of TikTok, at least in some elements?

It seems unlikely that Zuck and Co. will be willing to compromise, especially with their ad business on the line, which probably means that Instagram won’t be backing off, as such, despite this new push.

But there could be impacts. Again, when Jenner speaks, many, many people listen, which could ultimately drive more users to TikTok, the opposite of the intended effect of Instagram’s changes.