Instagram's Tap-Through Feed Test is Likely Not Done With Yet

The biggest social media news of the holiday period was no doubt the sudden roll-out, and subsequent roll-back, of Instagram’s new tap-through UI - essentially the Stories format for your main feed.

Users were shocked, surprised and ultimately - going by the related Twitter discussion - angered by the potential loss of the familiar scroll functionality, which, according to various reports, is what triggered Instagram’s quick reversal of what they called a ‘bug’, though that’s not exactly how it played out.

Due to a bug, some users saw a change to the way their feed appears today. We quickly fixed the issue and feed is back to normal. We apologize for any confusion.

The bug referred to was not the tap-through functionality itself (as some have suggested) but an issue with the test’s roll-out. Instagram had intended to release the new UI to a small pool of beta users, but it went out to everyone instead. That’s what triggered Instagram’s quick switch back.

If you were hoping that the platform simply read the critical tweets and re-thought it, I have some unfortunate news for you: that’s not what happened here, and it doesn't mean that Instagram is done with the experiment.

Really, Instagram’s tap-through test should come as little surprise. Various executives from parent company Facebook have been touting the shift to Stories for the last two years - “Stories is the future" proclaimed Facebook CEO Mark Zuckerberg back in 2016, while Facebook's Head of Product Chris Cox noted early in 2018 that "the Stories format is on path to surpass feeds as the primary way people share things with their friends".

That 's reflected in the usage numbers of the various Stories options. 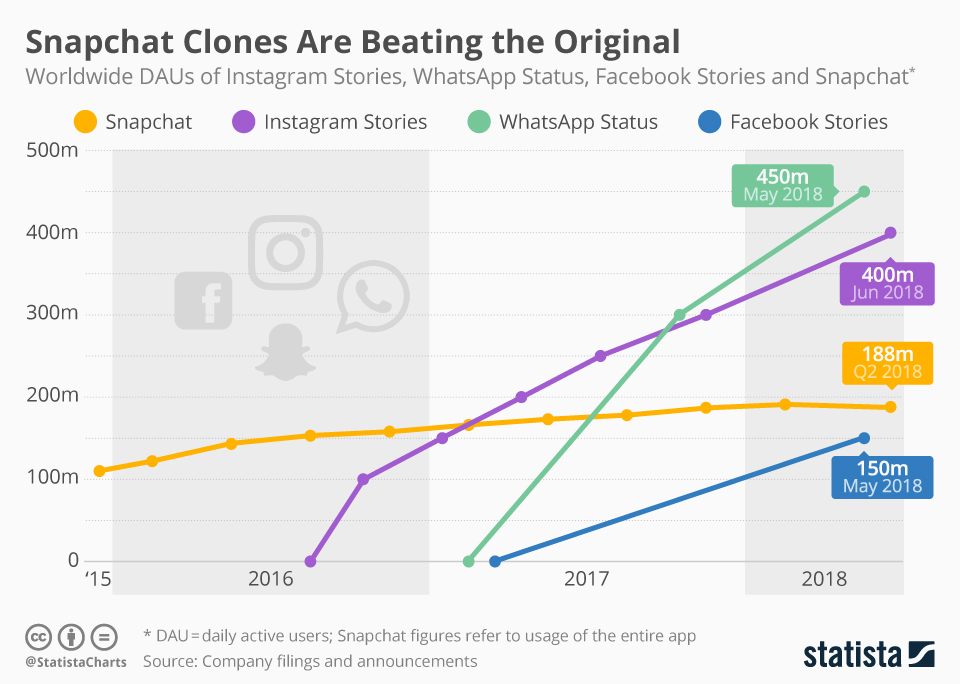 Given the emergence of the Stories format, which Facebook has clearly stated is the future of social sharing, it makes sense that they would try it out as the main option on Instagram, where almost half of its active users are already checking Stories everyday anyway.

Merge the functionality and you can ensure the app remains on trend, while also encouraging further Stories use.

The challenge for Facebook, however, remains monetization. While Stories usage is rising fast (more than a billion people are now using Facebook’s various Stories options daily), Facebook can’t show as many ads within Stories as they can within the News Feed. That’s a challenge for the company’s main app, but on Instagram, the tap-through functionality may actually produce better results for advertisers, as relevant promoted posts would take up the whole screen, and may have more presence (and prompt more recall) than those you can swipe past.

It may be subtle, but such a change could be relevant, and as Instagram looks to create more Stories-specific ad options, the new UI will make even more sense.

Make no mistake, Instagram’s not done with this test. The platform actually began a similar, small-scale test at the start of December, so they’ve been experimenting with the change for a while.

New Instagram UI to view posts on your feed: presenting "Cards", for iOS and Android!
In this new UI, the Profile and Direct tabs will be inverted!
The new changes will be available in future. pic.twitter.com/RVDNuuLvTk

It may not be popular initially, it might not be welcomed by users. But it is in line with broader social sharing trends.

The test was supposed to remain small at this stage, it wasn’t supposed to be released to everyone just yet. But it may still be coming.