With Stories usage on the rise, this could be a handy option. 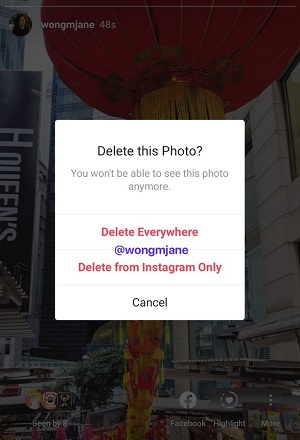 Cross-posting has become an increasingly common Stories trend, and many brands, in particular, have adopted cross-posting to their Facebook Story as a means of easy amplification of their Stories content. But having to remove content from each platform, specifically, can be problematic. As such, this seems like a logical, simple option to help better manage your Stories content - while the 'Delete Everywhere' tag could also suggest that you would be able to remove the same from WhatsApp as well, which is already implementing some cross-posting options.

As noted, while the Stories format hasn't taken off on Facebook in the same way that it has on Instagram, overall, Stories usage is rising.

Earlier this year, Facebook reported that it's now serving more than 1.25 billion Stories users each day across its family of apps (Instagram, Facebook, Messenger and WhatsApp), while Facebook Stories specifically is now up to 500 million daily active users.

Facebook CEO Mark Zuckerberg has previously noted that Stories are on track to overtake posts in Feed as the most common way that people share across all social apps, and the growing data does support the Stories shift.

Given this, it makes sense for Facebook, and Instagram, to add in new functionalities like this to cater to such usage. It wouldn't be a major shift, but it could be a helpful one for those regularly cross-posting.